Mechatronics Master of Science, Class of ‘21

The Michigan Tech Master of Science in Mechatronics, launched in 2019, has congratulated its first graduates this spring: Chinmay Kondekar (EE), Chukwuemeka George Ochieze, and Ahmat Oumar. Read their stories below. 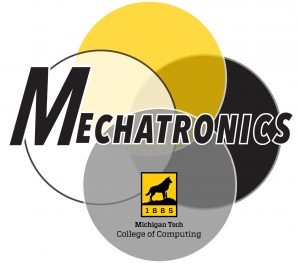 Ahmat Oumar was very interested in finding an engineering discipline combining the new engineering principles of the age of automation.

“I was looking for a discipline that will combine principles in electrical engineering, mechanical engineering and computer science,” he explains. “And the College of Computing Mechatronics program has been the right answer.”

“Michigan Tech Mechatronics has been a great learning experience for me,” Oumar says. “The frequent lab practices to apply the principles learned in class especially enhanced my learning. This will make it easier to make a smooth transition into industry.”

Oumar also credits his professors as instrumental in his success. “They make themselves available to students, not only in teaching and guiding, but also through mentoring.” 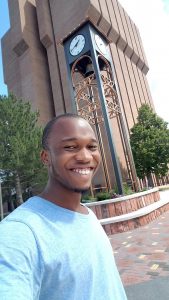 Chukwuemeka George Ochieze—now enrolled in a Ph.D. program at Michigan Tech—checked out the College of Computing Mechatronics master of science program a few years ago.

He was intrigued by the equipment available to students and the many research projects that could be accomplished within the program. Both aligned perfectly with his interests. And he regards the location of Michigan Tech and the region’s weather conditions as a good atmosphere for study.

“Mechatronics is important in this century because every system consists of different subsystems that require a particular mechatronics application,” says Ochieze. “For example, people who work on fluid power systems should understand automation and controls.”

Ochieze says that working with faculty and researchers in the various fields of mechatronics helped him to think differently with respect to the subject of application.

“I pursued so many projects while here on campus,” he adds. “My work with wearable devices shaped my interests and allowed me to apply what I’ve learned so far in the Mechatronics program. His current focus is on the robotics field, which Ochieze says stems from his exposure to robotics and programming in the Mechatronics M.S. program.

Ochieze was a mechatronics instructor in the 2020-21 academic year for the Career Technical Education (CTE) program in Mechatronics, recently launched by Michigan Tech and the Copper Country Intermediate School District (CCISD). The 12-month Career CTE program is for high school juniors or seniors. Read the story.

And Ochieze tried many indoor and outdoor events that includes, “skiing, indoor and outdoor soccer, skating, tubing, winter carnivals, career fairs, late nights in the library trying to figure out projects, passport to the world, to mention but a few.”

“Personally, I think the best memories I have was the career fairs events, having the opportunity to exchange information with people who have similar interests and also sharing your thoughts to people who have worked for a long time in the industry,” Ochieze says. 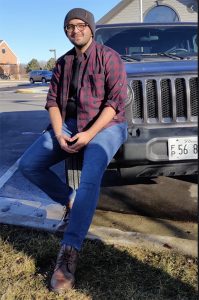 Graduate student Chinmay Kondekar heard about Michigan Tech during his undergraduate studies. Sometime later he read a social media post about work opportunities in the robotic and automation labs, and Michigan Tech again came to his attention.

“At that time, I was working as a controls engineer in India,” he says. “Robotics and automation interest me, and when I saw who had written the post (a former graduate student of Sergeyev’s), I knew I had found the perfect degree program.”

Kondekar’s final design project was to create an interconnected system that is flexible, reconfigurable, and controlled from a central control interface to emulate a production process. The system is used to machine different patterns on a block of foam.

“I enjoy solving problems and coming up with a solution to make things work,” he shares. “When starting the [final] project, I had a lot of unknown variables but I knew how to approach them and, eventually, I came up with solutions and made the system work. It’s highly rewarding to watch the finished system come together, and then to see it work automatically after pressing just three buttons.”

Kondekar’s project would not have been possible without generous support from Mr. Mark Gauthier and his team at Donald Engineering. “Mark has helped the department acquire the best industry-grade hardware, and his expertise in pneumatics helped the project concept become reality,” Kondekar says.

Kondekar says he has enjoyed his learning and life experiences at Michigan Tech. Plus, he loves the outdoors. “I am an outdoors guy and I love the UP, especially the summers. It’s full of good people and great beer!”