Sangyoon Han, Students Are Co-Authors of Paper in PLOS ONE 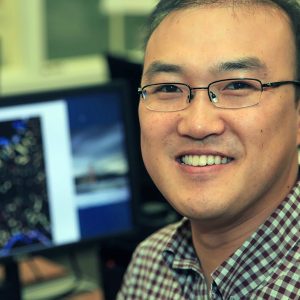 Sangyoon Han (BioMed) and undergraduate students Sue Kim and Sam Haarman are co-authors of a paper published in PLOS ONE.

Kim and Haarman performed the main simulation work, and Haarman is now in a graduate program with Han.

The paper presents a tracking method specialized in a specific application called traction microscopy where gel deformation is induced by only sparse contact points called integrin-based adhesions. When gel is very soft or cells are transmitting a huge amount of force, the gel is deformed a lot in a way that a conventional correlation-based tracking method fails to detect. The new method iteratively finds the missing vectors after the initial run using a median of its neighboring vectors.

Sangyoon Han is a member of the Institute of Computing and Cybersystems’s (ICC) Centers for Data Science (DataS) and Biocomputing and Digital Health (BDH).

The code of the implementation is included on the Han Lab website.