Metallurgical Engineering alum Bill Olson  posted a letter in From the Email Bag in TechAlum Newsletter for February 28, 2012. Read the story about life in married housing.

MSE graduate student Patrick Bowen has received an approval recommendation by the Michigan Tech Graduate School on his application for the DeVlieg Foundation Fellowship. The recommendation was based on Bowen’s research, publication record, and contribution to the mission of Michigan Tech. Bowen will receive support in the form of stipend plus one-credit of tuition for summer 2012.

MSE graduate student Tianle Cheng was recognized as outstanding graduate student scholar for her research, publications, presentations, academics, and collaboration with other students. She was nominated by Associate Professor Yu Wang.

Andrew Baker and Professor Stephen Kampe: “Effect of Melt-Spinning Parameters on the Formation of MnAl6 Quasicrystals.” 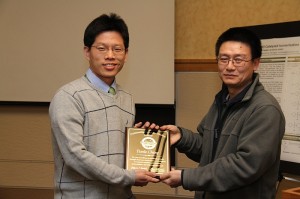 Andrew Baker and Stephen Kampe: “Effect of Melt-Spinning Parameters on the Formation of MnAl6 Quasicrystals,” which earned second place.

Here is a link to abstracts:

Here is a link to the GSG Research Colloquium:

HOUGHTON – Joshua Pearce wants to change the perception of solar power as a relatively expensive energy source used only in remote locations or by large utility companies, and hopes a recent analysis on the topic he was part of will help dispel that perception.

Pearce, who is an associate professor of electrical engineering and materials science at Michigan Technological University, said the analysis, “A Review of Solar Photovoltaic Levelized Cost of Electricity,” in the December issue of the science publication Renewable & Sustainable Energy Reviews, was begun by himself and colleagues at Queen’s University in Kingston, Ontario, and finished after he started at Tech this past summer.

“We had the study mostly done at Queen’s,” he said. “The journal it’s in only prints invited articles.”

The analysis printed in the magazine was a sort of extension of other work he and his Queen’s University colleagues had done, Pearce said.

“My group had done a lot of research on solar power for the Canadian government,” he said.

What that earlier research showed, Pearce said, was that costs for solar power have been dropping, largely due to better solar panel materials.

“We’ve made very significant progress on that,” he said.

Although the individual cells in most solar panels are still crystal based, Pearce said the materials they’re set in are better than the early days of solar panel technology in the 1970s. In the past, water would get into panels, leading to damage of the cells and panels and degradation of power output.

“Now, we have much better polymer backing,” he said.

Many panels have 25-year warranties, Pearce said. Annual degradation of power from a quality panel is 0.1 to 0.2 percent, rather than the previously assumed level of 1 percent or greater.

A relatively new technology involves the production of large sheets of material on which cells are placed in scribes engraved with lasers, Pearce said. Those are cheaper, but generally not as efficient as panels with individual crystal or polycrystal cells embedded in a polymer field.

The cost of solar panels dropped 70 percent since 2009, Pearce said.

After the burst of use of solar power in the 1970s, Pearce said there was a lull, which has since turned around.

“We’re back with industry support,” he said.

Costs for start-up for solar power are going to vary based on the system used, Pearce said, but panels can be purchased for about $2,000 each.

“A system of a few thousand dollars is in the reach of a typical middle class family,” he said.

Although battery costs are declining, also, Pearce said the trend by solar-power users is to connect to their local electrical grid, eliminating the need for batteries and lowering the cost of the system.

Depending on variables, including location and type of system, Pearce said the cost for electricity is going to be attractive to many people.

“Solar is already competitive or better than conventional fossil fuels,” he said. “We’re going down (in cost) and we’re only going to continue to go down.”

Pearce said factors in the cost per watt of solar power include location, efficiency of systems, ability to connect to an electrical grid, government tax incentives and the willingness of lending institutions to fund installations of solar systems.

Getting lenders to accept solar power is going to be extremely important to its growth, Pearce said, which is one of the effects he’d like to see from the recently-published analysis.

Pearce said some recent years have shown a 100 percent increase in the use of solar power all over the world.

Those uses include on houses, cottages and even big-box retailers.

Growth in the use of solar power should continue to increase, also, Pearce said.