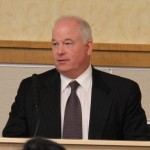 The mechanical engineering-engineering mechanics department held its semi-annual Senior Capstone Design Day Program. Eight teams presented the fruits of their efforts over the past two semesters during presentations to industry reps, faculty, staff, and students. The teams also displayed posters and, in some cases, their prototypes in the rear first-floor hallway of the MEEM building.

Mr. McGlynn graduated from Michigan Tech with a Bachelor of Science degree in mechanical engineering in 1984.

While pursuing his undergraduate degree in engineering, he was employed by Pontiac Motors in Product Engineering as a member of the Intake, Exhaust, Emission and Fuel Design Staff. Thereafter he was employed full time at an intellectual property law firm. During this period, he also attended Detroit College of Law on an academic scholarship where he served as Editor and then Managing Editor for the Law Review. He received his J.D.(Juris Doctor Law degree), cum laude, from Detroit College of Law in 1988. In 1994, he co-founded the firm of Bliss McGlynn, P.C where he practiced law for almost 20 years with, among others, Dan Bliss, a 1983 ME Tech grad.

Mr. McGlynn is admitted to practice law in the State of Michigan and before the United States Patent and Trademark Office. He is also admitted to practice before the Court of Appeals for the Federal Circuit and the Court of Appeals for the Sixth Circuit as well as several district courts throughout the country. He is a member of the State Bar of Michigan, the Oakland County Bar Association, the American Bar Association, the Michigan Patent Law Association, and the American Intellectual Property Law Association.

In this capacity, he oversees worldwide patent and trademark portfolios owned by his clients. In addition to his extensive litigation experience, he has served as both a facilitative mediator and expert witness in numerous cases including United States Patent Office procedural matters related to the infringement and validity of patents. He represents a full range of clients from large, multinational, multimillion and multibillion dollar corporations to individual inventors and trademark owners.

In July 2013, Bliss McGlynn, P.C. merged with Howard & Howard, a national law firm having offices in Michigan, Illinois and Las Vegas, where he continues to practice intellectual property law with Dan Bliss.

Most recently, he has been recruited to teach a class on patent preparation at The University of Notre Dame in South Bend, Indiana beginning in the Fall term, 2015.

Several awards were handed out for outstanding students.

Dr. Jim DeClerck, Formula SAE advisor nominated Chais Eliason for an Outstanding Enterprise Student Award. He said, Class Act is a good phrase to describe Chais. He gives 110% to everything that he does. As the Michigan Tech FSAE Chief Engineer, Chais was dedicated to a successful return to competition last May. When unexpected hurdles threatened this goal, Chais focused on solutions rather than problems. He guided the team through critical design changes to meet safety requirements and success at competition. More importantly, Chais’ dedication and leadership by example transformed the team to run like a professional race team that maintains an organized shop, achieves goals, and meets deadlines. Chais demonstrated to the team that positive attitude and professionalism gets results and earns respect. Chais’ approach has spread through the team and has improved the reputation of Michigan Tech FSAE. Thank you for your dedication and continue to make us proud.

Dr. Radheshyam Tewari nominated Shawn Hill for the Outstanding Senior Capstone Design Student Award for his outstanding display of sincerity, attention to detail, sense of ownership, and leadership toward the success of Team 56 Systems Control Wire Length Tool. Dr. Tewari stated, “How often do we come across a student so sincere that even when he absolutely needed to be with his family, he sent a relative to the SCD office to ensure that his task was done on time and that the team met the deadline? Shawn’s sense of ownership of not only his part in the project but also that of team mates’, who needed help, has been instrumental in not letting the team fall behind. Finally, his display of leadership in taking critical project responsibilities, stepping up effort when the team was pressed for time, and making sure the team’s performance, even with uneven skill levels among team members, was at par with the project expectations makes him truly deserving of this recognition.

Ben Kangas was awarded for the Outstanding Senior Capstone Design Student Award. Kangas is a member of Team 51, TI Automotive Modular Tube Bender. Having sound experience from working in a machine shop, this student brought a skill set of how things are made and how they work in a manufacturing environment. The strength of his CAD capabilities matched the level of those skills, allowing him to take a leading role in many aspects of his team’s project work. At the same time, he did not monopolize the work and idea generation activities. He instead played himself in an equal role, working well with the entire team that brought together the other complementary skills and knowledge to produce an outstanding result in both hardware and supportive software.

awards, Fall 2014, Order of the Engineer