Merit Response for Baby with the Bathwater Production 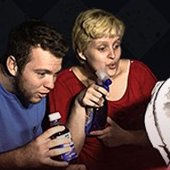 Additionally, the respondent nominated scene I-2 with Helen, John and Nanny to be considered for the Region III festival. (“Rose and the Rime,” which was presented by the Department of Visual and Performing Arts last February, is also under consideration.) Results will be announced after the first weekend in December.

The respondent also noted the strength of the production in technical direction (Josh Maiville) and in the system sound design (Jason Pew). The stage managers were recognized in the response.

“Baby with the Bathwater” is directed by Associate Professor Patricia Helsel, with set and costume design by  Professor M. C. Friedrich (VPA).

The show plays today and tomorrow and contains adult language and situations.