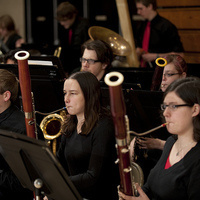 Bring your lawn chairs, bring your blankets. The Rozsa Center for the Performing Arts and Department of Visual and Performing Arts presents a concert by the Superior Wind Symphony (SWS), titled “Europe, America and the World,” a celebration of the music of WWI era band leader from Harlem, James Reese Europe.

The SWS will perform a free outdoor concert at 6 p.m. Friday, Sept. 28 on Walker Lawn.

If it rains, the concert will be held inside the McArdle Theatre, second floor of Walker Arts and Humanities Center.

Ensemble Recreates Mine Sound in Rozsa during Masterclass 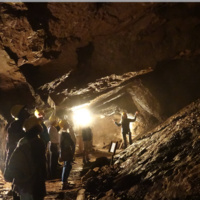 In an unusual turn of events, the University of Michigan Digital Music Ensemble (an experimental ensemble using electronic means to create sound art/concerts) is invited to perform in the Delaware Mine in Delaware, MI on October 7, 2018, which is located in the heart of the Keweenaw Peninsula. The ensemble will be presenting two concerts at the Delaware Mine, one at 6:00 and one at 7:30pm. Wine and Cheese reception above ground starting at 5:30pm. Space is limited to 40 people.

The group will rehearse in a “virtual mine” during September, and will write music during the Music in the Mines – Masterclass in the Rozsa Center for the Performing Arts on Saturday, October 6, 2018 from 10:30am to 12:00pm and then perform the arrangement in the Delaware mine and in Ann Arbor – emulating the ambiance of the mine in sight, sound, and smell.

Director, Stephen Rush, Professor of Music, University of Michigan, has visited the mine already, doing an impulse response which means capturing the acoustical behavior of the performance space/Delaware mine digitally – for reproduction in the Rozsa and in Ann Arbor. This means that during classes/rehearsals at U-M will “sound” like the mine. The students will also be reading two books, The History of the Delaware Mines and Life of Douglas Houghton by Steve Lehto. In these books, they will learn three major things: the economic and geological history of Michigan, the importance of specifically copper mining to the United States and Michigan, and a new aspect on the history of the University of Michigan.

As a Michigan native, I am deeply interested in the Copper industry (central to the founding of the state as well as the U-M) as well as the acoustical properties of the Mines that gave birth to the industry (and to the founding of the State).  Digital Sonic Analysis of unique spaces is still considered cutting edge technology, and unbeknownst to our students (and faculty) a subset of a standard musical program we now teach called “Logic©”, has an “impulse response” Plug-in, meaning that such digitization of interesting sonic spaces are including in the course materials of every student in our program (over 150 – majors and non-majors), but not necessarily taught.  Lecturer Jeremy Edwards and I have undertaken study of “impulse responses” as a preparation for this project – a new research area for me, and delightful. — Steven Rush

As discussed above, new approaches to both physical and historical context in music making will be delivered through this project. Through the support materials the students will have an expanded understanding of local/Michigan history as well as institutional history (University of Michigan).  This will be complemented by an exploration of Sonic appreciation of place, due to a new “angle” in the curriculum, a digital emulation of unique spaces. Every student will now be able to explore unique sonic spaces and emulate them digitally.

The students, as part of this project, will travel to the Upper Peninsula, live in a Yurt for three days, perform in an underground Copper Mine and collaborate with Michigan Tech faculty, students, and the Keweenaw community. Equally, students will be interacting with geologists, and historians. They will also learn about digital emulation of unique sonic spaces and a vastly expanded appreciation for the history of the state of Michigan and the University which they attend. The technology used by the class to emulate the mine in rehearsal will quickly transfer to the entire PAT (Performing Arts and Technology) community. It is a unique if non-complicated, technology. It will allow all students to explore the sound of the spaces they experience more fully.

Most students, down to the last one, have not even been in the Upper Peninsula and no student has performed in a mine before. They will also be living and cooking in the community for 4 days in a Yurt in a remote part of the Upper Peninsula.

The challenge is to address space and place. Rush notes “real listening is on the decline – due to headphone usage.  Actually listening to rivers, woods, trees, or large spaces, man-made or natural; cathedrals or caves is rare.  What is equally rare is the digitization of those spaces, history seems currently subject to opinion. The students will be asked to study the history, their own context, of our State and our University.”

During the masterclass, new music will be created specifically in reaction to the performing space. No such classes have been offered at the School of Music in the University of Michigan, Ann Arbor that dealt with the creation of new music for the space. There certainly has been location performances (UMMA/the Arb, etc.) to address this issue. Only the Dance Department has really explored this genre deeply. Site-specific performances are an extremely important genre in the Arts, even a sub-genre/category for NEA grants, etc. and new faculty lines that feature this as a specialty. This is literacy and experiential learning combined.

The concert in the Mine will recorded but the concert will be recreated in Ann Arbor with visual projections, the music that we performed in the mine (complete with digital emulation of the mine itself, as described above) and an attempt to create the musky smell of the mine.  The Michigan Muse (the alumni magazine of the school that reaches 11k alums) is also writing an article about the project.  In addition, the performance in Ann Arbor as well as at the mine will be shown/broadcast on YouTube.