The 13th Annual Student Awards Banquet: Recognizing Excellence and Leadership at Michigan Technological University was held on April 29, 2007 where SBE students started the night off with taking the President’s Award for Leadership.

The following SBE students were recognized at the awards banquet.

Other SBE students nominated for awards at the Student included Danielle Norton for the the Provost’s Award for Scholarship; Mairi Smith-Risk for Exceptional Leadership in the Residential Community; Kevin Brock, Jill Garrity, Mairi Smith-Risk, and Alex Tiseo for Exceptional Enthusiasm as a Student Leader; and Amber Tarver and Elise Vertin for Student Employee of the Year.

In addition, two SBE faculty were nominated for Student Organization Advisor of the Year: Jim Gale and Teresa Woods.

Only the best business students in the world, and the professionals who earned the distinction of “the Best in Business” during their academic careers, can claim membership in Beta Gamma Sigma. This year’s Beta Gamma Sigma inductees from Michigan Technological University’s School of Business & Economics have certainly earned that title.

Michigan Technological University and its School of Business & Economics congratulate the 20 students who have earned invitations in the 2006-07 academic year. They join an expanding worldwide network of more than 560,000 outstanding business professionals who have earned recognition through lifetime membership in Beta Gamma Sigma. Students ranking in the top 10 percent of the baccalaureate and top 20 percent of graduate programs at schools accredited by AACSB International – The Association to Advance Collegiate Schools of Business are eligible for this invitation.

Beta Gamma Sigma lifetime membership is truly an international honor. With the expansion of accreditation by AACSB International, membership is no longer limited to those who have studied in the United States or Canada. Beta Gamma Sigma has installed collegiate chapters and inducted students on five continents. The most outstanding Michigan Technological University students are eligible for the highest recognition a business student anywhere in the world can receive in an undergraduate or master’s program at a school accredited by AACSB International.

The following students were inducted into the Michigan Technological University chapter of Beta Gamma Sigma at the Spring 2007 ceremony held April 17, 2007:

With collegiate chapters on five continents, Beta Gamma Sigma today is truly an international society that remains dedicated to recognizing the most outstanding students of business and management. The Society serves business schools accredited by AACSB International in the 21st century knowing that its membership of more than 560,000 comprises the brightest and best of the world’s business leaders. 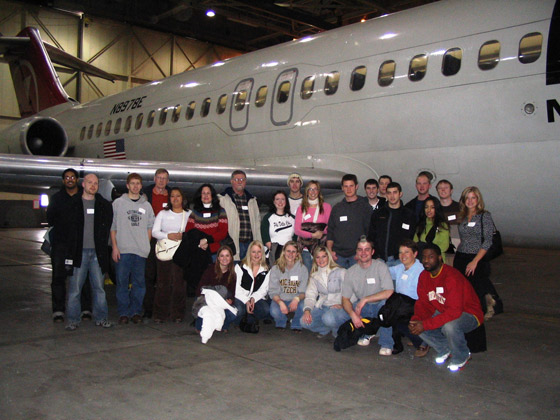 Phi Beta Lambda and MBA students traveled to the Minneapolis/St. Paul International Airport to tour Northwest Airlines. They were also given behind the scenes tours of the Summit Brewing Company and Wells Fargo.

At Northwest Airlines, the students were guided through a seven-hour tour of the operations visiting the maintenance operations, system operations control, and ground operations.

Northwest is currently looking for interns and full-time employees in marketing, finance, and operations. Most of the tour was based on the airline’s operations.

Dana Johnson, an Associate Professor of Operations Management, said that even after her experience in operations she was amazed at the extent of how all of the pieces fit together.

The group was treated to lunch and a presentation by Executive Vice President of Operations Andy Roberts. He mainly focused on the positives and negatives to the mergers and acquisitions going on in the airline industry. Mr. Roberts also discussed the demand for graduates in the airlines industry.

Ground control handles fuel, food, and gate services; they also assist systems operations control when there are schedule changes by working with gate agents and passengers. The group was also shown the extensive maze behind baggage, terminal, and tarmac operations.

During their Wells Fargo tour, the students learned about client investment services and career opportunities they offer.

At the Summit Brewing Company, the group learned about entrepreneur Mark Stutrud and his journey in funding and owning his own business. They also gained information on operations and marketing of the brewery, which happens to be employee-owned.

Phi Beta Lambda’s mission is to bring business and education together in a positive working relationship through innovative leadership and career development programs.