Michigan Tech’s campus is abuzz with activities leading up to technological innovations and ground-breaking advancements in various fields of engineering. While they may be successful as technologies, do they have the potential to offer opportunities for creating new businesses around them? Our senior year students provide the answer by undertaking the Business Development Experience courses (BUS 4991 and BUS 4992).

Offered as a two-course sequence – BUS 4991 in the fall and BUS 4992 in the spring – the Business Development Experience provides students with the perfect entrepreneurial learning experience and the opportunity to work alongside Tech’s engineering students, real-world innovators and entrepreneurs. Students assume entrepreneurial roles and work in teams on projects offered by the Enterprise program, Senior Design, MTEC SmartZone and the Innovation & Industry Engagement (IIE) office housed in the Advanced Technology Development Complex. The course provides an opportunity to integrate these entities into a sustainable entrepreneurial eco-system.

These two courses are taught by Dr. Saurav Pathak, who holds the title of ‘Rick and Jo Berquist Assistant Professor of Entrepreneurship and Innovation’ within the School of Business and Economics. This year, he has secured six projects for his Business Development Experience course for students to tackle. The majority of the projects for this academic year are sourced from entrepreneurs local to the Upper Peninsula. Among the projects supporting Tech’s surrounding community include a novel clothing protector for traveling professionals, a gravity-enabled wood pellet de-duster, and a patented new masonry brick-laying technology.

Another locally sourced project is brought to Business Development Experience students by Michigan Tech SBE instructor, Jonathan Leinonen. He will be mentoring students and requesting that they offer a fully developed online game related to and of interest to the Michigan Tech student and alumni body.

The course would also involve students finding a “route-to-market” for two patented technologies – offered as projects by the IIE office. Students would find ways to commercialize a new way of processing “red mud” – a toxic waste produced during the extraction of Aluminum from Bauxite – with hydrophobic polymers into useful items such as cat litter. The other project’s goal would be to identify the potential partnerships, applications, and competitive landscape of Graphene, a highly conductive and extremely strong transmittable metal. Graphene is thought to be the future technology for capacitors.

Throughout the process, students will gain skills from establishing a target market, conducting customer discovery, developing a business model, pricing framework, developing a financial strategy, proposing a prototype, and potentially deploying a commercial version of each product. Over the last three academic years (2011-12, 2012-13 and 2013-14), more than 60 students have undergone this entrepreneurial learning experience working across 18 technology-based projects provided by our partners. The academic year of 2014-15 will see 23 additional students undergoing this experience working over 6 projects.

In the past, project owners have made generous donations to show their support for our students’ efforts. This year, the Dean’s office has offered funding that would be used to enhance the student learning experience by letting them go outside the classroom and achieve tasks that are essential of any business development. Dr. Pathak’s vision for the coming years is to make this course a revenue generator for the SBE wherein only sponsored/funded projects would be considered.

Carly Harrington, Academic Advisor for the School of Business and Economics, explains the importance of the Business Development Experience in these projects,

This article was written with contributions from Dr. Saurav Pathak. 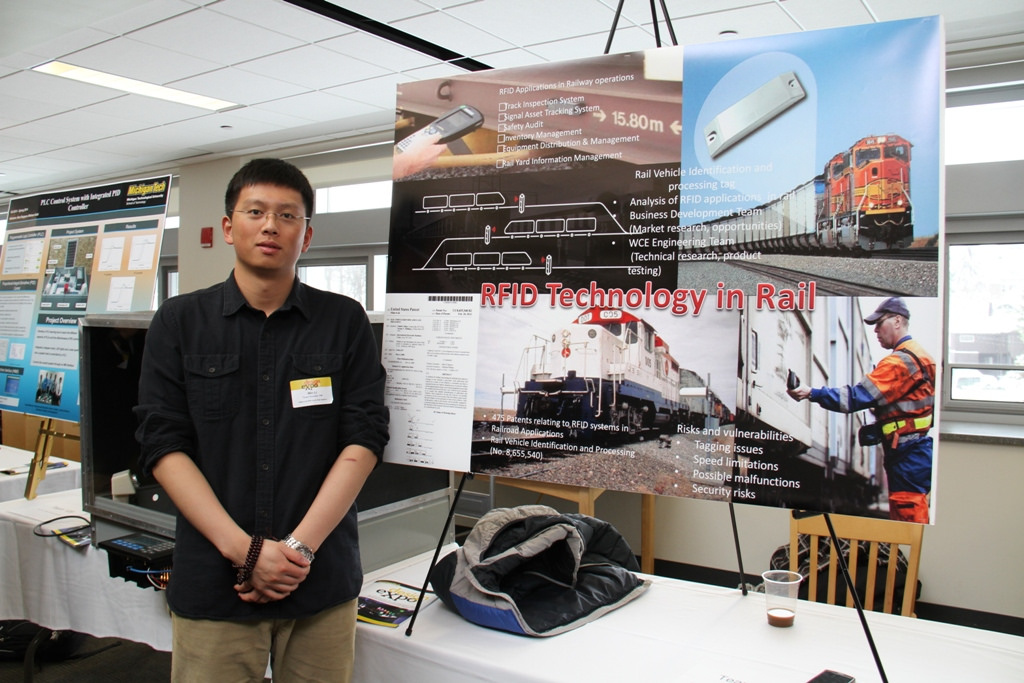 A team from the Business Development Experience Course (BUS 4992) tied for second place in the category of Design Expo Image Contest, in 2014’s Design Expo.  This accomplishment is particularly impressive, as over 600 Michigan Tech students across all disciplines competed in this year’s hands-on, discovery-based learning program, hosted by the Institute for Leadership and Innovation and the College of Engineering.

The team, titled “Balise and RFID Use in Rail Systems,” consisted of members Frank Kampe (’14, BS in Marketing), Min Li (’14, BS in Operations and Systems Management), Daniel Holmberg (’14, BS in Management), and Kevin Heras (projected graduation: Fall 2014, majoring in Management).  In order to participate in the Design Expo, team members took the Business Development Experience two-course sequence, where business school students ascertain the commercial viability of potential projects.  Since the implementation of the courses, business school students have been teaming up with the Enterprise and Senior design project teams to look at their technologies from a business perspective.

Team Advisor and Assistant Professor of Entrepreneurship and Innovation, Saurav Pathak, was pleased with his students and the work they conducted.  “This group in particular made valuable recommendations to Technical Expert Network (TEN) on how to expand the use of Radio Frequency Identification (RFID) technologies in the US rail industry,” Pathak remarked.  He added, “The fact that business school students were placed as award winners in an event that predominantly highlights the technological feats at Michigan Tech is proof that there is value in ascertaining the business prospects of these technologies.”

Congratulations to the team on their award!

Boots to Briefcases: Veterans as Entrepreneurs

As one million veterans return to the American workforce, some will venture into entrepreneurial employment, either as leaders or team members. One Michigan Technological University professor wants to find out if there is a difference between their initial interest and overall success compared to the general population; then he wants to give them a hand.

Saurav Pathak, Rick and Jo Berquist assistant professor of innovation and entrepreneurship in the School of Business and Economics, seeks to create a data set that will tell him how many returning veterans are going the entrepreneur route.

President Barack Obama sent an encouraging response to his email request for support. No money came with it, but Pathak will continue to try to secure federal funds, especially given the administration’s Joining Forces initiative that seeks to hire 100,000 veterans and military spouses by the end of 2013.

“I’ll first look at the skill set the veterans bring back with them,” he says. “There is some thought that the Air Force veterans have more technical background, for example, than Army or Navy veterans.”

Part of his research project, which is currently sponsored by the Michigan Tech Research Excellence Fund (REF), seeks to build more awareness and future connections between the Veteran’s Affairs Office, the University (including ROTC programs) and veterans themselves.

“These [REF] projects are funded as seed grants to help new faculty get their research programs underway,” says Dave Reed, vice president for research. “Typically, they are early stage or preliminary. Saurav’s work is a great example of these projects, and our faculty do a wonderful job of using results from these projects to leverage further funding.”

Pathak’s focus is on what hinders the veterans from beginning or succeeding as entrepreneurs.

“In Michigan alone, there are some 700,000 veterans,” he says. “And on campus there are about 90 veteran students and another 90 faculty and staff, mostly staff. If we can harness just a small percentage of them in a University center for entrepreneurship, we can help them succeed and propel Michigan Tech and the community into prominence at the same time.”

Pathak’s research grant expires in July 2013, so he wants to have the additional funding and a more defined project ready to launch by then.

“ROTC has shown great interest,” he says, “and we will be traveling to the Ishpeming, Marquette and Calumet Armories to talk about my work and see how much interest there really is.”

That’s one important component: actual data on numbers of veterans interested in entrepreneurship in the first place.

“I went to a veterans convention in Detroit, and there were 6,000 veterans there,” says Pathak. “We know that a lack of available resources hinders them, and we also think that there is difference between disabled veterans and those who are not.”

Disabled veterans are more likely to be working alone, he says. And many of the veterans seem to have been unaware of all the resources that are available to them.

“I don’t have the data set to completely verify this, but talking to veterans in Detroit, senior military people seem to be not as averse to taking risks,” Pathak observes. “Where junior officers are so used to taking orders that it might hinder them. Again, I need to do more research to verify these statements.”

Veterans’ well-being could affect their choices between necessity-based and opportunity-based entrepreneurship too, he says.

There has been previous research on entrepreneurship—for example, a Panel Study of Entrepreneurial Dynamics at the University of Michigan. But there is no study currently focusing on veterans in terms of entrepreneurship.

With or without help from the White House, Pathak seeks to understand veterans’ unique needs as they attempt to become entrepreneurs. Then, he hopes to help them succeed.

A paper that focuses on entrepreneurs in emerging economies was awarded “best paper” honors at the Second Global Innovation and Knowledge Academy in Spain. Its authors, Saurav Pathak, Andre Laplume and Emanuel Oliveira of the School of Business and Economics, were competing against 80 other papers at the academy, and eight received top honors.

“Neo-classical growth theory argues that technological progress is the main engine of economic growth, given that other factors have diminishing returns,” said Pathak. “Our key finding is that emerging economies with higher foreign investment per capita tend to have relatively lower techno-entrepreneurship rates.”