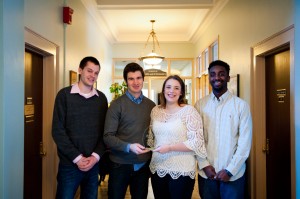 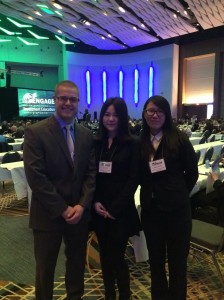 March 31, 2015 – It’s been said the only thing more difficult than winning a championship, is repeating. That is exactly what an Applied Portfolio Management Program team from Michigan Technological University has done.

For the second year in a row, the School of Business and Economics’ APMP team won the global investment competition at the Global Asset Management Education (GAME) Forum V, hosted by Quinnipiac University in New York City. The event, held March 19-21, attracted more than 1,200 students from 140 colleges in 40 countries and 39 states.

While in New York, the team participated in the NASDAQ Stock Exchange closing, attended presentations by some of the biggest names in the world of finance and visited with  APMP alums.

The APMP sent three students to the competition, Cory Sullivan, who participated in the NASDAQ closing ceremony, Heath Johnson and Derek Menard.

The results of the team’s investments were impressive according to Dean Johnson who is the James and Dolores Tretheway Professor in the School of Business and Economics and the APMP’s founding director. He says what sets the competition apart is the fact the students are investing real money–a lot of real money.

“The team manages $1 million through the Michigan Tech Fund,” Johnson explains. “These funds were explicitly donated to be managed by the students.”

He says the APMP team has done well with the fund’s money. Johnson says the team practices the concept of Risk Adjusted Returns, In which an investment’s return is measured by how much risk is involved in producing that return. Even more impressive is the fact the students themselves make all investment decisions. “They have complete control,” Johnson says. “They are hired by the APMP Advisory Board, but the students make each and every decision.

Heath Johnson, the only returning member from last year’s winning  team, says while there was a sense of pressure to repeat, the experience of having done it before was beneficial.

“After experiencing the competition last year I knew that we had to be mindful not only or our returns, but also the risk subjected to our portfolio.” Heath Johnson says.

“Our team really wanted to repeat last year’s impressive performance. Winning two years in a row out of 141 schools was incredibly exciting. We were able to outperform the market through very consistent returns while minimizing risk.”

Cory Sullivan says the overall experience was impressive on several levels. “From participating in the NASDAQ closing and having my picture appear in Times Square, to receiving advice from the biggest names in the finance industry, I realize the great opportunities APMP provides students,”

Indeed, the students hardly have time to enjoy the repeat victory. Heath Johnson, president of the SBE’s Finance Club and other members of the club traveled to the Chicago the following weekend for their annual trip to visit investment firms. Other members of the APMP traveled to Detroit Thursday and Friday to compete in the ENGAGE Investment Education Symposium and competition, hosted by Wayne State University.

Sullivan says the New York trip is just one of many experiences available to the team.  “We interact with great guest speakers on campus and via video conferencing, but we also get the opportunity to travel to both Chicago and Detroit to interact with investment professionals. “

Professor Johnson echoed that sentiment. “APMP students are gaining the experiences and education to be successful in the finance industry. Indeed, their success is already evident in their investment results.”

This article was written by Mark Wilcox and originally published on Michigan Tech News. 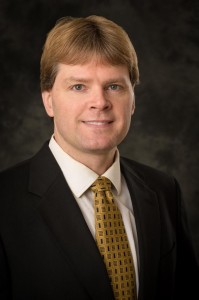 Dr. William Breffle, Associate Professor of Economics within Michigan Tech’s School of Business and Economics (SBE), has been selected as a finalist for the Distinguished Teaching Award, a notable recognition from the William G. Jackson Center for Teaching and Learning.

Based on 50,000 student ratings, five finalists were chosen for the 2015 award. The selection committee will be basing its ultimate decision on class surveying, and on recommendations from the Tech community. Staff, faculty, and all current and former students of Dr. William Breffle are strongly encouraged to submit a recommendation by Friday, April 3.

Associate Professor Breffle is consistently one of the SBE’s most beloved professors. In the 33 courses he has taught, Breffle maintains an average rating of 4.6 on student evaluations. He has an overall quality rating of 4.3 on Rate My Professors, being cited as inspirational and known to give amazing lectures. One student of EC3100: International Economics wrote in December 2014,

“In seven years of academia, Dr. Breffle is BY FAR the best professor I’ve ever had. Extremely passionate about his topic and wants students to learn. He uses real world examples to simplify the subject and is a fair grader. Took another class from him because he’s THAT good!”

Breffle is also an active researcher, having published over 20 peer-reviewed articles, including very recent papers in top journals such as Contemporary Economic Policy, Environmental and Resource Economics, and  Ecological Economics, among many others. His strong research record helps to keep his classroom curriculum on the cutting edge and directly related to real-world policy. His current research interests lay within environmental economics, non-market valuation, discrete choice modeling, benefit-cost analysis, restoration program planning, and health economics.

Breffle’s impressive resume also boasts numerous presentations at  institutions nationwide, including Colorado State University and Cornell University. He currently serves as article reviewer for 19 top journals in environmental economics and policy, and he remains a member of Mensa, Phi Beta Kappa, the American Economics Association, and the Association of Environmental and Resource Economists, among others.  A new father, Breffle has found a perfect balance between life with a newborn and his love for teaching economics.

Please submit a comment in favor of his award recognition by clicking here so that we can show Dr. Breffle how much we appreciate his hard work and dedication to Michigan Tech!