ESC/BRC Student Research Forum Winners Announced
The Ecosystem Science Center and the Biotechnology Research Center announced award recipients of the Ninth Annual ESC/BRC Student Research Forum, held March 27.
For the graduate students, two Grand Prize Awards and six Merit Awards were presented. They were selected from among the 59 posters and abstracts submitted by graduate students conducting research related to ecology, the environment and biotechnology at Michigan Tech.
Maria Tafur of the Chemical Engineering depaertment won a Merit Award for, “Reduction of Porcine Parvovirus Infectivity in the Presence of Protecting Osmolytes, ” Advisor: Caryn Heldt 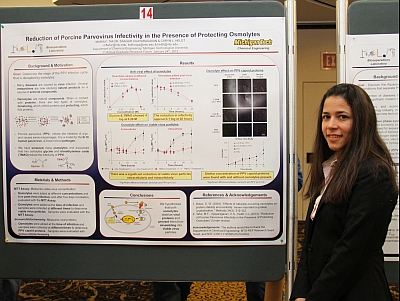 Four Michigan Tech Chemical Engineering students placed in the annual Minerals Processing division undergraduate and graduate poster competition during the Society of Mining, Metallurgy and Exploration (SME) Annual meeting in Denver on February 27. This annual poster competition showcases research from the top mining and mineral processing programs across the nation and is judged by some of the top engineers and scientists in industry and academia. It involved a five-minute oral presentation in a special session as well as a public poster display at a large SME gathering.

In addition, at the Awards Banquet that was held on Friday evening February 23, the Graduate School presented several annual awards, including the Outstanding Graduate Student Leader award that went to Howard Haselhuhn of Chemical Engineering. 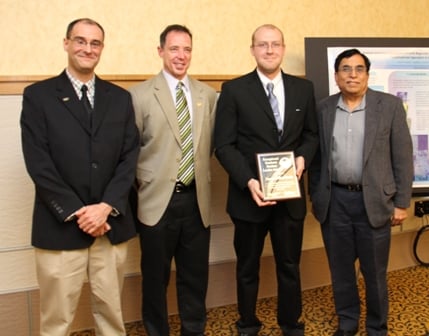 A team of six chemical engineering students will represent Michigan Tech in the 2012 National Chem-E Car Competition in Pittsburgh, Penn., on Oct. 28. They are one of 32 student teams competing in the American Institute of Chemical Engineers (AIChE) annual challenge.

Chem-E cars are small vehicles, about the size of a shoebox, powered by chemical reactions. 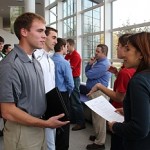 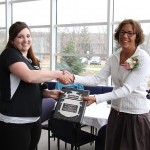 • View the Chem-E Car video
• View pictures from the event

For the Chem-E Car, team members design and construct a chemically powered vehicle within certain size constraints. This vehicle must be designed to also carry a specified cargo. The teams will be told at the time of the competition the distance that the car must travel and the specified cargo that the vehicle will carry. Entries deemed unsafe by the judges will be disqualified. The winner will be determined by a combined score, for traveling the correct distance, and for creativity. Teams compete at the regional conferences, the top 5 chem-e car teams from the region move on to compete at the national conference.

AIChE Jeopardy Contest, with the difference that the section only has topics in chemical engineering such as history, fluid flow, thermodynamics, heat transfer, and reactor design. There was also a Paper Competition and a Team Poster Session

• View pictures from the convocation

Gregg Zank joined Dow Corning in 1985. With more than 25 years of industrial experi-ence and a strong track record of scientific excellence, Gregg is a recognized leader in the scientific community and a pioneer in technological development. He holds 30 patents for innovations including advanced monolithic and composite ceramics, re-chargeable batteries and high-temperature thermosetting plastics. In his current position, Gregg leads Dow Corning’s innovation efforts, which include a unified approach to advancing and managing innovation for maximum future growth based on global megatrends. He also oversees the company’s resources and mecha-nisms for the development of new ideas and solutions, including a Business & Technol-ogy Incubator. In 2009, Gregg received the Earle B. Barnes Award, given by the American Chemical Society, for his accomplishments in scientific leadership, invention, staff development, and business impact. He was named to Senior Vice President in 2009.