In 2011, Computer Science faculty member Charles Wallace began what is now Copper Country Coders. The outreach began because Wallace wanted to teach his own children the programming language Python.

“There is a nationwide lack of computing curriculum in middle and high schools,” explains Wallace. “I saw this gap locally and I started to teach some free after-school coding classes at Houghton Middle School, where my son was attending at the time.”

Wallace conducted the classes on his own for a couple of years, then Computer Science faculty member Leo Ureel got involved.

“We wanted to help students over a barrier of perception that computer science and robotics is something only brainiacs can do,” Wallace says.

“In programming, perseverance is more important than super smarts,” Wallace adds. “It’s about problem solving and getting through that process. When it works, when students understand that this is something they can do, it’s super exciting to them. This gives youth a low-stakes, fun opportunity to get some programming experience and offers a broader view of how computer science fits in with life and the kinds of career options that are out there.”

Soon, Wallace and Ureel started recruiting Michigan Tech students to instruct the youth classes. “Giving Tech students the opportunity to work as educators is as important a goal as teaching the middle and high school students,” Wallace notes.

Now, with Wallace and Ureel as advisors, the Tech students are fully in charge of the program, from identifying the classes they’ll teach to drawing up lesson plans and conducting the classes to end-of-semester reflections about how they can improve the classes in the next semester.

While the program is free for all youth, through the Superior Ideas project, CS4All: Bringing Computer Science to K-12 Students, parents of the participating middle and high school students are asked to make a freewill donation to support the Copper Country Coders program. Through this fund, the student tutors receive modest compensation to conduct the youth classes.

Worldwide demand for 21st century workers with quality computer science skills is at an all-time high. Yet, providing CS education to students around the world presents many challenges. To help address this knowledge gap, Leo Ureel and Cassy Tefft de Munoz of the Michigan Tech Center for Educational Outreach (CEO) applied for and were awarded a U.S. State Department grant titled, “Copper Country Coders Virtual Courses for U.S. Embassy in Bahrain.”

“When we moved to an all-virtual learning experience due to COVID, it got us thinking about extending our instruction statewide, beyond the Copper Country region where Michigan Tech is located. But we hadn’t thought about extending halfway around the world!” says Charles Wallace.

The grant made it possible for the Copper Country Coders to reach out internationally through the U.S. Embassy Manama, Kingdom of Bahrain, an island nation in western Asia. The collaboration between the Michigan Tech Center for Educational Outreach (CEO) and Copper Country Coders supported five paid hourly undergraduate student positions as instructors, assistant instructors, and logistical support. The outreach continued a CEO partnership with Bahrain spanning several years.

The Copper Country Coders students developed and conducted the online classes—Beginning Web Development and Programming Games in Python— in October 2021, using methods to teach coding with emphasis on learning creative, hands-on problem-solving skills in an online environment. Their curriculum can be used for future courses, benefiting future students in Houghton, Bahrain, and locations around the world.

“The 40 middle and high school students in Bahrain were exposed to essential, in-demand computer science skills, which can help them achieve success in higher education and secure employment in 21st century businesses and industries,” says Ureel.

“Our CC Coders undergraduate instructors and assistants also benefitted from developing and teaching CS curriculum,” adds Ureel. “This required them to carefully think through the concepts being taught and practice explaining the concepts in simple terms. As the old adage goes, ‘the best way to learn is to teach.’”

Reaching Out: Closer to Home

“We’re hoping that this effort not only inspires our students to explore computing, but also think about Michigan Tech as an option after high school,” says Wallace.

Jacob Wysko ‘24, a Geospatial Engineering major with a minor in Computer Science, has been a CC Coders instructor for two years. The first year, as an assistant, he helped class leaders work one-on-one with students. This year, he was secretary and webmaster for the program, also leading an Intro to Java class, which gave the students a full crash course experience into programming.

“It has been an extremely rewarding experience teaching a subject I’m passionate about to an eager group of students,” says Wysko. “I’ve gained more education and leadership skills by having taken on this opportunity, and I have contributed to computer science education in our area.”

“It’s always great to see what the students come up with once they’ve learned a new programming skill,” he continues. “After learning the fundamentals, they have newfound freedom to create and design programs how they want, and have fun with the experience.”

“I once gave the students in my class the same programming task to help them practice using loops and conditional logic in their code,” Wysko recalls. “Everyone got the right answer, but everyone had a different and unique solution, and none were the solution I had in mind! It goes to show that there’s numerous ways to tackle and solve the same problem using code.”

Fifth-year Computer Science major Laura Albrant ‘23 participated in CC Coders for three years. She was secretary for her first two years, and served as president in the 2021-22 academic year.

“Being a part of Coders meant a lot to me,” Albrant says. “It taught me the value of patience and positive reinforcement, and I felt like I was giving back to the local community. I also made many friends with the fellow student leaders/teachers.”

“Coders helped me learn to articulate programming concepts and how to problem-solve on the fly,” she adds. “I usually joke that if I can explain what a variable is to a middle schooler, I can explain my code to anyone.”

Albant loved teaching the CC Coders classes, explaining that she could teach what she wanted to teach and make it as fun as she wanted to.

“The more fun the kids had with programming, the more fun I could have with it,” she says. “It was also extremely satisfying when a student would correct my own programming mistakes or errors, made either on purpose or by accident. To me, that meant they were learning, paying attention, and comfortable enough to call me out.”

Albrant recalls a particularly rewarding moment that occurred in her first year in CC Coders. She was working with her class on simple LEDs, bread boards, and Raspberry Pis. “The explanations for the circuitry and hardware were dense and it was taking a bit for the students to grasp,” she says. “However, everything made it so worth it when I saw each of the students’ faces light up as their LEDs started blinking as they had programmed it to do.”

In addition, several papers and posters about Copper Country Coders were presented by students and faculty at various conferences, some of them winning awards. 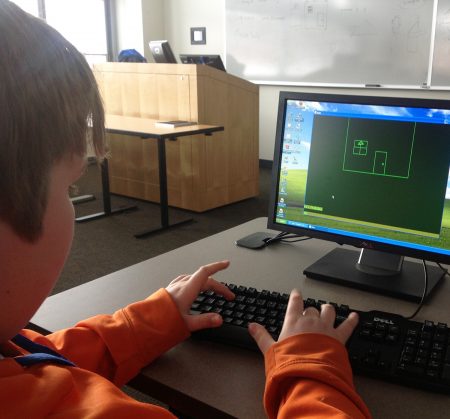 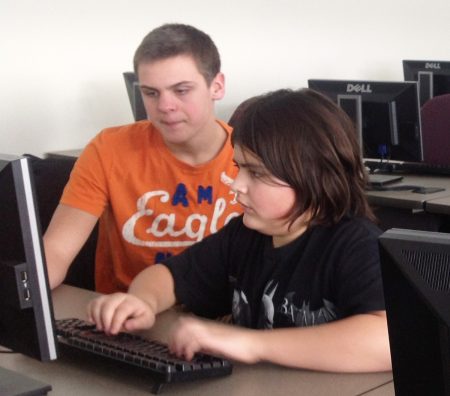