The Robots Are Coming! ROBOT101 Events to Explore All Things Robot 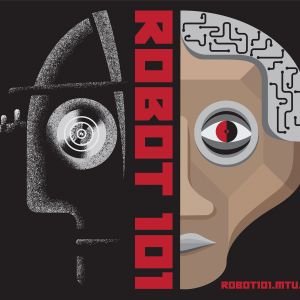 The word robot has been part of the human imagination for 101 years. Michigan Tech is celebrating this anniversary with a series of events called ROBOT101. Throughout the fall semester, there will be opportunities to learn about how faculty and student researchers at Tech are expanding the capabilities of robots, how people have used the idea of “robot” to explore what it means to be human and how robots will change our world. ROBOT101 activities include:

Book Discussion — “Klara and the Sun”
Students in many courses (ENG1101, CS1000, CS3000, HU2600, SS1001, UN1015) will be reading the 2021 novel “Klara and the Sun” by Kazuo Ishiguro. Set in a future that is quite similar to our present world, the story is told from the perspective of Klara, an Artificial Friend designed to provide companionship for a young person. Students will also sample some supporting media and materials, and there will be opportunities for students outside these courses to participate as well.

Film Screening — “After Yang”
In early October, the Rozsa Center will show the 2022 film, After Yang, which addresses similar themes to Klara. Yang is an android who provides companionship for an adopted daughter. In conjunction with the screening, the writer Alexander Weinstein will visit to discuss his story “Saying Goodbye to Yang,” on which After Yang is based.

Theatre Performance — “R.U.R. (Rossum’s Universal Robots)”
In mid-October, the Tech Theatre Company will perform the play R.U.R. (Rossum’s Universal Robots) by Czech writer Karel Čapek, which was first performed in 1921 and introduced the word “robot” to the world. Many of the themes we associate with robot-oriented science fiction can be found in this groundbreaking play. Visiting speakers Heather Love (University of Waterloo) and Jindrich Toman (University of Michigan) will provide context for the play and perspectives on its relevance today.

A growing slate of additional events will also take place during the Fall semester, including a wide variety of technical,  artistic, and historical perspectives on robots. Visit the ROBOT101 website to view the complete schedule of events, including dates, times, and locations.