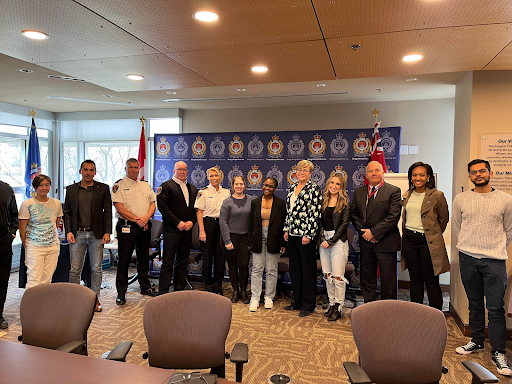 Members of the QSPS-PIL and Community Stakeholders

These are just a few of the problems associated with Queen’s University homecoming, an event over half-a-century old.

Dr. Adam Wellstead, Professor in the Social Sciences Department, helped the Queen’s University community address the problems of homecoming. He tool his public policy expertise on the road and all the way to Kingston, Ontario.

The goal: analyze the problems of and make recommendations for problems associated with this annual event.

But where were the test tubes? Many people might think of labs as rooms and buildings that house machines and equipment. However, labs, in general, are places, both virtual and physical. They provide opportunities for observation, analysis, practice, research, and experiments of all kinds.

That is, policy innovation labs (PILs) bring together diverse stakeholders who collaborate to analyze problems and issues. They focus on generating “out-of-the-box methods, approaches, and solutions to complex public policy problems.” PILs, which blend innovation with the co-production of knowledge from several groups, are known for being “arenas for experimentation.”

Rather than offering solutions only from the top-down, PILs promote divergent analysis and problem-solving by

Addressing the Problems of Homecoming

Before he arrived on the Queen’s campus, Dr. Wellstead’s first step was assigning Master of Public Administration students to policy lab experts from around the world (Australia, Canada, Netherlands, Poland, and the United States). Through virtual interviews, the students learned about various public policy approaches and methods. Next, following two intense days of preparation, the QSPS-PIL members applied these methods and approaches in consultations with various stakeholders:

After interviewing these various stakeholders and their experiences, the QSPS-PIL constructed a final written document: a 195-page final report.

This report offered seven recommendations, both broad and specific, for mitigating the problems associated with Queen’s University homecoming:

The richness of the recommendations speaks to both the range of homecoming problems and the depth of the public policy research by the QSPS-PIL.

However, this is not the first time that Dr. Wellstead participated in projects involving diverse stakeholders and intricate public policy issues. That is, as researcher and public servant for the Government of Canada for over 15 years, he regularly collaborated with research groups and communities. There, he honed his expertise in the complexity of policy making. His project at Queen’s University is only the most recent example of his respected, innovative research in public policy, policy capacity, policy design, and policy process frameworks.

Currently, he is working with other national and global experts on three different policy lab projects. Dr. Wellstead is the Principal Investigator (PI) on an NSF Grant on Policy Innovation Labs. Furthermore, with fellow Department of Social Sciences colleague Dr. Angie Carter and Dr. Anat Gofen (Hebrew University of Jerusalem), he is the PI on a US-Israel Binational Science Foundation (BSF) project. And with Dr. Bryan Evans at Toronto Metropolitan University, Dr. Wellstead is collaborating on a Social Science Humanities Research Council (SSHRC) grant.

Want to learn more about the applications of versatile, in-demand public policy skills? Contact Dr. Wellstead at awellste@mtu.edu. Or check out the online certificate in public policy at Michigan Tech’s Global Campus.