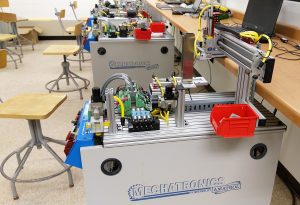 Graduate student Chinmay Kondekar heard about Michigan Tech during his undergraduate studies. Sometime later he read a social media post about work opportunities in the robotic and automation labs, and Michigan Tech again came to his attention.

“At that time, I was working as a controls engineer in India,” he says. “Robotics and automation interest me, and when I saw who had written the post (a former graduate student of Sergeyev’s), I knew I had found the perfect degree program.”

Kondekar’s final design project was to create an interconnected system that is flexible, reconfigurable, and controlled from a central control interface to emulate a production process.

“We decided on machining as the process because it is tricky to program and one of the more challenging applications for an industrial robot,” he says.

The system has a number of industrial applications. “Most of the robotic work cells in the industry have similar control and communication layout,” Kondekar confirms.

The system is a result of combining multiple components that are controlled from a central interface by a method called systems integration. Similar manufacturing system layouts can be commonly found in the automotive, pharma, and food industry.

The system is used to machine different patterns on a block of foam using various robotic attachments. Correct dimensions are assured using machine vision, and by transporting the workpiece between different stations.

What sparked Kondekar’s interest in creating the system was the challenge presented by the hardware and software interfacing required, which is accomplished through hands-on work and software programming, which he enjoys immensely.

“I enjoy solving problems and coming up with a solution to make things work,” he shares. “When starting the project, I had a lot of unknown variables but I knew how to approach them and, eventually, I came up with solutions and made the system work. It’s highly rewarding to watch the finished system come together, and then to see it work automatically after pressing just three buttons.”

Kondekar had some background knowledge going into the project, gained during his employment as a controls engineer. In that position, he worked on boiler, turbine, pharma, and automotive automation verticals, making “the PLC part of the project easy.”

His background in electrical engineering also made the controls and wiring easy. “But I had to learn robotics and electro-pneumatics from scratch, as I had never worked on either of them,” he says.

Kondekar’s project would not have been possible without generous support from Mark Gauthier and his team at Donald Engineering. “Mark has helped the department acquire the best industry-grade hardware, and his expertise in pneumatics helped the project concept become reality,” Kondekar says.

Kondekar has worked as a teaching assistant, an instructor for high school students and engineering undergrads, and a student researcher for Professor Aleks Sergeyev, Applied Computing.

“Aleks has been a wonderful mentor and a great advisor,” Kondekar says. “I love his vision and his approach towards automation and robotics. I will definitely miss working with him, and I look forward to opportunities to work with him again.”

“Chinmay is a very knowledgeable student with a great work ethic,” says Sergeyev. “Through his study and research, he acquired all the needed skills to become a very successful contributor to the industry. I certainly enjoyed working with him”

For the next few years, Kondekar sees himself working in the automation and controls industry for systems integrator companies. He’ll soon start a controls engineer position with Patti Engineering, Auburn Hills, Mich. Research work has been interesting for him, and he says he would consider a PhD opportunity in the future.

Professor David Labyak (MMET) helped Kondekar with the machining aspect of his project. “He is one of the best teachers I have ever had,” he says. “I would look forward to working with him in the future, as well.”

During his high school teaching experiences—for a local mechatronics program—he worked with Professor John Irwin (MMET), whom he also identifies as a mentor. “I like his approach towards mechanical and mechatronics education, and would like to work with him in the future,” Kondekar says of Irwin.

He says he has enjoyed his learning and life experiences at Michigan Tech. Plus, he loves the outdoors. “I am an outdoors guy and I love the UP, especially the summers. It’s full of good people and great beer!”

Michigan Tech is celebrating the accomplishments of more than 1,000 undergraduate and graduate students who completed their degrees by the end of the spring 2021 semester. Despite the lack of a formal ceremony due to COVID-19 restrictions, more than 600 undergraduate and graduate students are expected to participate in a physically distanced celebration tomorrow (April 30) throughout the afternoon.

The Graduation Celebration website shines a spotlight on the graduating class and provides links for graduates, their families and friends, and the community. Graduates and alumni can share their favorite memories and view profiles created by the Class of 2021.

One of the highlights of Michigan Tech’s traditional commencement ceremony is an address by a member of the graduate class. Even without a formal ceremony, remarks by this year’s student speaker, Tanner Sheahan, can be viewed on the Celebration Messages page of the Graduation Celebration website.

Sheahan, a chemical engineering major from Bay City, Mich., is enthusiastic about the message he’ll share with his class. “I love writing, and I think I have a knack for telling stories. I had fun — this has been a great experience,” he said.

Because of COVID-19 restrictions, Sheahan’s internship last summer was conducted virtually, but it had a very positive outcome. “The situation really opened up extreme doors and led to a job as a sales operations manager at Nalco Water, an Ecolab Company in Naperville, Illinois,” he said.

University President Rick Koubek congratulated MTU’s newest alumni. “On behalf of Michigan Tech’s entire faculty and staff, we wish you the very best in your future endeavors and trust you will do great things with your degree from Michigan Tech,” said Koubek. “Congratulations again on this tremendous accomplishment.” 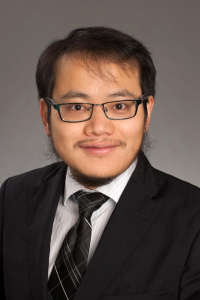 Jidong Xiao, an assistant professor in the computer science department at Boise State University, will present a talk on Wednesday, May 12, at 3:00 p.m.

In his talk, “Identifying New Threats in Cloud Environments,” Dr. Xiao will present two research projects focusing on a concept called virtual machine extrospection and a new type of rootkit, which allows attackers to perform active or passive attacks in a nested virtualization environment.

Cloud computing has become prevalent over the past decade. While individuals and organizations rely on cloud computing more and more, various security problems in cloud platforms are discovered. In this talk, I will present two research projects. In the first project, I will present a concept called virtual machine extrospection, in which attackers or cloud customers collect sensitive information about the physical machine from within a virtual machine. In the second project, I will present a new type of rootkit, which allows attackers to perform active or passive attacks in a nested virtualization environment, and then I will describe our detection approach. At the end of the talk, I will briefly discuss my future research projects and plans.

Dr. Xiao’s research was recognized in different venues, including publications that won the best paper award at the USENIX Large Installation System Administration Conference (LISA) 2015, won the distinguished poster award at the Network and Distributed System Security Symposium (NDSS) 2016, and won the best paper award nomination at the International Conference on Dependable Systems and Networks (DSN) 2020. Dr. Xiao has been awarded several grants by the NSF, NSA, and the Army Research Office (ARO). 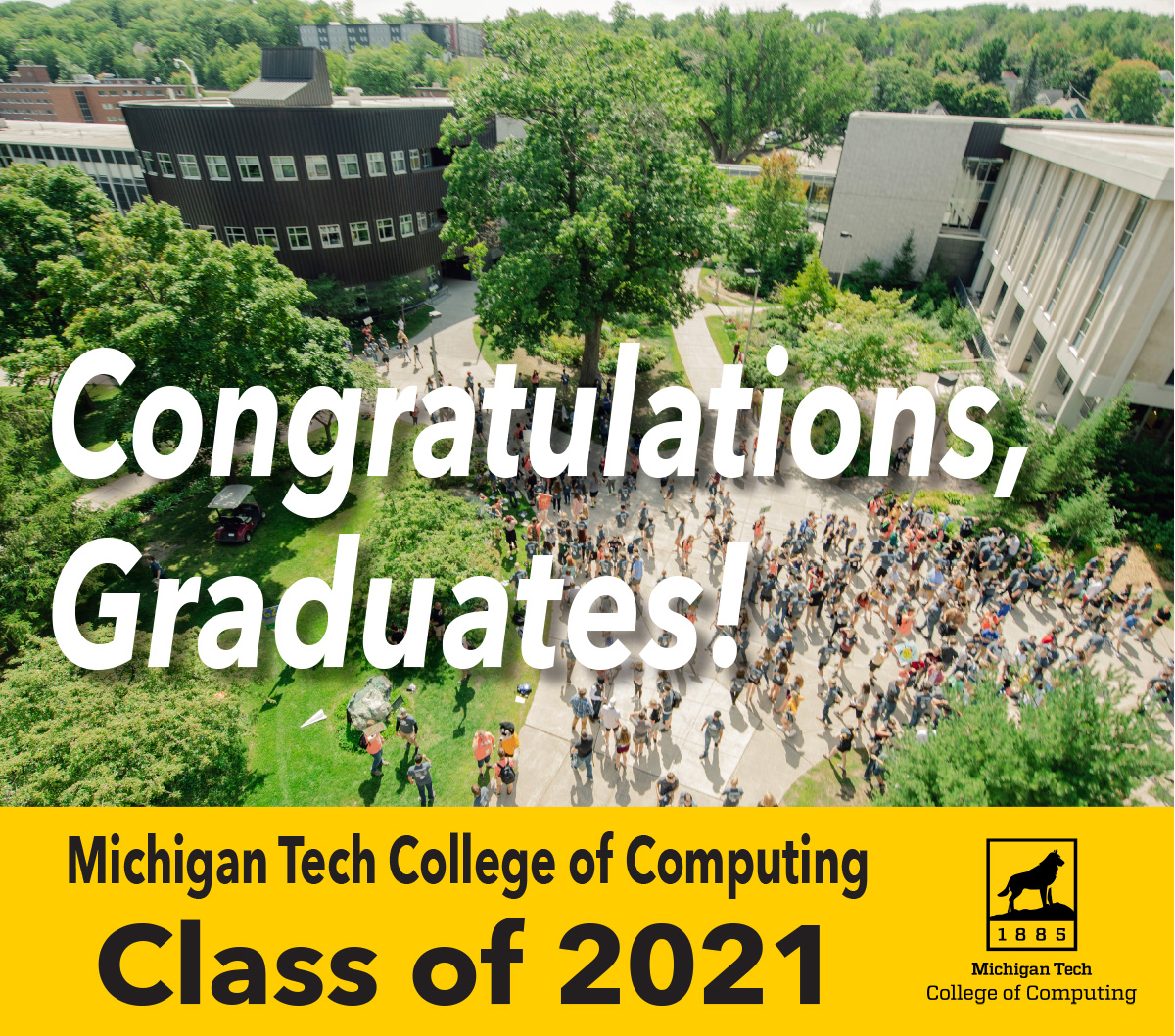 It has been a challenging academic year, to say the least. As part of the Class of 2021, you are an exceptional group of graduates. Your final academic year presented you with unforeseen and unprecedented challenges, yet you persevered.

We are all proud to have mentored, instructed, and supported you on your educational journey. We know you’ll do well. You are a Husky, after all!