Current AKA President Mary Rudisill, director of the School of Kinesiology at Auburn University, says, “The American Kinesiology Association is dedicated to advancing our academic discipline through providing advocacy, resources and leadership development and training. We rely on the top leaders in the field to lead this effort. Dr. Jason Carter meets this criteria and is already making significant contributions in his new role.”

AKA Executive Director Amelia Lee, says she’s had the chance to work with five different AKA presidents over the years, comparing Carter favorably to his predecessors.

“President-Elect Jason Carter ranks among the best as far as having the qualities that I consider good leadership skills,” she says. “He is confident, has the ability to inspire others, is willing to listen, follows through on issues, makes good decisions, is inclusive and always builds consensus.”

Lee says the AKA is very fortunate to have Carter on the leadership team. “I look forward to working with him over the next three years.”

Carter has been a member of the AKA leadership team for the past five years, three as a board member and two years as an executive committee member. Carter says he’s “humbled and honored that my colleagues have entrusted me with such an important leadership role.”

“I’ve been blessed to have great mentorship throughout my career, both here at Michigan Tech and with colleagues across the country. I’m eager to pay it forward with other kinesiology chairs and faculty.”

Bruce Seely, dean of Michigan Tech’s College of Sciences and Arts says Carter’s election to this prestigious position is a positive reflection on him, his department and the University.

“Jason’s election as president-elect of the American Kinesiology Association is yet another indication of the recognition that he has built for his program of teaching, research, and scholarship,” Seely says.

“The endorsement of his peers, which is well-earned indeed, reflects the hard work and dedication that he brings in abundance to everything he does. But almost as important, this type of honor also serves to increase the awareness of his peers concerning the program of education and research built-in KIP over the past dozen years or so. So it’s good for him and for the University as a whole.”

Carter agrees that his ascension to a national post reflects positively on Michigan Tech.

“While I’m excited for this as a professional growth opportunity, I’m perhaps more happy the position contributes to Michigan Tech’s strategic goals of fostering national recognition of the institution. Kinesiology programs are typically one of the largest majors at most comprehensive universities, including the top-ranked public institutions across the U.S. It’s a great opportunity for broadened national exposure for Michigan Tech.”

Carter earned both his bachelor’s and Ph.D. degrees from Michigan Tech. He began teaching in the then-Department of Health and Physical Education. He was named chair of that department in 2006 and remained chair when it became the Department of Kinesiology and Integrative Physiology in 2011. He has served as associate dean of the College of Sciences and Arts and is currently assistant to the vice president for research for research development.

The American Kinesiology Association promotes and enhances kinesiology as a unified field of study and advances its many applications. The AKA defines kinesiology as an academic discipline that involves the study of physical activity and its impact on health, society, and quality of life. This includes, but is not limited to, areas of study such as exercise science, sports management, athletic training and sports medicine, socio-cultural analyses of sports, sport and exercise psychology, fitness leadership and more.

Applications for summer 2017 Portage Health Foundation Graduate Assistantships are being accepted and are due no later than 4 p.m. Feb. 14 to Debra Charlesworth in the Graduate School.

Students are eligible if all of the following criteria are met:

Priority will be given to students originally from Houghton, Keweenaw, Baraga or Ontonagon counties. Non-resident students and international students are encouraged to apply if their health research is applicable to health needs and job shortages of our local community (obesity research, rural health, medical informatics, drug delivery and lab testing, physical therapy, etc.).

These assistantships are available through the generosity of the Portage Health Foundation. They are intended to recognize outstanding PhD talent in health-oriented research areas. Applicants should be catalysts for promoting and improving the overall health of residents in Houghton, Keweenaw, Baraga and Ontonagon counties through one of the following: 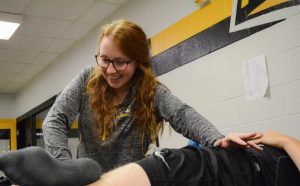 Randy Owsley made an impact that would last a lifetime, in fact, beyond his lifetime. During the 18 years he was the Head Athletic Trainer for Michigan Tech, he worked with a group of student trainers who bonded with him and with each other. Even after Randy left Tech in 1988, he continued to influence them and their careers. That cadre of former student trainers have remained close today.

The scholarships are designed to create opportunities for students participating in Michigan Tech’s Athletic Training Internship Program, for those enter health science and engineering professions.

The $500 scholarships, which are renewable for an additional semester, are named after the late Randy Owsley, who spent 18 years as the Huskies’ head athletic trainer and passed away in 2015. Former student athletic trainers who worked with Owsley worked in launching the scholarship as a means of keeping his name associated with Michigan Tech and to show gratitude for the service he provided athletes and life lessons he taught student trainers.

The scholarships were presented at a ceremony this past fall.

This year’s scholarship winners are:

In addition to submitting their resume, applicants were required to submit a 300-word written response or one-to-three minute video response addressing two questions; “How has athletic training internship played a role in health promotion in our local community” and “How has the athletic training internship helped you academically and in the profession that you desire.”

Jason Carter, Professor and Chair of Michigan Tech’s Department of Kinesiology and Integrative Physiology, says he was impressed with the quality of the applicants.

“These are excellent students from multiple majors and I am very pleased they will have a chance to be rewarded for their high levels of engagement with our athletic trainers and our sports teams. They deal with amazing real-world situations that will prepare them well for careers in health care professions,” Carter said.