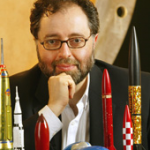 The ME-EM Graduate Seminar guest speakers on Thurs. Feb. 27 at 4:00 in 103 EERC will be Dr. Edgar Choueiri from Princeton University.

Starting with a brief review of the three main methods for 3-D sound reproduction over loudspeakers: 1) Wave Field Synthesis, 2) Ambisonics, and 3) Binaural audio through two loudspeakers (BAL), we focus on recent advances with the third method. I will show that crosstalk cancellation (XTC) allows BAL to deliver to the listener the necessary cues for real 3-D audio but that it inherently imposes an intolerably high spectral coloration on the audio. I will describe recent breakthroughs, which allow producing optimized XTC filters that impose no spectral coloration. I will then discuss the two other problems that have retarded the commercialization of XTC: the fixed and single sweet spot problems. I will show how the first problem is solved through advanced head tracking; and the second problem is solved using head tracking and phased array speakers, allowing the delivery of high-spatial-fidelity 3D audio to multiple moving listeners in real listening rooms. Following the talk, there will be a demo with playback of recorded music and natural sounds.

Edgar Choueiri is Professor of Applied Physics at at the Mechanical and Aerospace Engineering Department of Princeton University, and Associated Faculty at the Department of Astrophysical Sciences, Program in Plasma Physics. He is also Director of Princeton University’s Engineering Physics Program and Director of both the university’s Electric Propulsion and Plasma Dynamics Lab and its 3D Audio and Applied Acoustics (3D3A) Lab. He is the author for more than 175 scientific publications and the recipient of numerous awards and honors. His recent work on 3D audio has been featured by BBC Radio, NPR, The New Yorker magazine, The Discovery Channel, and The Atlantic magazine. His BACCH 3D Audio technology has been licensed by Princeton University and is commercially available in consumer and professional audio products.