Randy Isaacson (’86) will be on campus March 1st and 2nd as part of the Scott Pattullo Visiting Executive Speaker Series. Join our School in welcoming Randy at one of these opportunities:

Randall E. Isaacson graduated from Michigan Technological University in 1986 with a BS in Biological Sciences and an MS in Rhetoric and Technical Communication in 1988. His master’s thesis studied language patterns in small group communication during simulated scientific problem solving.

He began his career as a medical copywriter at Roche Pharmaceuticals in New Jersey, and later joined VICOM/FCB, a medical advertising agency in New York. After moving to Chicago in 1990, Randy worked as a copy supervisor at Frank J. Corbett, before joining a new agency, Williams‐Labadie, in 1992. Since then, Randy has risen through the ranks as copy supervisor and creative director, and is now executive vice president at Williams‐ Labadie.

Randy and his team have won numerous awards in healthcare advertising, including recognition from Medical Marketing and Media for creating the best pharmaceutical advertisement in 2003 and the best professional digital campaign in 2007. His multidisciplinary background in biology and technical communication was excellent preparation for a very successful career in healthcare marketing and advertising.

He has maintained an ongoing relationship with Michigan Tech by providing strategic marketing guidance for the School of Business and Economics and the University, and financial support for Rhetoric and Technical Communication graduate students. He has also taught classes in the School, and hosted students for a half‐day seminar on healthcare advertising at his office in Chicago. He has developed a reputation in the industry for his ability to transform complex scientific concepts into simple, compelling marketing campaigns. 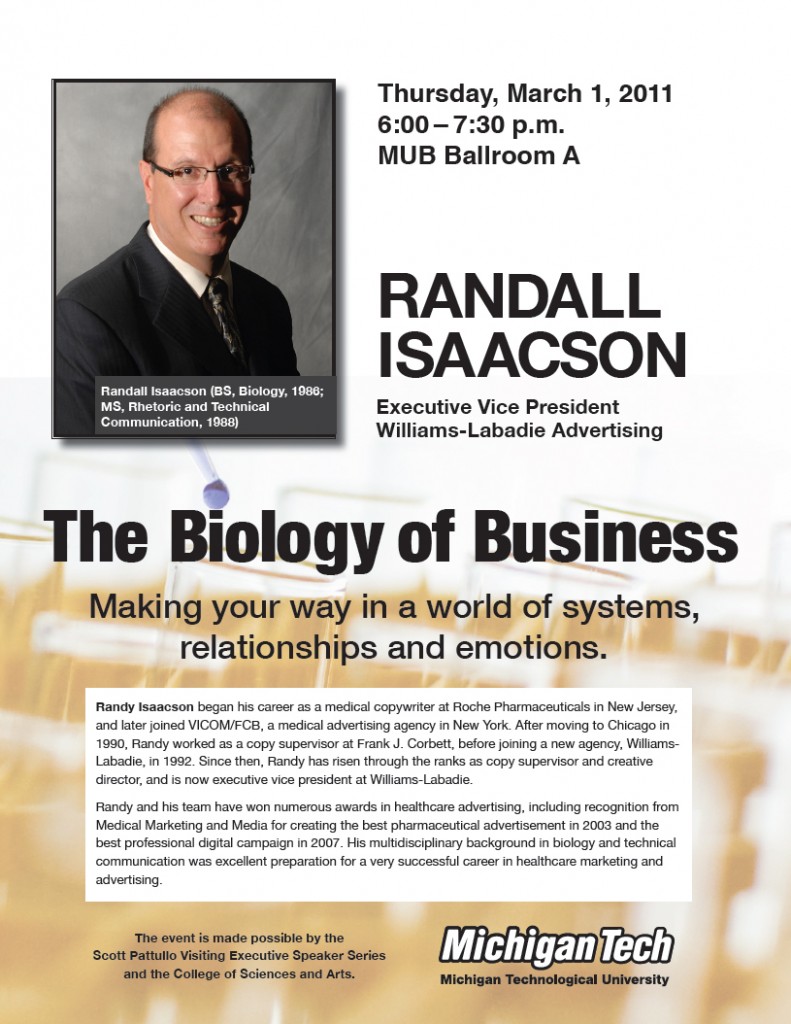 Join the School of Business and Economics and Assistant Professor in Marketing Junhong Min for a brown bag lunch presentation on Wednesday, February 22nd at Noon in Academic Office Building 101. The campus community is invited to attend.

His presentation is titled: “Practical Guidelines for Online Educators.”

Junhong Min earned his Ph.D. in Marketing from the State University of New York at Binghamton as well as a Master of Marketing Research (MMR) from the Southern Illinois University at Edwardsville. Prior to entering the Binghamton Ph.D. program Junhong Min was a senior research executive at Nielsen, NY. He has also served as a marketing consultant for a variety of marketing research projects. He brings this practical background to both his research and teaching efforts.

Anchors aweigh, steady as she goes, and full speed ahead! These have been the hallmarks of Martha (Marty) Kresnak Richardson’s career. An expert in marketing and a sailing enthusiast, Richardson’s connection with Michigan Tech came about in a less traditional way.“I was actually the first professional that Michigan Tech ever hired to serve in a marketing capacity,” recalls Richardson, who first arrived at Tech in 1976 with a bachelor’s in communication arts from Michigan State. Her commitment to Tech remains strong, now as chair of the Board of Control.

While employed by Tech, Richardson pursued a master’s degree in the School of Business and Economics with a specialty in marketing. “Most of the students were engineers wanting to get more of a business acumen. So, I was a bit different from the usual student at that time. I worked full time and still managed a pretty heavy course load.” After graduating, Richardson found that women with a master’s in business were rare commodities. She was offered a number of great opportunities and chose to work for the international accounting and consulting firm Coopers & Lybrand (now PricewaterhouseCoopers) in the Detroit area.

This began a ten-year career with a variety of positions of ever-increasing responsibility. From marketing supervisor to marketing manager to marketing director, Richardson saw many different facets of the company. “I traveled across the country, working with top management for their ninety-eight offices. I really learned a lot—certainly a big expansion of my master’s education.”

While enjoying her work with Coopers & Lybrand, Richardson dreamed of starting her own business. The best advice she received was from another woman entrepreneur in New York where Richardson had an office at the time. Richardson recalls, “She said, ‘Are you sure you want to do this? This is going to be the most difficult thing you’ve ever done.’ And she was right. It was the most difficult thing I’ve ever done. But, I’m proud of it and really wouldn’t change a thing.”

Richardson’s business, founded in 1989, was Services Marketing Specialists (SMS), a consulting firm providing full-service marketing and communications support to professional service firms and business-to-business organizations. Ironically, her first client was Coopers & Lybrand. Her portfolio grew into several hundred clients across the US and Canada, including those specializing in accounting, architecture, engineering, law, and health care.

However, another dream was waiting in the wings, or rather at the dock, for Richardson and her husband, Jerry, a former engineering manager for General Motors. Since leaving Detroit in September 2007, the Richard sons have logged nearly 12,000 nautical miles on a fifty-two foot trawler they named Monarch. They have traveled up and down the Atlantic Coast, to the Florida Keys, and the Bahamas. “We named our boat Monarch because she goes from Ontario and northern Michigan all the way down to the Gulf of Mexico just like the monarch butterfly,” says Richardson.

According to Richardson, after college it is important to find the right job, save prudently, and never give up on your dreams. “It’s surprising we’ve become so successful with such simple advice. Although not always easy, you just have to keep your eye on your vision and persevere. I can look back and say, ‘If it hadn’t been for my company and the good salaries our employees made, where they would be now?’ It feels good to know we made a difference.”

Making a difference continues to be a part of Richardson’s life. She has been a board member or officer of numerous professional and community organizations, including the Greater Detroit Foreign Trade Zone, Lutheran Social Services of Michigan, Women’s Economic Club of Detroit, International Institute of Detroit, Leadership Detroit, and the National Association of Women Business Owners. In 2002, she was named to the Crain’s Detroit “Most Influential Women” list.

Governor Jennifer Granholm appointed her to the Michigan Tech Board of Control in 2005. In July 2010, she took over the leadership of the Board.

“It was a real honor to be appointed to the Board of Control, and serving on it is a wonderful experience,” says Richardson. “The board is populated by extraordinarily intelligent and savvy people. They are all so competent in their areas and have such a deep love for the University and commitment to its interests.”

Richardson is also enthusiastic about the new MBA programs, especially the Tech MBA Online. “Who among our alums would not want an MBA from Tech? And if you can do it online around your schedule, it’s a real draw. It’s great knowing you can take the program at a set cost that you can budget for. And the quality—well, that just can’t be beat!”

Richardson is positive about the current goals for Tech. “Having a University-wide strategic plan is key. And, the School of Business and Economics plays an important part in the accomplishment of a number of University goals. The Board and administration are always focusing on how we can provide a world view for the students. Not only how to invent the technology but how to apply it to bettering mankind. The business school provides the critical link between technology and real-world applications.”