“The Bit Player,” a documentary about Claude Shannon, Is Sunday, November 3 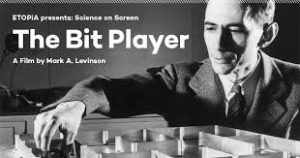 The College of Computing, the Institute of Computing and Cybersystems, and the Department of Electrical and Computer Engineering are sponsors of a showing of the film, “The Bit Player,” during this week’s 41 North Film Festival at the Rozsa Center. The showing is this Sunday, November 3, at 3:30 pm. There is no charge to attend, but film-goers are encouraged to secure tickets online and at the Rozsa Center box office. (mtu.edu/rozsa/ticket/calendar/)
“The Bit Player” is a documentary about  Claude Shannon, the father of information theory and a hero to many in electrical engineering, computer engineering, and computer science. Claude Shannon was born in Gaylord, Michigan, on April 30, 1916. He attended University of Michigan, double majoring in mathematics and electrical engineering. His MIT master’s thesis was titled, “A Symbolic Analysis of Relay and Switching Circuits,” which related electric circuits and their on/off character to Boolean Algebra, the “Mathematics of Logical Thought,” laying the foundation for machines to make decisions — “to think.”
This was the first documentary film funded by the IEEE Foundation, and it was done in conjunction with the IEEE Information Theory Society (ITS). The ITS is the only IEEE society whose “basis” has a definitive starting date – the 1948 publication of Shannon’s A Mathematical Theory of Communication <http://math.harvard.edu/~ctm/home/text/others/shannon/entropy/entropy.pdf>
More information about this film can be found at http://41northfilmfest.mtu.edu/2019/the-bit-player/.

A description from the film’s official website (https://thebitplayer.com): “In a blockbuster paper in 1948, Claude Shannon introduced the notion of a “bit” and laid the foundation for the information age. His ideas ripple through nearly every aspect of modern life, influencing such diverse fields as communication, computing, cryptography, neuroscience, artificial intelligence, cosmology, linguistics, and genetics. But when interviewed in the 1980s, Shannon was more interested in showing off the gadgets he’d constructed — juggling robots, a Rubik’s Cube solving machine, a wearable computer to win at roulette, a unicycle without pedals, a flame-throwing trumpet — than rehashing the past. Mixing contemporary interviews, archival film, animation and dialogue drawn from interviews conducted with Shannon himself, The Bit Player tells the story of an overlooked genius who revolutionized the world, but never lost his childlike curiosity.”