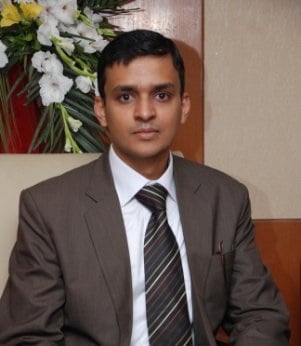 The College of Computing’s Department of Applied Computing invites the campus community to a lecture by MERET faculty candidate Muhammad Fahad on Thursday, April 9, 2020, at 3:30 p.m., via an online Zoom meeting. His talk is titled, “Motion Planning and Control of Autonomous Mobile using Model Free Method.”

Link to the Zoom meeting here.

Dr. Fahad currently works as a robotics engineer at National Oil Well Varco. He received his M.S. and Ph.D. in electrical engineering from Stevens Institute of Technology, Hoboken, NJ, and his B.S in EE at University of Engineering and Technology, Lahore, Pakistan.

Lecture Abstract. Robots are playing an increasingly important part in our daily lives. This increasing involvement of robots in our everyday lives has highlighted the importance of human-robot interaction, specifically, robot navigation of environments occupied by humans, such as offices, malls and airports. Navigation in complex environments is an important research topic in robotics.

The human motion model consists of several complex behaviors that are difficult to capture using analytical models. Existing analytical models, such as the social force model, although commonly used, are unable to generate realistic human motion and do not fully capture behaviors exhibited by humans. These models are also dependent on various parameters that are required to be identified and customized for each new simulation environment.

Artificial intelligence has received booming research interest in recent years. Solving problems that are easy for people to perform but difficult to describe formally is one of the main challenges for artificial intelligence. The human navigation problem falls directly in this category, where it is hard to define a universal set of rules to navigate in an environment with other humans and static obstacles.

Using a database of real-world human trajectories–collected over a period of 90 days inside a mall–we have developed a deep inverse reinforcement learning approach that learns the reward function capturing human motion behaviors. Further, this dataset was visualized in a robot simulator to generate 3D sensor measurement using a simulated LIDAR sensor onboard the robot. A generative adversarial imitation learning based method is developed to learn the human navigation policy using these human trajectories as expert demonstration. The learned navigation policy is shown to be able to replicate human trajectories both quantitatively, for similarity in traversed trajectories, and qualitatively, in the ability to capture complex human navigation behaviors. These navigation behaviors include leader follower behavior, collision avoidance behavior, and group behavior.