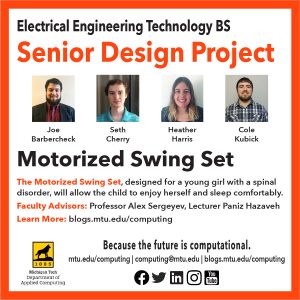 Sergeyev and Applied Computing Lecturer Paniz Hazaveh are advisors to the team.

The story begins with a mother’s wish to help her child get a good night’s sleep. Her three-year-old daughter has a spinal disorder that leaves the child unable to walk, sit up, or lie down comfortably, especially for long periods of time. Children or adults with this type of disability find it very difficult to fall asleep, and the motion of a swing helps bring restful sleep. Mom was getting tired, too.

The mother had reached out to a community college in her area, asking faculty there if their students might be interested in designing and producing a motorized swing set that would allow her daughter to enjoy herself and sleep comfortably without being limited by her parents’ stamina. Unfortunately, the community college was unable to take on the project, and that may have been the end of the story

But when Sergeyev saw the ASEE article, he said to himself, “We have to help!”

So, he sent a message to the publication, who put him in touch with the community college. And eventually, Sergeyev talked with the mother of the child, collected the needed data, and discussed her design preferences, such as the direction, amplitude, and frequency of the swing’s arc. The project is funded entirely by University friends and donors.

Four senior-level EET students are working on the project. Sergeyev and Applied Computing Lecturer Paniz Hazaveh are co-advisors to the team. “The students are very excited about the project,” says Sergeyev. “It’s very meaningful to them.”

“The skills that we are teaching in the EET and Mechatronics undergraduate programs makes students able to just jump on these kinds of projects,” Sergeyev says. “It’s great to see that their learning can be applied to a project as complex as this one.”

Specifications for the swing include that it be lightweight, reliable, and portable. The unit is battery-operated with a rechargeable lithium-ion battery. The swing will both rock the child to sleep and serve as a play toy for three to four years, although the actual lifetime of the swing will be much longer.

The students are tackling the project top to bottom, designing the electrical system, control and drive systems, and portions of the mechanical design. Their top priority is making sure the systems and mechanical structure are safe. With the assistance of mechanical engineering graduate student Pratik Korgaonkar, complex structural and stress analysis was successfully completed, confirming the design’s feasibility and structural stability.

Each student on the team has assigned roles to keep the workload balanced. Heather Harris manages the project, writes reports, and keeps everyone organized and on deadline. Joe Barbercheck leads the mechanical design and 3D CAD modeling. Seth Cherry works on sourcing parts and assists with CAD design. And Cole Kubick has been tasked with finding a motor within spec and figuring out a way to drive the motor electrically using pulse width modulation, a method of reducing the average power delivered by an electrical signal, by essentially splitting the power into discrete parts.

“The challenge is to create a swing that is rigid, because she is not capable of pumping a swing on her own, and because the mother does not have the energy to swing her for hours at a time,” explains Heather Harris. “We have designed it so that the car seat the child normally sits in will be attached to the swing, and a handheld controller will determine the height and speed of the swing.”

The motorized swing is also designed for ease of disassembly so that it can be moved from one location to another. Seth Cherry says that initially the frame was designed to be collapsible, but the team moved away from that to a more rigid, structurally sound design, one that can be easily disassembled with the removal of a few key parts.

The Senior Design team is working to build their first prototype by late February or early March. They would like to deliver the finished swing to the mother and child as soon as possible.

Sergeyev says that a scholarly paper will be published with the results of the project. “It’s not a rare disease, so the design could be replicated for other children and perhaps used in playgrounds.”