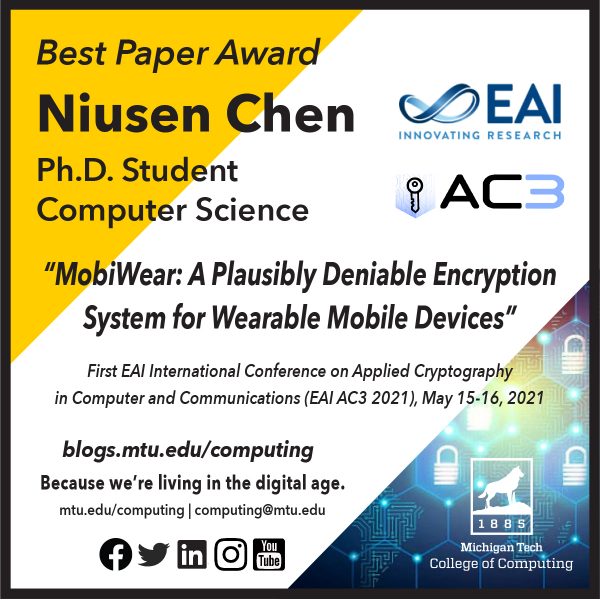 A paper authored by a PhD student Niusen Chen (Computer Science), received the Best Paper Award at The First EAI International Conference on Applied Cryptography in Computer and Communications (EAI AC3 2021), which took place virtually May 15-16, 2021.

The paper discusses the design of MobiWear, the first PDE system specifically for wearable mobile devices.

Niusen Chen is a third-year PhD student in the Michigan Tech Department of Computer Science. He received his M.S. from University of Florida, and his B.E. from Harbin Institute of Technology at Weihai. His research interests include securely deleting data in flash devices and implementing Plausibly Deniable Encryption (PDE) to fare against coercive attack in flash devices.

Twelve papers were accepted to the main EAI AC3 2021 conference, with six accepted for the IOTS workshop, including Niusen Chen’s submission. 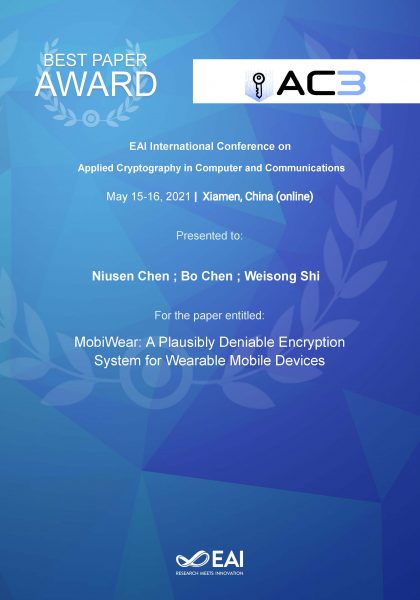 Mobile computing devices are widely used in our daily life. With their increased use, a large amount of sensitive data are collected, stored, and managed in the mobile devices. To protect sensitive data, encryption is often used, but traditional encryption is vulnerable to coercive attacks in which the device owner is coerced by the adversary to disclose the decryption key. To defend against the coercive attacks, Plausibly Deniable Encryption (PDE) has been designed which can allow the victim user to deny the existence of hidden sensitive data. The PDE systems have been explored broadly for smartphones. However, the PDE systems which are suitable for wearable mobile devices are still missing in the literature.

In this work, we design MobiWear, the first PDE system specifically for wearable mobile devices. To accommodate the hardware nature of wearable devices, MobiWear: 1) uses image steganography to achieve PDE, which suits the resource-limited wearable devices; and 2) relies on various sensors equipped with the wearable devices to input passwords, rather than requiring users to enter them via a keyboard or a touchscreen. Security analysis and experimental evaluation using a real-world prototype (ported to an LG G smartwatch) show that MobiWear can ensure deniability with a small computational overhead as well as a small decrease of image quality.

Dr. Bo Chen is an assistant professor in the Department of Computer Science. He served as a member of the steering committee for the EAI AC3 2021 conference.

Dr. Chen directs the Secure and Privacy (SnP) lab at Michigan Tech. Established in early 2018, the mission of SnP lab is to promote research and education of cybersecurity.