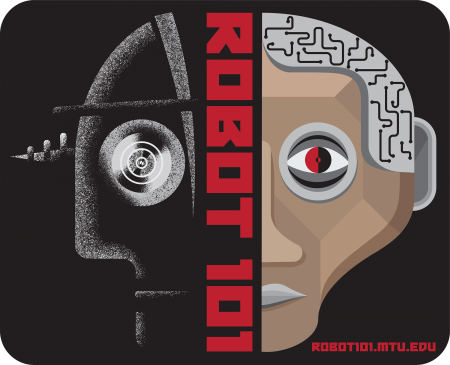 The word robot has been part of the human imagination for 101 years. Michigan Tech is celebrating this anniversary with a series of events called ROBOT101. Throughout the fall semester, there will be opportunities to learn about how faculty and student researchers at Tech are expanding the capabilities of robots, how people have used the idea of “robot” to explore what it means to be human and how robots will change our world. ROBOT101 activities include the following

View the ROBOT101 website for the most up-to-date schedule of events.

Creating a Comic Adaptation of R.U.R.

In-person and via Zoom. Register for the ZOOM webinar.

“When his young daughter’s beloved companion — an android named Yang — malfunctions, Jake (Colin Farrell) searches for a way to repair him. In the process, Jake discovers the life that has been passing in front of him, reconnecting with his wife (Jodie Turner-Smith) and daughter across a distance he didn’t know was there.” [A24 Films]

Robots, Compassion, Love, and Human Resilience in the Technological Hyper-Age

Invited talk: Alexander Weinstein (Siena Heights University): Author Alexander Weinstein will discuss how speculative fiction can help us make sense of our dystopian realities, the dangerous allure of robots and AI, and the ways that he uses real life experiences to inform the futuristic landscapes of his fiction.

Invited talk: Heather Love (University of Waterloo): Professor Heather A. Love traces a lineage from the robot rebellion in Karel Čapek’s cautionary 1921 play R.U.R. to the cybernetic machines developed by the likes of Norbert Wiener during WWII; and she explores the enduring legacy of this imagined narrative within contemporary media and tech culture.

R.U.R. imagines a world in which synthetic humanoid beings perform virtually all work previously done by humans. This change has a profound effect on the human race (the birth rate plunges as people struggle with a lack of purpose), and the robots themselves begin to perceive their own worth and rights as sentient beings. Eventually they lash out against their human oppressors in a violent rebellion. The play ends with a pair of robots discovering love, suggesting a return of compassion to the world.

Karel Čapek and the Origins of R.U.R.

Americanizing the Robot: Westinghouse Electric and the Rise of a Global Consumer Icon

Between the 1921 premier of Karel Čapek’s R.U.R. (Rossum’s Universal Robots) and the explosion of the robot’s popularity in the 1950s, the idea of the robot underwent a startling transformation. Largely thanks to the advertising efforts of Westinghouse Electric Company, Čapek’s character traded its organic body for one made of metal, lost much of its connotations of class rebellion, and increasingly symbolized the utopian possibilities of consumer capitalism rather than its dangers. Instead of satirizing industrial life, the now-tamed robot became, in post-World War II American culture, the key to its success. This talk explores how that happened, how American corporations, the press, and science fiction writers transformed the robot from a creature of nightmares into a tool of consumerist dreams.

Michigan Tech faculty in literature, creative writing, and film studies discuss the stories we tell time and again about robots. Why do we tell these stories? In what ways do they inform and possibly limit our understanding of humans and technology? Are there other robot stories we should be telling?

Robots are radically redefining our conception of the workplace and the nature of work. Three new Michigan Tech faculty members discuss their research on robots at work—work with humans, work with other robots— in a variety of settings including healthcare and manufacturing. What are the opportunities, challenges, and risks of robots in the workforce?