“This is a breakthrough since first joining the NCL competition in Fall 2017,” said faculty coach Bo Chen, assistant professor of computer science. “Congratulations to the RedTeam and John Claasen and Alex Larkin!”

Three teams and 21 players from Michigan Tech were involved this season, most of them with the RedTeam@MTU, a student organization which exists to promote a security-driven mindset among the student population, and to provide a community and resource for those wishing to learn more about information security.  The RedTeam is co-advised by Bo Chen and Yu Cai, professor in the College of Computing.

Students from hundreds of U.S. universities participated during the Fall 2019 NCL season, which comprised a week-long Preseason placement game, followed by a weekend Individual Game, and culminating in a weekend Team Game. A total of 689 teams and 4149 players  participated.

In addition, Michigan Tech ranks 11th among the top 100 colleges and universities in the “Team” Cyber Power Rankings, 51st in the Individual Rank, and 23rd in the Participation Rank. The Cyber Power Rankings were created by Cyber Skyline in partnership with the National Cyber League (NCL). The rankings represent the ability of students from these schools to perform real-world cybersecurity tasks on the Cyber Skyline platform, such as identify hackers from forensic data, pentest and audit vulnerable websites, recover from ransomware attacks, and more. Schools are ranked based on their top team performance, their top student’s individual performance, and the aggregate individual performance of their students. View the full ranking list at https://cyberskyline.com/data/power-ranking/fall-2019-national.

Founded in 2011 to provide an ongoing virtual training ground for participants to develop, practice, and validate their cybersecurity skills, the NCL is a defensive and offensive puzzle-based, capture-the-flag style cybersecurity competition. Its virtual training ground helps high school and college students prepare and test themselves against cybersecurity challenges that they will likely face in the workforce. All participants played the games simultaneously during all of the Fall season games.

The NCL challenges are based on the CompTIA Security+™ and EC-Council Certified Ethical Hacker (CEH)™ performance-based exam objectives and include the following content: Open Source Intelligence, Scanning, Enumeration and Exploitation, Password Cracking, Traffic Analysis, Log Analysis, Wireless Security, Cryptography, and Web Application Security. Players of all levels can participate in the NCL games. Through easy, medium and hard challenges, students have multiple opportunities to excel.

Learn more about the NCL at: https://www.nationalcyberleague.org/.

Building Adult Skills in Computing, or BASIC, is a program where anyone in the community who has questions about computers, smart phones, or tablets, can receive individual instruction. The BASIC program tutors, all Michigan Tech students, and faculty mentor Kelly Steelman, associate professor, Cognitive and Learning Sciences, were featured on the TV6 feature UPsiders on November 25, 2019.

The sessions take place every Saturday morning from 10:00 to 11:00 at the Portage Lake District Library, Houghton, when Michigan Tech classes are in session. Up to 15 tutors are available this semester and all community members are welcome. Computer experience is not necessary and an appointment is not required.

“As the digital revolution continues to transform our society, many older adults and other groups are being left behind,” said Charles Wallace, associate professor of computer science. “Using computers, smartphones and other digital devices remains unfamiliar territory for many and it can be a source of great anxiety.”

Wallace explains that through this free tutoring, the BASIC program aims to overcome this anxiety and build the computer skills and digital literacy needed for participants to effectively operate digital devices and technology and safely find the information they need.

The tour concluded with a talk to Michigan Tech students by Karl Heimer of the MEDC regarding information and student opportunities with MEDC-affiliated CyberAuto and CyberTruck competitions.

The Laboratory of Medical Imaging and Informatics is seeking volunteer Research Assistants.

Are you looking for an exciting research experience in applied artificial intelligence and medical imaging/informatics? The MIIL Lab (Laboratory of Medical Imaging and Informatics) is hiring. We’re focused on developing new computer methods and techniques to solve significant healthcare problems and improve clinical practice.

Both undergraduate and graduate students are welcome to apply.  For a more complete job description or to submit application materials, email whzhou@mtu.edu. 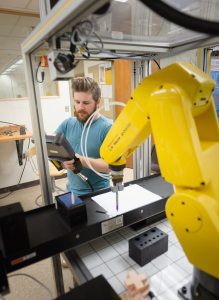 LANSING — Engineering students at Northwestern Michigan College program autonomous rovers to inspect environments underwater and in the air in-real time.The rovers aren’t the only things on the move in a burgeoning robotics industry that experts say is a key to Michigan’s economy.“We’re always going to be trying to move to some new technology – and we just kind of have to be ready for it,” said Jason Slade, the director of technical academics at the Traverse City school.Automation could reshape Michigan’s workforce, experts say.  And the state is a leader in both manufacturing robots and in training employers to use them.

Michigan leads the U.S. with more than 28,000 robots mostly engineered in state, 12% of the nation’s total, according to a 2017 Brookings Institution report.The state’s aging population creates a gap in the skilled labor pool that automation could fill, said Joseph Cvengros, a vice president at FANUC America, a Rochester Hills company that recently opened a 461,000-square-foot robot factory.“The next generation isn’t as large so the way that companies are going to stay competitive is to have a balance of highly technical skilled people and automation,” he said.The change doesn’t eliminate humans from the process, said Rep. Brian Elder, D-Bay City. Elder also chairs the House labor caucus.

“I don’t think we’re ever going to reach a point in which we don’t need human beings to do manufacturing work,” Elder said. “Every once in a while people will say, ‘everything is going to go away,’ and that’s just not true. Will things be different? Undoubtedly.

”The rise in Michigan of industrial robots that are getting smaller and smarter isn’t surprising, said Drew Coleman, the director of foreign direct investment, growth and development for the Michigan Economic Development Corp. (MEDC).

“We’ve had robots and automation since Henry Ford invented the assembly line,” Coleman said. “If you think of anything that you buy, it’s been touched by a robot likely at some point.”

And experts say rather than looking at them as worker replacements, they should be viewed as the source of highly skilled jobs.

“We believe that this is opening up opportunities for Michigan in making us more competitive,” Cvengros said.Automation has applications as diverse as more precise surgeries and self-driving semi-trucks, said Otie McKinley, the MEDC’s media and communications manager.

It requires “a transition of skill sets from the current workforce in addition to the attraction of a new workforce,” McKinley said.

“The corporations and the union understand that well-trained workers will continue to make products that are good enough to demand market share,” Elder said.

Community colleges are stepping up with training programs that work with local employers, said Michael Hansen, the president of the Michigan Community College Association.Schools with FANUC-certified education programs partner with companies looking to hire graduates skilled in programming and using robots in the workplace, Cvengros said.

Michigan Technological University partnered with Bay De Noc Community College in the Upper Peninsula to create a robotics and software development program in 2018. The  hands-on training program offers an easy path for transferring from the community college to the university, said Aleksandr Sergeyev, a Michigan Tech electrical engineering professor.

“I have seen that need in mechatronics for a long, long time,” Sergeyev said. “It doesn’t teach you the depth, it teaches the breadth.”

Sergeyev is a FANUC-certified professor who can train students for jobs in automation. Professors with that certification can also train company professionals, ensuring that they both use the most updated software, Sergeyev said.

Internal surveys showed that 80% of Michigan Tech undergraduates are interested in taking the additional time required to complete a mechatronics degree and 85% of companies want their workers to have it, Sergeyev said.

Slade said a challenge is to prepare technology students for rapid changes.“We have the hope that they’ll be able to use technology right now, but then adapt to new technology that comes online,” Slade said.