There’s a lot more! Check out all the MSE news stories on our Michigan Tech MSE News Blog.

2021 Order of the Engineer inductees

Eight MSE seniors were inducted into the Order of the Engineer, an organization established underscore and celebrate the important role engineering plays in maintaining the safety and welfare of the public, through the ethical and dedicated commitment to the products that they design and produce.

Lauren Bowling was announced as the recipient of the 2021 MSE Academic Achievement Award at the MSE Senior Banquet festivities on April 23rd, 2021. The Achievement award is given to the graduating student with the highest grade point average following the previous fall semester.

Also at the MSE Senior Banquet, Nate Carey was announced as the recipient of the Richard Sharrow Award. The Sharrow award is given to the graduating MSE senior that demonstrating the most improvement in grade point average over the course of their studies at Michigan Tech.

Rising MSE senior Tori Nizzi was selected by Michigan Tech Provost Jacqueline Huntoon as the 2021 MSE Department Scholar. Torri was selected on the basis of her academic achievements to date, her participation in research as an undergraduate, and for her service to the department, college, and university.

Alpha Sigma Mu is the international academic honor organization of the materials discipline. It was established in 1933 at the Michigan College of Mining and Technology; Michigan Tech holds the distinction of being the alpha chapter of this widely recognized and highly respected organization! 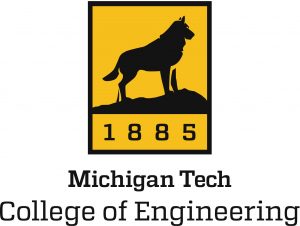 MSE Professor Yun Hang Hu was honored with an impressive set of recognitions during the last year. Professor Hu was elected Fellow of both the American Chemical Society (ACS) and ASM International for his impactful contributions and developments in materials synthesis and catalyst science. In addition, Professor Hu received the Distinguished Service Award from the Energy and Fuels Division of the American Chemical Society. For more information:

Professor Hu is the Charles and Carroll McArthur Endowed MSE Professor of Materials Science and Engineering. He joined MSE and Michigan Tech in 2007, and has made impactful contributions in the area of the science and engineering of materials for energy applications. He received the Michigan Tech Research Award in 2017 and was a co-recipient (an award shared with his graduate student Wei Wei) of the Bhakta Rath Research Award in the same year.

A celebration of Michigan Tech MSE Professor Jiann-Yang (Jim) Hwang’s career of innovative contributions to the field of materials processing was the subject of an honorary symposium sponsored by the Extraction and Processing Division (EPD) at the 2021 TMS Annual Meeting.

Prof. Hwang was honored for his pioneering research on microwave-assisted metallurgy; for engineering and commercialization of environmental technologies to the electroplating industries; his outstanding innovations on mineral processing, and crucial achievements to the power, automobile, steel, and aluminum industries on materials recycling; his great contributions on hydrogen storage materials; significant developments on clean coal technologies; and last but not least, for excellent student mentoring.