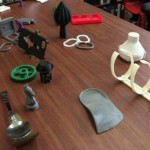 Associate Professor Joshua Pearce’s (MSE/ECE) efforts on 3D printing have been picked up both locally and nationally. His economic analysis was picked up by CNN blogger Heather Kelly in her “What’s Next” column entitled “At Home Printing Could Save Consumers Thousands.” The story also made the UPI wire and Business News Daily. His workshops that teach area teachers how to use 3D printers were covered by WLUC TV6, ABC 5&10 and Second Wave.

Research by MSE students Ben Wittbrodt, Alexandra Glover and John Loreto and Gerald Anzalone (MSE), and Douglas Oppliger (EF), John Irwin (MET) and Joshua Pearce (MSE/ECE) on distributed manufacturing and 3-D printing has made both the popular technical press nationally including Popular Science, Computer World, Tech Crunch, Slash Dot, Kurzweil and Gizmodo and the international news including major newspapers ABC, and El Correo in Spain and the Krone, which is Austria’s largest newspaper with an average daily readership of 2,970,000.

Master’s student Ben Wittbrodt ’13 (MSE) is featured in this ABC News technology feature on 3D printing, “Printing Keychains and Shower Heads: 3-D Printing Goes Beyond the Lab.” Associate Professor Joshua Pearce (ECE/MSE) is quoted in the story, which resulted from his study on the economics of 3D printing.

Joshua Pearce (MSE/ECE) was interviewed for the show Science, Health and Technology for NTN24 International News Channel, which airs in all Latin America, the Caribbean and in Europe through different cable systems and DirectTV in the US. The interview in Spanish covered Michigan Tech’s efforts in distributed production using low-cost open-source 3-D printers.

Read more and watch the video (in Spanish) at NTN24.

The Washington Post published a profile of Michigan Tech alumnus Paul Jablonski ’87, a metallurgist with the US Department of Energy’s National Energy Technology Laboratory. His profile was part of a series on little-known federal workers whose work has a significant impact on society.

That was the task put before Paul Jablonski, a metallurgist in the Process Development Division of the Department of Energy’s (DOE) National Energy Technology Laboratory (NETL) in Albany, Ore.

Jablonski brought to bear his own metallurgical expertise as well as his creativity and innovation to make unusual prototypes of the material. There was some skepticism about the potential of these alloys, since their creation in some cases went against metallurgical theory.

Class of 1953 Reunion Announcement and Challenge!

“Earlier this year, the plan was announced to convert the campus corridor to a mall, beginning to end West to East, the Alumni Way. It’s a splendid idea with a West End Gateway celebrating the history of the college and mining industry of the Keweenaw Peninsula.”

Read more at TechAlum Newsletter, Alumni Around the World, by Bob Carnahan, ’53.

Among the recipients is Hui Wang, PhD candidate in Materials Science and Engineering.

The fellowships recognize outstanding PhD students who are in need of financial support to finish their degrees. The awards are made available through the generosity of alumni and friends of the University.

In addition to the 1st prize of a Type A Machines Series 1 3D printer and the 2nd prize of  Michigan Tech’s MOST version of the RepRap Prusa Mendel open-source 3D printer kit, we are pleased to announce the addition of a 3rd prize, courtesy of MatterHackers. They have contributed a MatterHackers sampler pack.

Joshua Pearce, the professor heading up the contest, says he hopes the contest will get people to design things that can actually be useful for good.

“What we want to do is focus more on the positive uses for 3D printing,” said Pearce. “We use it often times at Michigan Tech to create scientific equipment, but really at this point, 3D printers have come down so far in cost, and they’re so useful now. It’s a tool that can be used for both bad things and good things, and we would like to focus on the good.”

Frank recalled Gilly Boyd, metallurgy legend, from back in the day. “Mr. Boyd” was the proper way to address them, he says.

Materials science and engineering professor Jiann-Yang “Jim” Hwang and 2012 PhD graduate Zhiwei Peng have been chosen to receive Michigan Technological University’s 2013 Bhakta Rath Research Award for their studies on the use of microwaves in steelmaking.

The award, endowed by Michigan Tech alumnus Bhakta Rath and his wife, Shushama, recognizes a doctoral student at Michigan Tech and his/her faculty advisor for “exceptional research of particular value that anticipates the future needs of the nation while supporting advances in emerging technology.” Hwang and Peng, now a research assistant professor, will share a $2,000 prize.

Peng’s solid foundation in math and science and his interdisciplinary approach have been key to the project’s success, said his advisor. “He is not afraid of challenges, and he willingly took courses from other departments that advanced his research,” Hwang said. “By combining knowledge from several disciplines, Zhiwei has developed a new field of research.”

“Prince Chackartnarodom, a 2003 materials science and engineering alumnus, teaches engineering at Kasetsart University, and he is spreading the word about Michigan Tech,” Smith says. “It really helps to have someone there to guide students into our programs. Prince is fluent in English, so he is one of our translators at events over there too.”

Sanchai Kuboon, president of Tech’s Thai Student Association and a graduate student in materials science and engineering, talks with students in Thailand about his experiences on campus.

“I tell them Michigan Tech is a really good and warm place,” he says. “It’s got a lot of international students from other countries, which makes you feel good.”

Alumna Amy J. Clarke, a Houghton native who graduated in 2000 with a BS in Metallurgical and Materials Engineering, has received the Presidential Early Career Award for Scientists and Engineers (PECASE) from President Barack Obama.

This is the highest honor bestowed by the U.S. government on outstanding scientists and engineers who are early in their independent research careers. Clarke is among 13 U.S. Department of Energy affiliated awardees being recognized for their efforts in a variety of fields.

Clarke was nominated by the National Nuclear Security Administration of the Department of Energy for her research on uranium niobium alloy deformation mechanisms using micro-pillar compression testing to determine the influence of orientation on stress-strain response, for using in-situ solidification and proton radiography with potential to finally resolve liquid-solid processing questions relevant to nuclear weapons, and for mentoring future ferrous metallurgists.

“Discoveries in science and technology not only strengthen our economy, they inspire us as a people.” President Obama said.  “The impressive accomplishments of today’s awardees so early in their careers promise even greater advances in the years ahead.”

Read more at the White House Office of the Press Secretary.

Alumnus Bhakta Rath, who earned a master’s degree in metallurgical and materials engineering in 1958, recently spoke before the National Federation of Indian American Associations about women in STEM fields (science, technology, engineering, and mathematics).