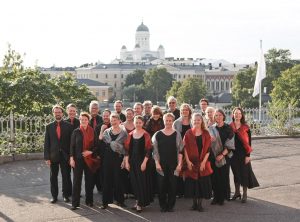 The Rozsa Center for the Performing Arts presents “State of the Union” performed by the Helsinki Chamber Choir, on Sunday, October 2, 7:30 PM.

“State of the Union” (SOTU), by Eugene Birman and Scott Diel, is a 40-minute operatic work for twelve voices, a bold new opera addressing the pressing political and environmental issues of our time.

According to the Rabbit Island Foundation, “The opera condemns no one and everyone, yet its finale doles out redemption to those open to it. SOTU is four characters – the environment, the rich, the middle class, and the poor – meeting and interacting over seven movements. It reflects a belief that many of our problems stem from how we view and treat one another. As a society we too often equate wealth with wisdom, and poverty with personal shortcomings. This work pushes forward the genre of classical music and also advances the medium to underscore a new subject: humanity’s relationship to its natural environment in the context of modern society.”

According to Birman, “SOTU’s relationship to the very beginning of opera is quite strong, in that opera was invented as a genre for communicating revolutionary ideas. But political and conventional limitations on the form were nevertheless too limiting, so it was quickly subsumed into ‘music as entertainment’. SOTU is commentary on that role, for while the piece will be entertaining, I see its purpose as bringing opera back to what it was meant to be… as a Gesamtkunstwerk with a specific purpose, not just one that brings together art forms for the delight of audiences. I think that the genre needs this shake-up because it has, with each new addition, become more and more anachronistic and baroque—ultimately, irrelevant and silly.”

The opera was conceive 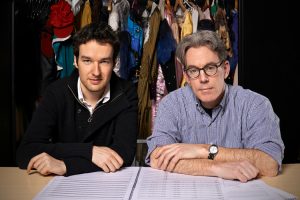 The Helsinki Chamber Choir is the leading vocal group from Finland, and one of the most notable contemporary choirs in all of Europe. Rabbit Island, a 91 acre forested island in Lake Superior three miles east of Michigan’s Keweenaw Peninsula, is held under a conservation easement granted by the Keweenaw Land Trust, and supports programs fostering science, art, preservation and recreation. Rabbit Island is a laboratory for artists to consider the modern relationship between art and the environment, and this is what Birman and Diel have done.

Birman and Diel will present their work, State of the Union (SOTU), in its world premier tour first in Marquette, Michigan, on the campus of Northern Michigan University, then on to the Rozsa Center for the Performing Arts in Houghton, MI then Interlochen, Michigan, and culminating in New York City. SOTU has been brought to life thanks to generous support from the Rabbit Island Foundation, Northern Michigan University’s Northern Nights concert series, DeVos Art Museum, the Finlandia Foundation, the Finnish Cultural Foundation, and the U.P. Beaumier Heritage Center.

We are particularly excited to welcome the Helsinki Chamber Choir to the Upper Peninsula of Michigan where a large percentage of residents can trace their roots back to Finnish immigrants.  In the U.P. we proudly celebrate Finnish language, culture, sauna, surnames and, of course, sisu.

The Helsinki Chamber Choir (Helsingin kamarikuoro) was founded in 1962 as the Finnish Radio Chamber Choir and assumed its current name in 2005. It is currently Finland’s only professional chamber choir. The choir’s Artistic Director from 2005–2007 was Kimmo Hakola. Since 2007 Nils Schweckendiek has been responsible for the group’s artistic planning. While its wide-ranging repertoire includes music from the Renaissance to the present day, the Helsinki Chamber Choir is particularly highly regarded for its work with new music. The choir regularly commissions new works and has given over 50 world premieres in the seasons since 2005, as well as more than 30 Finnish first performances. The choir appears frequently at major Finnish music festivals and collaborates with orchestras and Baroque and contemporary music ensembles. Recent touring has included concerts in Russia, Estonia and Belgium.

The Helsinki Chamber Choir’s concerts are regularly broadcast on radio and television, both nationally and internationally. Particular highlights have been televised performances on the international cultural channel ARTE of Michael Haydn’s Requiem in 2006 and Einojuhani Rautavaara’s Vigilia in 2013.

The Helsinki Chamber Choir’s recording of Magnus Lindberg’s Graffiti (with the Finnish Radio Symphony Orchestra and Sakari Oramo) was nominated for a Grammy in the contemporary music category in 2010. During its days as the Finnish Radio Chamber Choir, the group recorded a number of CDs for the Ondine label, including Rautavaara’s complete works for mixed a cappella choir. The choir’s most recent appearance on CD is in the world premiere recording of Veli-Matti Puumala’s opera Anna Liisa (to be released in May 2015). A number of other recordings will appear in the near future.

Since 2012 the Helsinki Chamber Choir has been a member of Tenso, the association of European professional chamber choirs.

For more information or to purchase tickets, contact Michigan Tech Ticketing Services at the Central Ticket Office (SDC), at 906-487-2073, or go online at rozsa.mtu.edu. 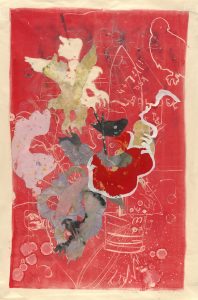 The Rozsa Center and Department of Visual and Performing Arts presents the first Rozsa A-Space Gallery show of the 2016-17 Season: Flats and Rounds, an exhibition of the work of two artists, Kathleen McCloud and Sarah Hewitt.

Hewitt will also create a weaving installation on-site, in the Rozsa Lobby, from October 20 – 26th. A public lecture by Hewitt to discuss her work further will be held in the Rozsa on the evening of Tuesday, October 25.

This exhibition brings together many genres of art; installation, painting, weaving, printmaking, papermaking and sculpture. Combinations, permutations and someplace in between both two-dimensional (flat) and three-dimensional (round) works of art challenge the labels the viewer places on artists and artworks. VPA Assistant Professor and A-Space gallery manager Lisa Gordillo elaborates: “Hewitt and McCloud explore single and multi-dimensional space, gender mythology, and cultural storytelling in this exhibit.”

Kathleen McCloud, a visual artist currently living in Santa Fe New Mexico, works in painting, printmaking, sculpture and installation mediums. McCloud writes, “My paintings and print-based paper constructions expand upon history and the mythologizing that insinuates into the cultural story over time. I reconfigure the characters into a variety of relationships and environments to create globalized narratives that address current events and the replay of history.

The melting pot of characters is reflected in the diverse materials used to make them, which include mixed papers, fabric, plastic and wax. As in fairy tales and myths, these paper characters appear as enchanters- both ephemeral and powerful transformers. Their territory is the borderlands between the known and the unknown, raising questions about home and what it means to be connected a this time.”

Sarah Hewitt is an artist who currently lives in New York but calls northern New Mexico and mid-coast Maine home. Her work has been exhibited throughout the country. Upcoming exhibitions include Kindred Beasts at the Everson Museum, and Flats and Rounds. Hewitt has received awards and residencies from the Skowhegan School of Painting and Sculpture, Vermont Studio Center, Purchase College/SUNY, Quimby Colony and Haystack Mountain School of Crafts. Hewitt describes her work this way: 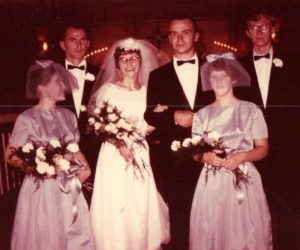 Please join us for Music O Rama, an annual musical variety concert, that will be held this year in honor of a couple that has spent many years participating in the Arts at Michigan Tech.

This concert is sponsored by John and Biruta Lowther, in celebration of their 50th wedding anniversary.

The Lowthers and their family members took part in many of Michigan Tech’s various music ensembles. The celebration will feature performances by conScience, Superior Wind Symphony, and Jazz Lab Band.

According to Jared Anderson, Chair of the Visual and Performing Arts Department and Director of Choral Activities, “Music-O- Rama is a fast-paced music variety show that features many of the instrumental and vocal ensembles at Michigan Tech. Along with performances by the Jazz Lab Band, Superior Wind Symphony, and conScience: Michigan Tech Chamber Singers, this event will feature student led combos and small ensembles as well as compositions from sound students in the Visual and Performing Arts Department. This year the concert will feature music by Louis Armstrong, Gustav Holst, and John Philip Sousa along with selections from the musical theatre stage. This annual concert is quickly becoming an audience favorite. It’s a great way to kick off the music season at the Rozsa Center.”

Tickets are on sale now, $13 for adults, $5 for youth, and no charge for Michigan Tech students with the Experience Tech fee. Tickets are available by phone at (906) 487-2073, online at Rozsa.mtu.edu, in person at the Central Ticketing Office in the Student Development Complex, or at the Calumet Theatre Box Office.