Let’s talk marketing—If you need to blow your nose you use a Kleenex. You use a Q-Tip to clean your ears. If you have a headache you might take Tylenol. What do these examples have in common? Brand recognition. Brand recognition is how familiar a company’s brand is to consumers. This, along with other factors, helps some companies to form an economic moat. Economic moats serve as barriers to competition by creating a competitive advantage that is difficult for other companies to copy or replicate.

You can think about an economic moat by thinking about a castle with a moat around it. The bigger the moat is, the more difficult it is for intruders to attack the castle. Now, imagine that the castle is a company and their profits, the moat is the economic moat, and the intruders are other companies trying to gain a share of the company’s profits. The larger the economic moat, the more difficult it is for other companies to cut into their profits.

Economic moats take on many different forms and can be difficult to quantify (measure).

There are five types of economic moats: cost-advantage moats, intangible-assets moats, high-switching costs moats, size-advantage moats, and soft moats. Cost-advantage moats are when companies have a cost advantage and can squeeze out other competitors who try to enter their market. Intangible-asset moats are created when companies have some type of non-physical barriers that prevent other companies from competing; examples include patents, trademarks, and brand recognition. High-switching costs are just as they sound—it is expensive to switch from one company to another. Consider the swap from an Apple to an Android phone. Not only does the user need to pay for a new phone to make the switch, but they may also have other technology, such as a Mac or iPad, but that would also need to be adapted (either by purchasing new software or a different device) to achieve the same level of integration that iOS products offer. Size-advantage moats come from economies of scale, the idea that larger companies are able to do things better, faster, and cheaper (think $1 McChickens). Finally, soft moats are economic moats that are difficult to identify and describe. They could be caused by the unique culture of an organization or some other advantage a company has over competitors.

Investors should think about economic moats and consider them in their investment decisions. Companies with larger economic moats are more likely to protect their profits and therefore, your investment. Economic moats also allow companies to charge higher prices for their goods and services. For example, Kleenex brand tissues are more expensive than a dollar-store brand.

Can you name some companies you are familiar with that have economic moats?

In this week’s video, Jun Min, professor of marketing in the Michigan Tech College of Business, illustrates what economic moats are and why they are important in business and in influencing the stock market.

Welcome to week four of the Husky Investment Tournament! Continuing on with our analysis of the financial statements, we have moved on to the statement of cash flows, which shows us the cash inflows and outflows that go on within a company over the course of the year. You may have heard the statement that “cash is king” before. A company with strong cash flows will be in a better position than one that does not.

When is the statement of cash flows useful?

We can see that the company has doubled its sales in the year 2020. Sounds good, right?

However, when looking at the statement of cash flows we see that their operating cash flow has decreased in 2020. That should raise red flags. Somehow the company was able to double their sales, but the cash they collected from operations went down. In this example, the company was probably really aggressive in their sales. They must have sold a lot more products on account rather than for cash.

This further illustrates the fact of how all financial statements tie together and that it is important to understand each one when it comes to investing.

In this week’s video, Trevor Salata, current MTU business student and Applied Portfolio Management Program alumnus, explains the cash flow statement and how investors can use it to gauge investment decisions. 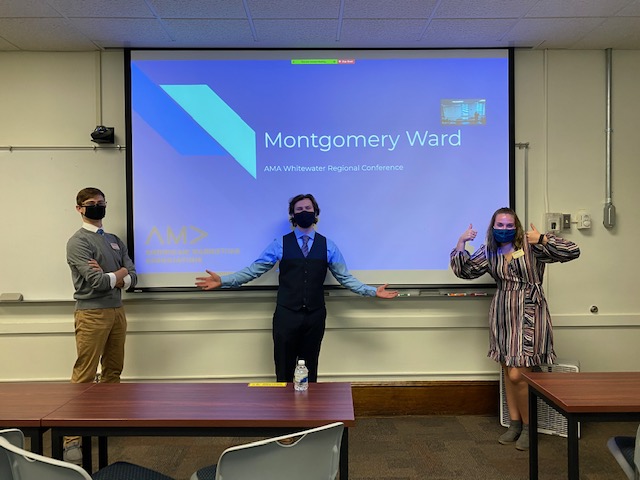 The students were selected as top-10 finalists at the online conference where more than 800 students from 64 universities participated. They went on to place third on October 9, winning a cash award of $250.

In addition to this achievement, Michigan Tech was represented in the AcuRite Digital Marketing Strategy Competition and Gartner Sales Competition, where managers from the sponsoring companies served as judges.

Although COVID-19 disrupted the learning environment, Associate Professor of Marketing, Jun Min, who advises the marketing organization on campus, states, “I am continually impressed with our students’ willingness to try something new.”

Welcome to week three of the Husky Investment Tournament! The standings are looking tight with only $30,000 separating first from 10th place.

Continuing on with our analysis of the financial statements, we have moved on to the balance sheet. The balance sheet gives a snapshot in time of the company. It gives us information about what the company owns, what they owe, and what the shareholders have provided.

The fundamental formula of accounting comes from the balance sheet:

An asset is something that can provide future economic value. Some typical assets you would find include cash, property, equipment, and inventory. They are all owned by the company and will provide future value. A liability, on the other hand, is something the company will eventually have to pay. Some common liabilities include accounts payable, salaries payable, bonds payable. The company may choose to wait to pay their bills, but eventually, they will have to pay. Lastly, the shareholder’s equity portion shows how much of the company has been funded by the shareholders, and the resulting claim they are entitled to.

Isolating this information, what company would you invest in?

In this week’s video, Trevor Salata, current MTU business student and Applied Portfolio Management Program alumnus, explains the balance sheet and how investors can use it to gauge investment decisions.

Welcome to week two of the Husky Investment Tournament!

Accounting is the language of business; it allows companies to accurately convey important financial information to stakeholders. Accountants have many jobs, but among them is preparing the company’s financial statements, which show the financial position of a company.

There are three main financial statements: The income statement, balance sheet, and statement of cash flows. For the next three weeks, we will cover each one in greater detail, and give some investing tips regarding them.

Looking first at the income statement, it shows how much a company made during a period of time—revenues (earnings) minus their expenses.

Some ratios used by investors focus strictly on the income statement. Many start by looking at the gross margin percentage. This percentage is calculated by taking the gross margin and dividing it into the overall revenue. This shows what percentage of every dollar goes towards their gross income. It is important to look at what the company has done historically. Have they gotten better over time? How does it compare to its competitors? Similarly, you can look at their net profit margin. This is found by taking their net income and dividing it into their revenue. It tells us how much of every dollar goes towards their bottom line.

Another important part of the income statement is the earnings per share (EPS). This dollar amount shows us the amount of net earnings that is attributed to one share of stock.

As an example, let’s say XYZ Corporation had a net income of $150,000 and 50,000 shares of common stock outstanding. To calculate the EPS we simply take the $150,000 and divide it by the 50,000 shares. The answer in this example is $3. This company was able to generate $3 of earnings on every share of stock. So what does this do for investors? It is important to look at the historical trend of the company. If XYZ Corp. had an EPS of $0.50 last year, the increase in EPS is a good sign and should be considered when making your investments.

In this week’s video, Sheila Milligan, a senior accounting lecturer, explains what the income statement is and how investors can use it to gauge their investment decisions.