In the Department of Cognitive and Learning Sciences, Kelly Steelman was awarded $4,000 for Portable Eye Tracking System.

We celebrated World Usability Day Thursday. Held all over the globe, it highlights the importance of humans as participants in technology. Sounds like just the job for Tech students, and many projects on campus proved that point.

We started with a driving simulator, staffed by Jason Sterkenburg, a master’s student in applied cognitive sciences and human factors.

“We are looking at a couple of factors,” Sterkenburg said. “Emotional driving, like being in an angry state, and secondary tasks that affect driving performance, like drinking coffee and other things that can distract drivers.”

Steve Landry, a master’s student in psychology, was showing how a massive keyboard worked, too. Stepping on different parts of the floor, with different emphasis, he played and changed musical notes and tones.

Ultimately, Philart Jeon, an assistant professor in cognitive and learning sciences, wants to bring in dancers whose moves will create different notes.

“Instead of dancing to music, they will be creating new music when they move,” Jeon said. 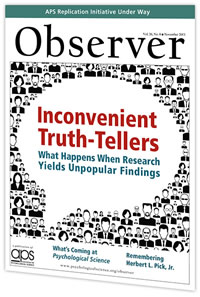 The Association for Psychological Science featured a brief review of Edward Cokely’s recent risk literacy research in their “observations” section.

In a new article, researchers Rocio Garcia-Retamero of the Max Planck Institute for Human Development in Berlin and Edward Cokely of Michigan Technological University discuss the important role that visual aids can play in communicating health-related information. The article is published in the October 2013 issue of Current Directions in Psychological Science. 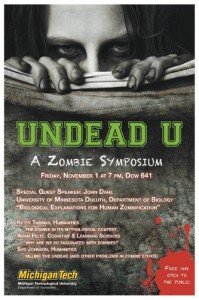 Zombies Are Coming to Michigan Tech!

They grace the covers of magazines. They star in a hit television series. And, they are featured in a popular new game on campus. Although from the world of the undead, zombies have certainly been enjoying their new star status. Now, there’s another venue to celebrate them—“Undead U: A Zombie Symposium,” set for 7-9 p.m., Friday, Nov. 1, on the campus of Michigan Technological University.

Presenter Adam Feltz, of Michigan Tech’s cognitive and learning sciences department, will combine psychology and philosophy in an analysis of why zombies are so appealing.

Adam Feltz from the department of cognitive and learning sciences at Michigan Tech led the symposium with an analysis of why we are so fascinated with zombies. To answer that question, Feltz looked to existing theories first. Those theories include the Stephen King theory, which poses the idea that our fascination with zombies reflects modern consumerism, and the war and atrocity theory, in which we like zombies more during times of hardship. Feltz dismissed those theories by simply tracking zombie movies made during those times and finding either no relationship or an inverse relationship with those trends.

So he went on to survey over 150 people and try to find common indicators that would predict who would like zombies. He found that people who like zombies are more likely to be male, to be young, to be less educated and to be liberal. But, of course, many people outside of those parameters also enjoy zombies.

Michigan Tech staff included in the talk will be Syd Johnson and Ketty Thomas of the Humanities and Adam Feltz of the Cognitive and Learning Sciences. From the University of Minnesota Duluth’s Department of Biology comes the special guest speaker, John Dahl.

Feltz is a member of the Cognitive Science Society, Society of Judgment and Decision Making, and the American Philosophical Association. He published in Consciousness and Cognition, Journal of Bioethical Inquiry and the American Journal of Bioethics. His areas of specialization for research and teaching are philosophy of mind, applied ethics, and psychology of philosophical judgment and intuition.

Kelly Steelman joins the Department of Cognitive and Learning Sciences as assistant professor. She comes to Michigan Tech from Flinders University, where she was an honors thesis co-advisor and postdoctoral researcher.

Her research interests are basic and applied attention, models of attention, human performance in aviation, instructional design and display design. She has been published in Human Factors and Psychonomic Bulletin and Review.

Katrina Ellis is a Fall 2013 recipient of the Outstanding Graduate Student Teaching Award in the Department of Cognitive and Learning Sciences recognizing her teaching performance. The department nominated her for this award. A certificate of recognition for this award will be presented at the Graduate Research Colloquium Banquet that is held in the spring.

Ellis is a PhD student in Applied Cognitive Science and Human Factors. Her advisor is Edward Cokely.

Feltz and Cokely on Philosophical Disagreement

Jeon and Students Present at HFES2013