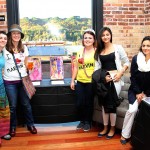 The Marvin Party Reached Its Goal

by Jennifer Donovan, director of news and media relations

Marvin Rene Huezo Mendoza will be able to pay for his final year of university in San Salvador and graduate in 2015.

Hans Lechner and Emily Gochis, graduate students who organized the annual Marvin Party to raise money to put Marvin through university, have announced that the Marvin Party this year met and exceeded its goal. Anything that remains after Mendoza’s bills are paid will go to help other students sponsored by Project Salvador.

The party was last Friday at the Continental Fire Company, which donated the venue.

“We couldn’t have done it without all of you who came out to the party, or made donations to the cause,” said Lechner. “Thank you so much. We are grateful to you all.”

Lechner and his wife, Gochis, were in El Salvador where Lechner was serving in a Peace Corps Master’s International program when they met Marvin, a 17-year-old who had been crippled by polio as a child. When they returned to the US, determined to help him, they organized the first Marvin Party in 2010. It has become an annual event.

The fifth annual Marvin Party was scheduled for 5 p.m. to midnight on Friday, Oct. 10, at the Continental Fire Company. Proceeds from the party help Michigan Tech graduate students Hans Lechner and Emily Gochis put a disabled Salvadoran boy through college.

Lechner and his wife, Gochis, were in El Salvador where Lechner was serving in a Peace Corps Master’s International program when they met Marvin Rene Huezo Mendoza, a 17-year-old who had been crippled by polio as a child. They were impressed with Marvin’s artistic abilities, his intellect and his knowledge of music. They soon became close friends.

When they returned to the US in 2009, they couldn’t stop thinking about Marvin. “Here was this proud, smart person who had taken the initiative to get himself a high school education, and he couldn’t even get around,” says Gochis. “He needs an opportunity to use his intellect.”

They held the first Marvin Party in the fall of 2010, to raise money to send Marvin to college. Now he’s a senior, due to graduate in 2015.

“This year, we need to raise $2,400 for tuition, graduation fees, and his cap and gown,” Lechner says.

The campus and community are welcome at The Marvin Party. Live music will feature Los Bandeleros, Electric Park, Mike Waite, the Street Sweepers and What the Folk?