Q&A with SATAVIA: Climate and Contrails

It’s not rocket science. It’s harder — or at least harder to predict. Clouds are often referred to as the wildcard of climate modeling, and while some basic physics have become much clearer using tools like the cloud chamber at Michigan Technological University, atmospheric science remains a fascinating and complex space.

Shaw, distinguished professor of physics and director of Michigan Tech’s atmospheric sciences doctoral program, studies ice crystal formations in clouds. When Durant worked with him as a graduate geoscience student, the team studied how volcanic ash and frigid water interact in the atmosphere. For Durant, experimenting with specks of dust and drops of supercooled water coalesced into an ongoing interest in the interaction’s effects on airplanes — and the industry’s climate bill. Drawing on his interdisciplinary background, Durant started the company SATAVIA in 2013.

In their Q&A, Shaw (RS) and Durant (AD) explain how rerouting airplanes to minimize contrails can have the biggest impact with the smallest changes. 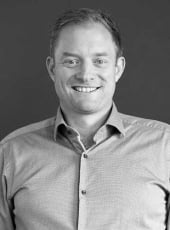 Q: Why focus on contrails to curb climate change impacts?

AD: It’s not just direct engine emissions that matter in terms of aviation’s climate impacts. Non-carbon dioxide sources — like the climate forcing from contrails — make up almost two-thirds of the industry’s impact, which is a surprisingly big number. In fact, it equates to 2% of all human-caused climate change.

RS: Contrails are pretty and localized, so it’s understandable that few people would guess they’re of consequence. And it’s relatively rare flights that make these long-lasting contrails, which are heavily weighted in terms of their climate impact.

AD: Yes, of about 500 flights, only one or two make these kinds of contrails.

AD: We are a data analytics company, building software that uses cutting-edge atmosphere and climate science. We use a commercial cloud structure to create a digital twin of the Earth’s atmosphere from surface to space, quantifying many key meteorological parameters like temperature, humidity, cloud cover and other factors that affect flight operations. We aggregate that information and apply it to different use cases, including contrail formation and other applications such as contaminant exposure and corrosion factors. Predicting contrail formation and persistence in the atmosphere is complex, so it becomes a big data problem – unless you’ve got a high-performance atmospheric digital twin, you won’t be able to crunch through the data properly. Right now, we’re working with a major Middle East airline through a collaboration with Aviation X Lab, a Dubai-based aviation incubator. They want to be proactive about assessing their impact, and they’re helping us validate our models. The next challenge is software integration, so we can help airlines optimize flight paths for contrail prevention while minimizing fuel burn.

Q: How can industry, universities and government groups work together?

RS: It’s important to acknowledge that while Michigan Tech doesn’t have direct collaborations with SATAVIA, it was a former student who started the company and a new graduate, Subin Thomas, starts there soon as a key player on their science team. Academia can play a role by training people in the fundamental science so they can carry on innovation within the private sector. We also work with agencies, like our partners at the National Center for Atmospheric Science (NCAR) and U.S. Department of Energy (DOE). For example, a current graduate student, Elise Rosky, is at this moment at NCAR flying a holographic instrument through clouds to investigate how ice forms and grows. Who knows where that fundamental research will lead, and even how it might tie into the science of contrails? 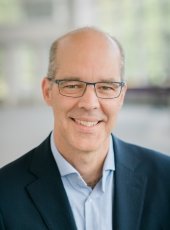 AD: We all want to solve real world problems. There’s a lot more to solving problems than throwing science at it. If it doesn’t cost money or make money, it’s hard to get business to care. As the cost of carbon rises, there is going to be more and more incentive for airlines to fly smarter and greener. With our model, we not only assess a flight plan and help make changes that actually lower aviation’s climate impact, but we also estimate what a company can save in associated carbon credits and carbon offsets.

Q: How did your Michigan Tech research help make these kinds of collaborations possible?

AD: This brings me back to doing my PhD on volcanic ash with Bill Rose, who blended a lot of disciplines. I felt like an atmospheric scientist but my degree was geoscience. I moved on to a climate research group next — mostly climate modelers and remote sensing experts — and that experience also brought me closer to policy.

RS: Sometimes, Adam, we jokingly call students like you a gluon [bad physics joke] — “Well, Bill does this and Raymond does that, so we need a go-between.” To Bill’s credit, he was always roving and looking for people who could help him solve the problems he was working on. So, Adam asked in his research: What happens when we put ash in a supercooled droplet? It was a logical next step to ask what happens when an airplane flies into an ash plume.

Q: What inspires you in your work?

AD: I want to take tangible action on climate change — that’s what my mission has become. We’ve been thinking about our vision as a company and it always comes back to solving climate change.

RS: We say all the time that we do basic science to help society. Examples like Adam’s company make that true. In some ways, it’s easier to stay in academia, but moving into the private sector means there is so much more potential for influence. Much of research is curiosity-driven and with a genuine interest in solving fundamental problems, with the hope that eventually the solutions will make a difference. But no one would fund us to solve puzzles every day; we hope that when we train students that our fundamental work will be connected to the private sector and help make the world a better place.

Q: What are challenges that remain ahead?

AD: Raymond, here is what we are always asked: Do we know enough about the science of contrail formation and whether we can predict it?

RS: Well, the basic physics is there. The part that is complicated, which falls under current research, is how persistent will a contrail be — will it be ice or water, and what’s the crystal shape? The good news is that the basics are clear.

AD: I agree that the fundamental science is sound, and that the challenge facing us now is scaling and creating contrail forecasts at flight altitudes so that aviation operators can avoid making them. And policy and regulation — that is what will influence how big organizations deal with this problem.

RS: That’s the surprising part. Thinking from the company spreadsheet point of view, in the right economy, SATAVIA’s approach can actually save money.

AD: Yes, many companies already pay to offset their carbon emissions. Changing flight plans would make a bigger difference and save them more money. What we need to work on most from a technical perspective is software integration, and that’s going to take time and close partnerships with more airlines.

Q: The pandemic changed travel. How has this impacted your work?

AD: Before COVID, much of our work focused on how atmospheric and climatic factors can damage aircraft engines and airframes, and responding to that with smarter condition monitoring and predictive maintenance.

But as the pandemic began and continued, we pivoted to focus more on aviation’s impact on climate. We just happened to be at the right place at the right time with our ice crystals research. People care about green aviation now, to the extent that it will influence their choice of airline, though some consumers will always be driven by the cheapest prices. In the near term, it’s likely to be business travelers who care most about the green credentials of a flight.

RS: Even before the pandemic, I was starting to notice an uptick in the number of colleagues who would say, “I’m not going to go to that meeting because I’m trying really hard to minimize the aviation part of my carbon footprint.” Or saying, “I can’t go on that airline, I’m going to choose this other airline because they’re doing more to solve this problem.” And I do think the pandemic has made more of us aware of what can and can’t be done. The nice thing is that we can have a global aviation industry and mitigate the impact to some extent. As you think about returning to air travel, why not expect more from the airline you’re flying with? Because there are actions they can take. Contrails are something most people would never think about, but SATAVIA’s work shows that it’s possible to do something about their climate impacts.