The presentation will be available via Zoom and a limited number of people will be permitted to attend in person, dependent on university guidelines on the date of the event. If you wish to be considered for in-person attendance, complete this form by today (Oct. 9).

Schulz is a member of the ICC’s Center for Data Sciences.

The MTRF is presented by the Office of the Provost in coordination with the Office of the Vice President for Research. The forum showcases and celebrates the work of Michigan Tech researchers and aims to strengthen discussions in our community. All are welcome, including the general public. 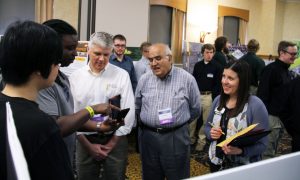 A Michigan Tech alumnus with a long history of philanthropy and support of students will receive the University’s highest honor.

At its meeting, Friday, (Oct. 8), the Michigan Tech Board of Trustees approved awarding the Melvin Calvin Medal of Distinction to Kanwal Rekhi. The native of Punjab, in what was then British India (now Pakistan), earned a master’s in electrical engineering from Michigan Tech in 1969. In the more than half a century since his time on campus, MTU has never been far from Rekhi’s thoughts … and generosity.

After leaving Michigan Tech, Rekhi worked as an engineer and manager before becoming an entrepreneur. In 1982, he co-founded Excelan a company that made Ethernet cards to connect PCs to the fledgling Internet. Excelean became the first Indian-owned company to go public in the U.S.

In the early 90s, he became a venture capitalist investing in more than 50 startups and sitting on the board of directors of more than 20 companies.

In the past few decades, Rekhi has been a tireless supporter and benefactor to Michigan Tech. He developed and funded the Rekhi Innovation Challenge a crowdfunding competition to help promote and support student innovation. He provided major funding for the Silicon Valley Experience, an immersive tour during spring break of San Francisco area companies that includes meetings with entrepreneurs and Michigan Tech alumni, and is a sponsor of the 14 Floors Entrepreneur Alumni Mentoring Sessions.

“Kanwal and his accomplishments epitomize the values we share as an institution. His passion for Michigan Tech is unparalleled and he is most deserving of this award,” said Rick Koubek, President.

While the Melvin Calvin Medal of Distinction is Michigan Tech’s highest honor, it is far from the first recognition the University has given Rekhi. He has received the Distinguished Alumni Award, the Board of Control Silver Medal, an honorary Doctorate in Business and Engineering, and was inducted into the Electrical Engineering Academy.

Additionally, every student who has walked the Michigan Tech campus in the past 15 years has passed the Kanwal and Ann Rekhi Computer Science Hall, dedicated in April of 2005.

The Melvin Calvin Medal of Distinction is bestowed on individuals associated with the University who have exhibited especially distinguished professional and personal accomplishments. It is named for 1931 Michigan Tech alumnus Melvin Calvin, who won the Nobel Prize in Chemistry for unraveling the biochemical secrets of photosynthesis. The series of biochemical reactions Calvin identified is known as the Calvin Cycle.

Associate Professor Zhen Liu, Civil and Environmental Engineering, is the principal investigator on a project that has received a $689,239 research and development contract from the U.S. Department of Transportation, Federal Highway Administration.

Liu is a member of the ICC’s Center for Cyber-Physical Systems.