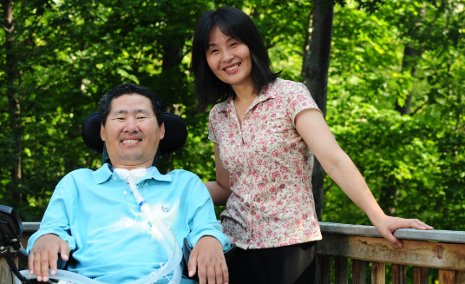 Shuanglin Zhang, who holds the Richard and Elizabeth Henes Professorship in Mathematical Sciences, leads the team of mathematicians that isolated the genes from the many thousands scattered throughout human DNA. He notes that their discovery does not mean an end to ALS, but it could provide scientists with valuable clues as they search for a cure.

It can’t come any too soon. Zhang started showing symptoms of the disease himself four years ago. He now breathes with support from a respirator and works at home with the aid of a research assistant and his wife, Qiuying Sha, an assistant professor and member of his research team.

“I felt very urgent to find the genes for ALS,” he says.

“This is very nice work,” said Xiaofeng Zhu, an associate professor of epidemiology at Case Western Reserve University’s School of Medicine. “It’s very challenging to map genes for complex diseases, and while many statistical methods have been developed, most don’t work well in practice. Zhang’s group has developed a method to detect genes and gene-gene interaction in complex diseases and provided evidence that it works.

“Their findings will need to be confirmed by other researchers, but I think this will be very useful for the investigators who are trying to find genes underlying complex diseases such as ALS,” said Zhu.

According to the ALS Association, only about 10 percent of patients have familial ALS, a directly inherited form of the usually fatal neuromuscular disorder. The remaining 90 percent, including Zhang, are diagnosed with the sporadic form of the disease. While scientists have long suspected that genetics plays a role in sporadic ALS, they have had no evidence to back it up, at least until now.

Everyone has the three genes in question. But in people with sporadic ALS, they differ from those in people who don’t have ALS.

The mathematicians were not surprised when they tracked down the genes’ street address. “Everybody has 23 chromosomes, and the three genes on chromosomes 2, 4, and 10 interact,” explained Sha. “If you have this combination of the three genes, you are at high risk of developing the disease.”

“It’s really exciting, especially because my husband has sporadic ALS,” she adds. “Maybe they can find a cure by blocking the genes.”

According to the ALS Association, approximately 30,000 Americans have ALS, and about 5,600 new cases are diagnosed every year. The disease destroys the nerves in the brain and spinal cord that control voluntary movement, eventually leading to paralysis.

Zhang’s team used a new statistical method to analyze the genetic codes of 547 individuals, 276 with sporadic ALS and 271 without. Their method, a two-locus interaction analysis approach, allows the researchers to identify multiple genes associated with a complex illness.

The data set they analyzed was provided by National Institute of Neurological Disorders and Stroke (NINDS) Human Genetics Resource Center at the Coriell Institute (http://ccr.coriell.org/ninds), a publicly funded “bank” or repository for human cells, DNA samples, clinical data, and other information that aims to accelerate research on the genetics of nervous system disorders.

“Ideally, we should confirm our results in a second data set, but we don’t have one available,” Sha says.

ALS is not the first condition they have tackled. Using data sets provided by University of Cambridge, Zhang, Sha and their colleagues have also identified 11 genes linked to type 2 diabetes, which has reached epidemic proportions in the U.S.

The team hopes to apply their methods to other medical conditions, but has been hampered by the lack of genetic information: most data sets are not freely available to researchers. Zhang found out about the ALS data sets serendipitously, while searching the ALS Association website for information on his condition.

“Unfortunately, we don’t have access to more data sets,” said Sha. “If we did, we could analyze even more diseases.”

Henes and his wife, Elizabeth, are donating $1 million to endow the Richard and Elizabeth Henes Professorship in Mathematical Sciences at Michigan Tech. The couple endowed a chair in mechanical engineering in 2002, held by John W. Sutherland, professor of mechanical engineering and director of Michigan Tech’s Sustainable Futures Institute. Their longstanding support of the University has earned them membership in the Hotchkiss and Hubbell Societies for lifetime giving and the McNair Society for their estate gift commitments.

A native of Menominee, Mich., Henes earned a Bachelor of Science in Mechanical Engineering from Michigan Tech in 1948, followed by a law degree from the University of Michigan. After moving to Arizona, he founded Henes Manufacturing Company, Henes Products and Henes Stamping. He also became a successful real estate investor in Phoenix.

Henes has retired from all but real estate investing. He and his wife divide their time between Paradise Valley and Flagstaff, Ariz.

Henes credits Michigan Tech with stimulating his interest in mechanical engineering and his determination to excel at whatever he did. For many years, Henes has had an active interest in mathematics, and he regards it as the essential building block of all scientific and technological disciplines. He and his wife are committed to helping the University hire and keep top-notch faculty and prepare the next generation to compete in a demanding technological world.

“Liz and I have decided to invest our resources in what will help the world, and Michigan Tech is our choice,” said Henes. “What we are doing through this gift is small, compared to what Michigan Tech can do for the world.”

The Henes professorship is the first named faculty position in the College of Sciences and Arts.

“Endowed faculty positions are a pivotal feature of research universities, for they enhance the productivity of faculty, allowing exciting and promising projects to get started, then move forward, and reach completion more quickly and completely,” said Bruce Seely, dean of sciences and arts at Michigan Tech. “For this reason, we know that Richard and Elizabeth Henes’ hopes for making a difference with their gifts will certainly be realized. I could not be more thrilled that they have chosen to present the first such endowed professorship in the College of Sciences and Arts to mathematical sciences, which has been conducting increasingly recognized research in a number of areas, including statistical genetics.”

The new professorship will be awarded to Shuanglin Zhang, a professor of mathematical sciences widely known for his research in statistical genetics. He won Michigan Tech’s 2008 Research Award for research into the genes associated with inherited diseases such as type II diabetes and amyotrophic lateral sclerosis.

“It is an honor to be the first Henes Professor,” said Zhang “I would like to thank Mr. Henes for his contribution. I will use the funding to support graduate students and post-docs. Mr. Henes’s contribution will certainly strengthen my research and will help the development of the department as well.”

Mark Gockenbach, chair of mathematical sciences at Michigan Tech, added: “It is gratifying that such a successful engineer and businessman would recognize how central the mathematical sciences are to Michigan Tech. This is also a well-deserved honor for Shuanglin, who has done so much for the department and continues to work at very high level in spite of the physical challenges he faces. And the Henes Professorship will help the department to continue to build a highly productive and innovative faculty.”