“It’s an exciting time for NASA and students across the country,” said Drew Hope, Game Changing Development program manager at NASA’s Langley Research Center in Hampton, Virginia. “Thanks to our partnership with the Office of STEM Engagement, this is the most money NASA has awarded in a student challenge directly connected to Artemis. I look forward to seeing the inventive designs come to life as well as how they can advance our exploration capabilities in permanently shadowed craters on the Moon.”

The selected teams will develop ways to collect data in and around permanently shadowed regions, generate wireless power for future infrastructure, enable autonomous mobility even in the most extreme environments, and more. Such systems could benefit NASA’s Artemis program and be used to study the Moon ahead of a human landing in 2024 or help establish a sustained presence by 2028.

The award values vary and are based on each team’s proposed concept and budget. Among the 2020 BIG Idea Challenge awardees is Michigan Tech.

A small rover to lay lightweight, superconducting cable that tethers to a lander as it traverses craters in permanently shadowed regions. Once in its final destination, the rover acts as a recharging hub and communication relay for other robots working in the area, providing continuous power without requiring direct sunlight.

The grants will be used to develop and test the technologies in simulated environments over the next 10 months, demonstrating their readiness for a potential lunar mission as early as 2023. The teams will present the results of their research and development to a panel of NASA and industry experts at a face-to-face design review in November 2020.

NASA has partnered with different universities to develop technologies that it will use for its upcoming mission to the Moon. The agency confirmed that these new technologies would be used to explore the lunar surface’s dark side.

The other universities involved in the upcoming lunar mission are Massachusetts Institute of Technology, Michigan Technological University, Northeastern University and the University of Virginia. Teams from these universities will help NASA in collecting valuable data from the dark regions of the Moon.

Michigan Tech alumnus Hussein M. Zbib passed away Feb. 10 at his home in Pullman, Washington, apparently as a result of injuries he sustained in a September traffic accident. He was 61 years old.

Zbib earned his bachelor’s, master’s and PhD in mechanical engineering from Michigan Tech. He was a member of the ME-EM External Advisory Board and a ME-EM Academy inductee. He joined the faculty of Washington State University in 1987 as a professor in the School of Mechanical and Materials Engineering. He also served as director of WSU’s School of Mechanical and Materials Engineering for 11 years

William Predebon, chair of Michigan Tech’s Department of Mechanical Engineering-Engineering Mechanics said “Hussein was personally a dear friend and colleague. His death is a loss to all of us and to the engineering community.”

Funeral services will be held at a later date and a full obituary will be available at the website of the Kimball Funeral Home in Pullman.

Greg Odegard (ME-EM/MARC) is the principal investigator on a project that has received a $3,825 research and development grant from the University of Massachusetts-Lowell.

The project is titled, “Multiscale Modeling of Advanced Fiber-Reinforced Thermoset Composites During Curing.”

This is a potential two-year project totaling $6,885.

Bo Chen (MEEM/AIM) is the principal investigator on a project that has received a $121,704 research and development contract with UChicago Argonne, LLC. The project is titled “FY2020 Interoperability and Grid Integration Support.”

This is a potential two year project.

The Indian Student Association at Michigan Tech announces that Divya Pandya from ME-EM and Lavanya Rajesh Kumar from CLS have been selected as student campus leads for the first India Student Hub Campus Lead Program of the India Student Hub.

The selection process was competitive and was comprised of a written application followed by several rounds of interviews. The India Student Hub Campus Lead initiative is a collaborative pilot program with the Embassy of India education team and Indian students studying in the U.S. to help shape the future of the planet and co-create #NewIndia.

The India Student Hub is an official initiative of the Embassy of India to connect with, support, and identify opportunities for the 200,000 Indian Students in the United States, the Indian diaspora, and interested U.S. persons or other international students in U.S. institutions. Bios of the student campus leads can be found online.

The student campus leads at Michigan Tech are working with the Indian Students’ Association for their upcoming pilot project/s. Their goal is to build bridges between countries and communities through service-related activities.

By the Indian Student Association.

The Michigan Tech Society of Automotive Engineers (SAE) Collegiate Branch has been selected as the Class 2 recipient of the 2019 SAE Honeywell Outstanding Collegiate Chapter Award.

The group advisor is Jason Blough. Department Chair Bill Predebon notes that the recognition is significant, as most universities have an SAE chapter. He wishes to extend his congratulations to the students and their advisor for a well deserved recognition.

At an awards program Wednesday, January 8, 2020, in the Memorial Union Ballroom, staff members were honored with the Staff Council Making a Difference Awards.

Among the award recipients is Research Engineer Scientist I Rachel Store. She was nominated for the Rookie Award.

Her nominator states “In the 15 months that she has worked for the ME-EM Department, Rachel has made a huge difference in all areas of her job and activities that she has influenced. Her knowledge and drive rival that of someone with many more years of experience.”

A letter of support states that Store is “well-liked and respected by her colleagues and is always willing to help others. In the past one-and-a-half years, I have had the privilege of knowing her, she has proven both through her work and her relationships with others that she is a person of honesty and integrity.”

The Rookie Award recognizes a staff member who:

Ezra Bar-Ziv (ME-EM/APSRC) is the principal investigator on a project that has received a $21,047 research and development grant from Michigan State University. The project is entitled, “Chlorine Removal from Plastic Wastes.” This is a three-month project. 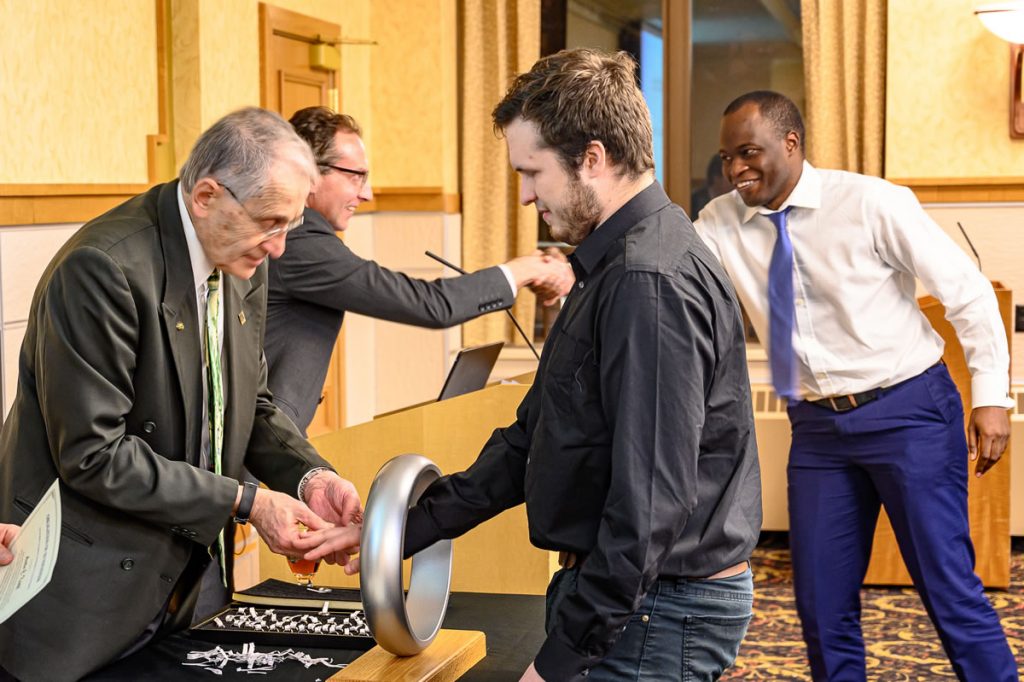 The ME-EM Senior Recognition Banquet and Order of the Engineer Program was held on December 10, 2019.

The speaker was Lawrence W. Staley, entrepreneur. Staley has a BS in mechanical engineering from Michigan Tech and an Executive MBE from the University of Toledo.

I have been honored to observe Dillon Babcock evolve into an outstanding engineer. Dillon has intentionally applied concepts from nearly every engineering course to his Formula SAE projects. He developed habits to systematic to approach engineering problems. Dillon always demonstrates a positive, “can-do” attitude. He eagerly seeks help when he needs it. Dillon is always willing to anything to help the team and his teammates.

SCD team 52 was assigned the ‘Thompson Surgical—Surgical Instrument Life Cycle Test System’ as the Senior Capstone Design project. In addition to the overall team success on this project, Nick stands out on his excellent team management, customer communication as well as project planning skills. He regularly applied himself on behalf of the team in these areas, the team also responding by delivering their best work towards satisfying the customer. In view of his performance, I recommend Nick Jensen for the Outstanding Student Performance Awards.

Capstone Team 60 was engaged to develop a new standard process for making tensile test samples from bulk composite sheet.  Much of the challenge centered on understanding why tensile property results from previous sample manufacturing methods showed so much variation.  Identifying the numerous independent variables, designing the experiment and executing the subsequent data processing, was a major undertaking. This student demonstrated a highly competent understanding and ability to apply experimental design and data acquisition techniques.  He was fully committed, and supported by a strong set of teammates, delivered in an outstanding and much needed way. For this, Andrew Boerman is nominated for an Outstanding Student Performance Award.

“I hope you will all look back on this day and all of the people who helped you along the way,” MTU President Richard Koubek said in his welcome address. Koubek also introduced the student speaker, Victoria Quinde Sorrano.

Sorrano graduated with a bachelor’s in Mechanical Engineering. Originally from Ecuador, Sorrano was also a language coach and a tennis player while at MTU.

Read more at the Mining Gazette, by Jon Jaehnig.

“Michigan Tech has been a really special. It’s unique. I don’t think there’s a place like this anywhere else so I’m really happy I made the decision of coming here,” said Student Commencement Speaker and Mechanical Engineering Major, Victoria Quinde.

Read more and watch the video at TV6 FOX UP, by Remi Murrey.