Reduce, recycle…. but reuse is the most fun!

Just in time for the holidays, the perfect gift for that Star Wars nerd in your life.

Expect more substantial posts from me shortly… it has been a busy couple of weeks!

The D80 conference is coming up, here on the campus of Michigan Tech on Saturday, October 8th! It is a venue for sharing about sustainable development in developing countries with many different speakers and activities. Registration is free and open to everyone. Find out more at http://www.mtu.edu/d80/conference/

Linked in, Left out, Uplifted, Downloaded

Dr. Mary Louise Pratt of New York University will give a lecture entitled “Linked in, Left Out, Uplifted, Downloaded: The Ecology of Language in a Globalized World,” on September 29th at 7pm in the main lecture hall next to the Atrium of the Forestry building.

This lecture is open to the public. 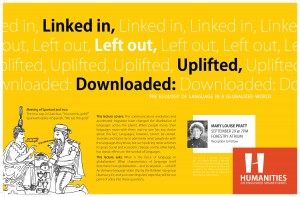 When we lose words about nature

Dr. Herb Broda’s talk last night (Plugged In But Tuned Out) did not disappoint. It was entertaining and informative, if by “entertaining” you include the feeling of being absolutely horrified by choice. (That’s why we go to horror movies after all, yes?)

Among the tidbits that made my hair stand on end, I have to say that his slide listing the recent revisions to the Oxford Junior Dictionary really stunned me.

Gone are words like “acorn”, “otter”, and “dandelion”. In fact, of the 150 words dropped from the dictionary, most were affiliated with nature.

Added to the new addition were the words “blog”, “MP3 player”, “BlackBerry” and “broadband”.

I know that languages go extinct (we’re in an era of a massive language extinction wave now), words are lost or change their spelling or come to mean entirely new things, while new ones continue to arise. But typically when entire collections of words linked by a common subject are lost (think of the vocabulary we’ve lost as automobiles replaced horse-drawn carriages), it indicates a profound shift in a society with often unknown consequences. Our language is a living description of who we are and what we value, and I would hate to think that we have collectively decided that acorns are less important than blogs (including this one!).

The “Students for Environmental Sustainability” organization have started a new blog, “SustainableMTU“. Go check it out!

Dr. Herb Broda of Ashland University will be giving a presentation, “Plugged in but tuned out: The need to reconnect with nature” at 7pm on September 15th at Michigan Tech (135 Fisher Hall). You can find out more information here: Herb Broda Community Flyer 9-15-11.

What is a neighborhood without neighbors?

A recent article in The Atlantic (online, anyway) highlights a new LEED-Platinum certified neighborhood…. yes, the entire neighborhood…. in Victoria, British Columbia. Dockside Green is a 15-acre brownfield redevelopment just across the river from downtown, powered by an onsite biomass gasification plant and treating its wastewater through a constructed waterway. The pictures certainly make it look like the coolest place to live EVER: 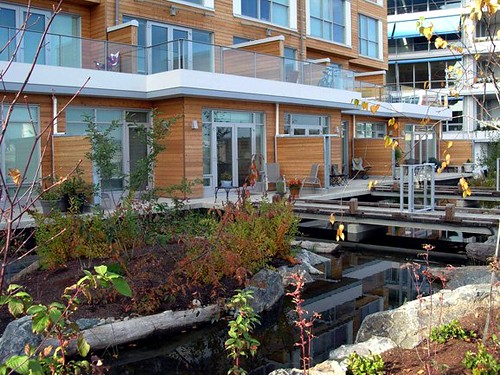 However Kaid Benfield (the author) said it didn’t yet feel like a “neighborhood”, perhaps due to its unfinished and half-empty status. He cites both the lack of “critical mass” and the disconnectedness to surrounding neighborhoods as reasons for the feelings of isolation, and I have no doubt that these are the main contributors. In fact, I would argue that the lack of critical mass is far more to blame than the “work in progress” status of the development. And of course, it isn’t just a matter of not having enough humans occupying the space, but enough people who are committed to the goals of the project. Bad neighbors do not make a neighborhood any more sustainable (or desirable) than no neighbors.

Humans are intensely social creatures; if we are unable (or unwilling) to socialize face-of-face, we find new and clever ways to communicate anyway, from smoke signals to virtual worlds. Regardless of how amazing and lovely our dwellings are, without neighbors willing to be neighborly we simply don’t have a neighborhood. It may be that it will take another decade or so before there are enough people of like minds who will create a community in the Dockside Green neighborhood; it seems to have taken that long in other ecovillages such as Prairie Crossing in Grayslake, IL (begun in the mid-1980’s) or the EcoVillage in Ithaca, NY (begun in the mid-1990’s). However, both of these communities have very explicit expectations for social responsibility of all of its residents, going far beyond the restrictions common to homeowner associations, and both of these communities are quite small relative to the Dockside Green effort: 400 homes in Prairie Crossing and 90 homes (60 completed) in the Ithaca EcoVillage, in contrast to the 2500 residents in 26 buildings expected when Dockside Green is completed. It will be interesting to see if this many residents can coalesce into a sustainable neighborhood!