PBS is hosting a new series of very short (3 minute) films called “The Lexicon of Sustainability“, discussing topics such as the local-vs.-organic debate, food waste, and Community Supported Agriculture (CSA). If you’ve got three spare minutes, head on over and take a look!

Wendell Berry: Writing the Poetry and Economics of Ecological Responsibility

[This is a post from Katie Snyder, a PhD student in Rhetoric and Technical Communication here at Tech. This was an assignment for our Ecological Economics course.]

As far as I can tell, there’s not much conversation between economists and poets of late. This is unfortunate, in a way, because both are so closely attuned to the inconsistencies of human emotion. Economic news reporters, for example, will discuss “nervousness” in the market, or “optimism,” as if “the market” had feelings of its own. Poets, at the same time, are deeply concerned with emotive experience, adhering to schemes of rhythm and sense.

But it’s hard to find someone who can engage intelligibly in economics and poetry at the same time — harder still to find someone who can articulate a meaningful relationship between these two in the context of current ecological crises. Maybe there are more examples than one, but Wendell Berry is the best I can think of at this point.

Berry, now 79, is a poet and farmer, among other things. A graduate of the University of Kentucky, and winner of myriad writing prizes and awards, he’s taught and farmed and served as a local activist for most of his life. His writing is lovely and unexpected. Read, for example, “The Peace of Wild Things.”

Last spring Bill Moyers interviewed Berry as part of an ecologically-themed conference at St. Catharine’s College, located outside Louisville. The interview aired in Oct 2013 on Moyer’s program, and highlights the pragmatic and humble logic of Berry’s perspective.

Berry argues, for example, that it should be little wonder that the industrialized world finds it increasing difficult to keep human beings “employed.” He says that one of the two goals of industrialization was to replace people with machines, and points out that we’ve met this goal quite successfully—though politicians are loathe to make that connection. Berry says its his job, because he has “no power,” to call out this kind of inconsistency.

The suggestion that he has “no power” should be clarified however, because he believes that “the people” have power if they choose to take it, and that ecological damage can only be reversed in local and long-term schemes developed by communities who are devoted to their land. It is out of this commitment to rehabilitation and reclaiming that he advocates for the 50-year farm bill.

The bill proposes to move away from monoculture and return more crop diversity and more people to rural lands. Berry admits this proposal would take patience … and faith … and hope. But he is adamant that we must try. Even in the face of impossible odds he says,

And while these are philosophical and spiritual and ethical questions, Berry points out that they are also very pragmatic economic questions. Toward this end, he is intensely critical of modern capitalism. He argues that its “natural logic” is to take as much as you want, by whatever means you can devise—and this logic is simply unsustainable.

Berry’s love for, and obligation to, nature plays out in his economic perspectives as much as in his poetry.  He says his writing gives an account of “precious things,” most of which are now in danger of falling away. His hope is that we can again begin to see the world in terms of its preciousness—its sacredness—rather than simply in terms of its immediate economic value.

Food in the UP neighborhood

And finally a foodie post from my current haunts…. the UP Food Exchange website is up and running! Make it your first stop for information on local food news, farmers and markets, as well as an online market to increase agricultural connectivity across the three UP regions (Western, Central, and Eastern).

This time it’s news from Cincinnati that one of the oldest community gardens in Over the Rhine would have been bulldozed for housing development. The “Eco-Garden” is a lovely garden that I used to walk by frequently on my way to downtown from Clifton, so it is very good news indeed that it has not only been spared, but incorporated into the city’s redevelopment plans for Over the Rhine.

While Over the Rhine is one of the poorest neighborhoods in Cincinnati, it has deep cultural roots that include food and urban ag. I spent most of my Saturday mornings at the historic Findlay Market, which was open year-round thanks to a major improvement about 8 years ago to enclose the main stalls in a four-seasons building. Before that project, Findlay Market definitely required a bit of stoicism for winter shopping, but it separated the committed from the fair-season shoppers.

Farmers Markets are quickly returning to cities around the country, after decades of lagging interest. It is quite an impressive achievement for Findlay Market to have withstood the test of time. And now it appears, happily, that the Eco-Garden will too.

Grist.org published a segment last week on Chicago’s new urban farmer program, aiming to train up to 100 farmers each year on how to establish an urban neighborhood farm, both from the agricultural as well as the business side.

Many contracting or otherwise struggling urban cities in the US are looking to agriculture as a solution for vacant lots and unhealthy diets, from Pittsburgh to Detroit to Los Angeles. (You know it’s a trend when the New York Times has an entire online section dedicated to it.) Farming (or even gardening) on a vacant lot can be challenging, from polluted soil to poor drainage to pest infestations, not to mention ordinance violations. But as experience with these transformations grow, lessons learned from converting many thousands of acres of brownfields into greenfields could help localize our food system and provide much needed urban employment. It’s also a great way to immerse children in the food system, allowing easier access to gardens (to participate in growing their own food) and a natural way to get to know others in their community.

Personally, I’m glad to see the change of heart in my native city; let’s see if the suburbs follow suit and relax their landscaping ordinances that prohibit gardens in front yards.

“Ken Meter will present a program on Thurs Feb 14 from 6:30-8 in MEEM 112  “The Value of Local Food: How Local Food Systems are Revitalizing Economies and Communities.”   Mr. Meter is an economist and national expert on the economic impact of local food production, and he is the president of the Crossroads Resource Center. His presentation is free and open to the public.

If you are interested in the linked topics of environmental impacts of global food systems, the impoverishment of local producers, and wider issues of healthy diets and enhancing local food security, there’ll be something for you in this presentation.”

Michigan Tech has launched itself into the urban ag movement with an aquaponics set-up in the ninth floor greenhouse in the Dow. Established by Robert Handler (in the Sustainable Futures Institute) and Nancy Auer (Biological Sciences), the farm is producing basil, tomatoes, peppers, eggplants, and more than three dozen tilapia (in the large blue bins with the mesh on top). The water from the fish bins (filled with fish poop) circulates to the planted containers, where the plants use the fish fertilizer to grow. The water trickles through the soil, leaving through the bottom as clean water that is then circulated back into the fish tanks. Given the great success of its inaugural year, I can envision a steady flow of fresh, local veggies and fish appearing in the campus dining halls in the near future. 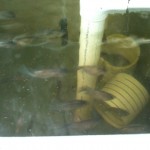 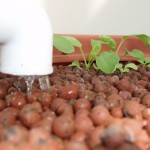 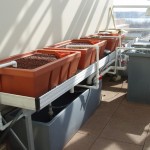 A great new TED talk about using food as a common language to improve local conditions in a small English town:

Pam Warhurst: How we eat our landscapes

May 17 Food – Food is a local and a global issue. The film explores whether it is possible to design a food system that ensures health, accessibility and affordability for everyone? (49 min.)

Discussion facilitator:  Sara Salo, School Food Tour. Meet Sara Salo, Founder & Executive Director of the School Food Bicycle Tour. Join us as we welcome Sara back to Houghton (she’s a Houghton HS graduate) after her epic 6,000-mile solo ride with the goal of empowering students, schools and communities to advocate for equitable access to wholesome food. She earned a M.S. in Public Health from Oregon State University. Sara is fascinated with examining and strategizing how the roles of place, community and individual come together to create and maintain sustainable food systems.  School Food Tour http://schoolfoodtour.org/about/

The Green Film program is partially funded with a grant from:
♦ League of Women Voters of the Copper Country ♦ Friends of the Land of Keweenaw ♦ U.P. Environmental Coalition