As the summer intern in the Michigan Tech Archives I’ve been tasked with a variety of projects, one of which I just finished in time for the Class of 1961’s 50th reunion.  I compiled a list of interesting Michigan Tech facts and notable happenings from that year (full list below) and if there’s one thing I can say about the Class of ’61, it’s that they experienced a lot of ‘firsts’!

By searching through the Keweenawan (Tech’s yearbook), and the Lode (Tech’s student newspaper), as well as a number of other resources, I learned that Winter Carnival of 1961 saw the first official broomball game on campus.  For those unfamiliar with broomball, it’s a hockey-like sport played with brooms, or sticks resembling brooms.  Any student on campus today can testify to the fact that this sport has turned into quite a phenomenon in the last 50 years.  This Winter Carnival also featured a candle-lit dinner before the annual Sno-Ball dance.

It was an exciting time for varsity sports during the 1960-1961 academic year as well.  Michigan Tech started its first varsity wrestling team, with Bob Gunner as the coach.  The hockey team was also pleased to find out that team captain Gerald Fabbro was pictured on that year’s cover of the “Official NCAA Ice Hockey Guide”.  It was the first time a Tech man had appeared on the cover.

As the class of 1961 is admitted into the “Golden M Club”, which honors alumni who have passed the 50-year milestone in their alumni lives, they can also look back and note that 1961 was the year that this prestigious club was formed.  Congratulations to all the new Golden M Club members! 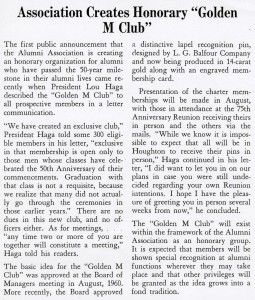 1960 marked the 75th anniversary of what was then known as the Michigan College of Mining and Technology, though it was named the Michigan Mining School when it was founded in 1885.  Even during 1960-1961, it was widely known as “Michigan Tech.”

It was during the spring of 1961 that the Alumni Association created the “Golden M Club” to honor alumni who have passed the 50-year milestone in their alumni lives.  Lou Haga, president of the Alumni Association, noted that there would be no dues and no officers in this exclusive club, but said that “any time two or more of you are together will constitute a meeting.”

The campus yearbook was known as the Keweenawan.

The president of Michigan Tech was Dr. John Robert “Bob” Van Pelt.  Part of our current library complex is named in honor of him.  He was the first alumnus to serve as president here, having received the E.M. and B.S. in 1922.  Van Pelt toured the state regularly, speaking on the topic “Expanding Horizons in Science and Engineering.”

The College’s academic year consisted of three “terms” – fall, winter, and spring.  Classes were also offered in the summer.

Several “neighborhoods” of wooden army houses and Quonset huts still stood on the east end of campus.  This area, known as Woodmar, was erected to house the influx of married men (many with small children) who came to Tech to spend their GI Bill money.

The 1960 academic year was also the year the Young Republicans Club formed on campus. The group supplied the student body with absentee ballots.

The fall of 1960 saw an enrollment record for Michigan Tech, with 3,192 students enrolled.

The College also owned the Dee Stadium, site for the Michigan Tech hockey games. The first artificial ice was installed over the fall of 1953, so the 1960/61 season was only the eighth year on the artificial ice.

John MacInnes was in his fifth year as head hockey coach.  Hockey captain Gerald Fabbro was pictured on the cover of the 1960-1961 “Official NCAA Ice Hockey Guide,” the first time that a tech man ever appeared on the cover.

In 1960 Michigan Tech formed its first varsity wrestling team, with Bob Gunner as the coach.

The Tech basketball team joined the Northern States College Conference in 1958-1959.  In this third year of competition the team ended with a 2-8 conference record – 5-15 overall.

The winter of 1960-1961 saw somewhat lighter than average snowfall.  The Keweenaw only received 174 inches of snow.  Record snowfall at that time was the winter of 1950-1951, with a snowfall of 257 inches.
The theme for Winter Carnival was “75 Years of Progress,” and festivities included skits at Hancock’s Kerredge Theater, an ice show at the Dee Stadium, the annual snow statue competition, and for the first time, a candle-lit dinner before the traditional Sno-Ball dance.  The Independents took first place in the Class A snow statue competition, though Theta Tau came out ahead overall.

Winter Carnival of 1961 also marks the beginning of a Michigan Tech phenomenon that survives to the present day.  This was the first year that broomball was played as part of the festivities.

1961 was also the first year that Winter Carnival featured a jazz concert in the Michigan Union Cafeteria.

The College operated the “MCMT Ski Area” above Ripley, which it had acquired in 1947.  It included four electric tows, three full ski runs, and two ski jumps. Before the current chalet was constructed, skiers used the “Huskie Hut” as a warming shack.

In 1961 Tech won the 10th annual State of Michigan Skiing Championship for the 7th time out of only 8 years of competing.

Some of you may also remember the skating rink that was created for the first time off the east side of Wadsworth Hall on the tennis courts.  Noise had to be kept at a minimum and hockey was not allowed.

The 74th Commencement was held on Sunday, June 17th 1961 at the Dee Stadium.  James Boyd, president of the Copper Range Company, delivered the commencement address.

With many married veterans coming to Tech, the “Tech Wives” club was very popular.  They organized the first nursery school on campus, called the Michigan Tech Cooperative Nursery.  It was located in the barracks behind the Institute of Mineral Research.

In 1960 the Houghton/Hancock Lift Bridge had only been in use for one year.

The School Newspaper, The Lode, brought campus news to students and even included ads for slide rules.

The “Sault Branch” of the Michigan College of Mining and Technology had recently celebrated its 12th anniversary.  The campus offered first-year curricula in metallurgical and mining engineering, and two-year curricula in a variety of other courses.  It later became a separate institution and is now known as Lake Superior State University.

Instead of the type of orientation week we pride ourselves on these days, the incoming freshman in 1960 would have experienced something called “frosh week.”  Can anyone here tell me what that was about, and in particular – what the heck is a “flag pole rush?”

There were numerous student organizations across campus, including fraternities, sororities, and club.  Many of these survive on the modern Tech campus 50 years later, while others are gone to history.

Does anyone here recall the Radio Wadsworth club? Perhaps you can tell us about it?

Paul Hainault, class of ’42, and instructor in Mechanical Shops, was producing cast iron Michigan Tech bookends.  Does anyone here still own a pair?  They were painted gold and silver with a large M with “Engineering and Science” across the center.  He sold them for $5.00 a pair and also offered a solid bronze version which sold for $25.00. 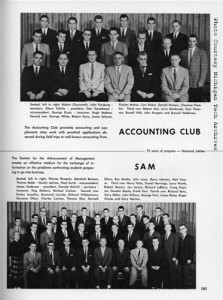