Welcome to Our New Library Assistant 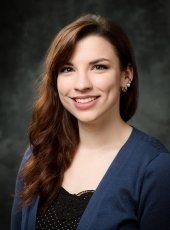 On behalf of the Michigan Technological University Archives and Copper Country Historical Collections, a department of Michigan Tech’s Van Pelt and Opie Library, we hope you will help us welcome the newest member of the team, Kimberly McMullan. Kimberly is our newest Library Assistant, a position which supports the Archives with excellent customer service, patron support, collaboration, and creative problem solving. Below, please take a moment to get to know Kimberly as she introduces herself in her own words.

Now for some fun facts. I am part of the local roller derby team, Keweenaw Roller Derby. Come spring I will be starting my fifth season playing. Other than derby, during the summer I am outdoors as much as possible; in the winter, not so much. I still enjoy snowshoeing and downhill skiing, but would much prefer to hike to a waterfall or sit on a beach in the summer. Another fun fact is that I grew up on a farm with horses, goats, and chickens, and have been around animals of all sorts my whole life. Which means my love of animals started at a very young age.

Please stop in and say hello, and bring your best questions to help me learn! Bonus points if you bring cute animal photos too.

Welcome aboard, Kimberly! We are so happy to have you join the Michigan Tech Archives team!

For more information about the Michigan Tech Archives please call (906) 487-2505 or e-mail copper@mtu.edu. You can find us on Twitter: @mtuarchives

Behind the Scenes: Windows to History

If you have ever visited the Michigan Technological University Archives and Copper Country Historical Collections, you might know that the staff are eager to welcome members of the campus and Copper Country community to the reading room. What you might not know, is that we’re equally excited to share information about the reading room itself and the objects that are visible to patrons every day. One of the most beloved aspects of our reading room are the three stained glass windows that adorn the south wall of the space. Each year we field a variety of questions regarding the windows, but today we’re going to reveal many of those secrets, as well as some that have recently come to light for our staff.

The first stained glass window ever installed in the archives’ reading room was the center window celebrating the class of 1940. The window was a created in tandem with the opening of an expanded facility for the University Archives in the Library in 1982, made possible through donations by the Michigan Tech Class of 1940. The window itself was designed by Walter Boylan-Pett of Mohawk. The new facility was celebrated with an open house to the public on August 6, 1982, debuting the window featuring the Michigan College of Mining and Technology school seal. Its original installation on the third floor of the library allowed for natural illumination by ambient light from the exterior of the building. Today, each window on the garden level is backlit by fluorescent lighting to give the illusion of natural lighting, which has the added benefit of making the reading room appear cheerful and sunny.

To the right of the Class of 1940 window is our stained glass window celebrating the University’s centennial. Dedicated in 1985 to celebrate the school’s 100th birthday since its founding in 1885, the window features a vibrant green, yellow, and orange pallet.

At the far left of the reading room is the “Window to the Copper Country” stained glass window. Designed by Peg McNinch by commission for the Michigan Tech Archives in the summer of 1988, the window was made “to honor the depth of local historical and natural resources materials” and has, by far, the mosting interesting story to tell of the three windows. The unveiling of the window in 1988 included a dedication by State Director of the Bureau of History, Martha M. Bigelow. The window, which stands at 6.5 x 5.5 feet, features a map of the region as its central focal point while border panels depict the local historical and natural resources for the which the window was designed.

The history of the Copper Country is indebted to the native peoples who occupied and made this area their home long before the establishment of modern mining operations. The Chippewa, Ojibway and Ottawa bands have resided in the Upper Peninsula for nearly 4,000 years, leaving a lasting legacy. The Thunderbird, which occupies a place of prominence at the top of the window is meant to represent a mythical bird believed to cause lightning and thunder while honoring the native peoples of the Upper Peninsula.

Several panels depict the natural resources of the Copper Country and incorporate local materials into the artwork. One panel on the middle-left of the window shows a waterfall representing the many natural waterfalls in the area such, as Douglass Houghton Falls, Hungarian Falls and Jacobs Falls. Local specimens of datolite are embedded into this panel. Another panel at the lower left shows the trillium and thimbleberry, well-known natural plants in the area. The thimbleberry in particular is a favorite of locals and makes excellent jam, which can be found throughout the Copper Country. A third panel on the middle-right depicts Estivant Pines, representing the last stand of virgin white pine in Michigan. Named after Edward A. J. Estivant, a pioneer who purchased the site in the 1870’s, this natural wonder is an amazing site that can be visited just south of Copper Harbor.

While the majority of the panels depict the aboveground history of the region, the bottom right panel containing a miner’s candle, hat and pick, is meant to commemorate the vast resources underground and the lasting legacy of the mining heritage of the Copper Country.  A quartz crystal, donated by the A.E. Seaman Mineral Museum, is inlaid on the miner’s candle, which represents the earliest form of illumination used by miners while working in the underground mines.

Prominent buildings are represented among the panels to showcase different aspects of the commercial, entertainment, and recreational history of the area. The top left panel depicts the Keweenaw Mountain Lodge. A fixture within the Copper Country, the Mountain Lodge is one of the major resorts in the area. Built in the 1930s under the Civil Works Administration, the resort is located off of U.S. 41 just outside of Copper Harbor and includes a 9-hole golf course.

Like the Keweenaw Mountain Lodge, the Copper Harbor Lighthouse has long been an important building and site in the Upper Peninsula. Built in 1866, the lighthouse marked an important port of shipping on Lake Superior since water transportation was the sole means of accessing the area and moving people, supplies, and equipment until the age of rail transportation. The top right panel depicts the Copper Harbor Lighthouse and this important era in the history of the Copper Country.

During our research into the Window to the Copper Country, we made a very surprising discovery that we’re excited to share with you today. On the bottom center of the window is a panel depicting the Calumet Theater. Meant to symbolize the important role the theater has played since its opening in 1900 as a place of entertainment and social gatherings into today, the panel plays a subtle, yet significant, dual role of commemoration. In December 1913, following the tragic events of the Italian Hall disaster, which left 73 people dead, including 60 children, the dead were brought to the Calumet Theater, which functioned as a temporary morgue. This relationship between the Italian Hall and the Calumet Theater is solidified in the window, which includes a slice of brick imbedded in the panel from Italian Hall. While likely known by departmental staff at the time, this interesting aspect of the window was rediscovered during our research into the windows.

We hope that you enjoyed this one of a kind behind the scenes view of the Archives’ reading room. If you would like to view the windows in person, please visit us anytime during our regular operating hours, Monday-Friday from 10 a.m. to 5 p.m.!

Welcome To Our New Assistant Archivist

On behalf of the Michigan Technological University Archives and Copper Country Historical Collections, a department of Michigan Tech’s Van Pelt and Opie Library, we hope you will help us welcome the newest member of the team, Emily Riippa. Emily is our newest assistant archivist which is a one year term position to help us with special projects and various public services and outreach initiatives. Below, please take a moment to get to know Emily as she introduces herself in her own words.

My name is Emily Riippa, and I’m delighted to join the staff of the Michigan Technological University Archives and Copper Country Historical Collections as Assistant Archivist for the next year. I am twice a graduate of the University of Michigan, earning degrees in history (bachelor’s, 2014) and archives and records management (master’s, 2016).

You’ve heard the term “dream job,” and that’s exactly what working at the Michigan Tech Archives is for me. While I was born and raised downstate in Grand Rapids, my family’s roots in the area are very deep: my ancestors first arrived in the 1870s, and my parents grew up in Winona and Hancock. Little did they know what they had started when they brought me to visit the Keweenaw at three weeks old! I fell in love with the Copper Country and its remarkable history during annual childhood vacations, which prompted me to write my undergraduate honors thesis on women’s experiences in the region between 1880 and 1930. Last summer, I was an archives technician intern at Keweenaw National Historical Park, which I enjoyed tremendously. I have also worked part-time at the Bentley Historical Library and the Ada Historical Society in the Lower Peninsula for the past several years, learning more about how to keep history alive through our documents and artifacts.

When I’m not at work, you’ll find me engrossed in my own genealogical research, respectfully exploring local cemeteries and historic sites, enjoying a frigid swim in Lake Superior, biking around the Copper Country, or with my nose buried in a good book. I also intend to learn a little Finnish, a language of my heritage, while I’m here.

I’m thrilled to give back to this community I love in my new role and to experience my first Keweenaw winter. Please feel free to come by the archives and say hello. I hope you’ll find what we have to offer as exciting as I do.

Welcome aboard Emily! We are so happy to have you join our team at Michigan Tech!

For more information about the Michigan Tech Archives please call (906) 487-2505 or e-mail copper@mtu.edu. You can find us on Twitter: @mtuarchives