Flashback Friday: The Queens of Winters Past

The past few weeks the Michigan Tech campus has been gearing up for Winter Carnival 2020! The month-long statue contest began in earnest a few weeks ago, with some of the contests like snow volleyball, curling, snow soccer, and ice bowling taking place this past week.

One of the Winter Carnival highlights, the Queens Coronation, takes place on Saturday, February 1 at 7 p.m. in the Rozsa Center. Although not the longest running Winter Carnival tradition — the one night Ice Carnival started in 1922 and the queens did not appear until 1928 — the coronation is one of the most beloved. Bringing together campus and the community, the queens competition has been a fun spectacle almost since the beginning. To celebrate this special event, our Flashback Friday today is a pictorial, looking back at queens and courts of carnivals past!

This is just a quick glimpse into some of the wonderful photographs we have from queens and carnivals gone by. For more great images of past carnivals, you can check out the digitized Winter Carnival Pictorials on the Archives Section of Digital Commons @ Michigan Tech or stop into the archives anytime during our public reading room hours. 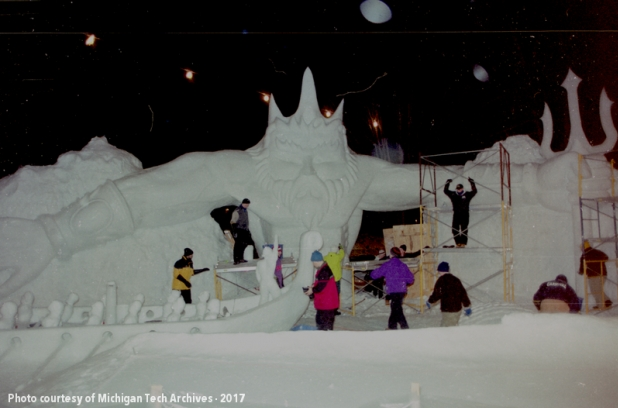 Today’s Flashback Friday celebrates all things Winter Carnival with this image from on this day in 2001. Students work diligently to finalize their statue just as our campus community saw a few nights ago during the 2019 all-nighter.

Winter Carnival is a time-honored tradition here at Michigan Tech, with its beginning taking place back in 1922 when the Student Organization presented a one-night show called the “Ice Carnival.” The show consisted of acts, whimsical displays and performances put on in the traditional circus style, with students in an assortment of costumes. The show was held in the old Amphidrome ice rink, so of course the carnival also included ice skating events, including speed and figure skating contests. The circus theme continued for the next two years and, behold, the tradition was born.

The carnival progressed and made changes as the years went on, with the addition of a Carnival Queen competition and the parade in 1928. There is film footage of the 1928 carnival available on YouTube.

After 1929, there was a lapse of a few years, but in 1934 the Blue Key Fraternity took over the sponsorship of the festivities and put one on that year. The Winter Carnival of ‘34 looked more like the carnival of today, with a two-game hockey series, a parade, skiing, skating, and snowshoe races, and a dance. The focal point of carnival was the parade, with Greek organization, campus societies, and other student organizations developing elaborate floats.

1936 was the debut of the snow statues, which were built by students and student organizations, as well as local school children. As information on the building methods was passed on from year to year, the statues became bigger and more elaborate, with fine detail work and inclusion of ice art.

Decades, and nearly 100 years later, Winter Carnival continues to be a most treasured time of year for Michigan Tech. This year’s theme is “Years of Innovation STEM from this Snowy Situation.” For more information about activities, contest results, and more, please check out the official Winter Carnival website.

The Michigan Tech Archives will be open for Second Saturday during Winter Carnival from 12 p.m. to 5 p.m., Saturday, February 9. Take a break from statue gazing and stop in to see some memorabilia and photographs from Winter Carnivals gone by. For more information, please call the archives at (906) 487-2505 or e-mail copper@mtu.edu.

Winter Carnival, Then and Now

The Michigan Tech Archives will be open for special hours over Winter Carnival Weekend from 10:00 am to 2:00 pm on Saturday, February 7nd.

Ever since Winter Carnival debuted as the Ice Carnival in 1922, Michigan Tech students have found reason to hope for piles of snow and below freezing temperatures. Though traditions other than the iconic snow statues have held fast throughout the decades; the winter Carnival Queen coronation, races, broomball tournaments, the Snow Ball, the beard contest and others have all withstood the test of time.

Scroll through some of these winter carnival memories and see for yourself how constant everyone’s favorite Winter Carnival tradition has remained.

Clicking on an image will take you to the available bibliographic information for that image.

For its semicentennial, the 1965 edition of the annual Michigan Tech Lode Pictorial has been digitized and uploaded to Digital Commons @ Michigan Tech. This pictorial joins a collection of several others hosted on the digital repository, including editions from 1964, 1974 and 1989.

Follow this link to flip-through or download any of the digitized pictorials, and take part in Winter Carnival’s collective history.

To view the full physical collection of Winter Carnival Pictorials feel free to visit the Archives reading room where they are on display and available for viewing.

For more information, call the Michigan Tech Archives at 906-487-2505, email copper@mtu.edu or visit us on the web at http://www.mtu.edu/mtuarchives/.

Ever wonder what is going on in the mines during the winter months?  My curiosity was answered when I ran across photos of some beautiful ice sculptures only Mother Nature could make.  It doesn’t get any better than that.  Take a look and see if you agree.

All of these photos came from the Calumet and Hecla Photograph Collection MS003 Box 12 Negative 119-21.  Prints are available by request and the collection can be viewed here in the Archives reading room.