And Now for Something (not) Completely Different

For the first NHPRC project blog posting after the October fire, I felt it would be appropriate to take a look at a much more unfortunate case.

In 1917, the resident agent of the St. Mary’s Canal Mineral Land Company, F. W. Nichols, was trying to find some early land records.  He wrote to Richard S. Harvey, who was the son of Charles T. Harvey, the land agent for the company’s predecessor. 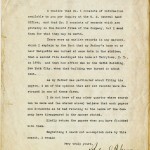 And his fourth office burned down, fell over, and then sank into the swamp.

Look for more about the (surviving) records of the St. Mary’s Canal Mineral Land Company (part of the Copper Range Company Records) in a future blog post.

This project is supported with a grant from the National Historical Publications & Records Commission.