Category: On the Road 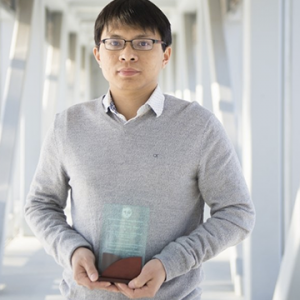 College of Computing Assistant Professor Bo Chen, Computer Science, and his graduate students presented two posters at the 41st IEEE Symposium on Security and Privacy, which took place online May 18 to 21, 2020.

Since 1980, the IEEE Symposium on Security and Privacy has been the premier forum for presenting developments in computer security and electronic privacy, and for bringing together researchers and practitioners in the field.

Chen leads the Security and Privacy (SnP) lab at Michigan Tech. He is a member of Michigan Tech’s Institute of Computing and Cybersystems (ICC) and its Center for Cybersecurity (CyberS).

Chen will serve as general chair for the First EAI International Conference on Applied Cryptography in Computer and Communications (AC3), which will be held in Xiamen, China, in May 2021.

Poster: A Secure Plausibly Deniable System for Mobile Devices against Multi-snapshot Adversaries
Authors: Bo Chen, Niusen Chen
Abstract: Mobile computing devices have been used broadly to store, manage and process critical data. To protect confidentiality of stored data, major mobile operating systems provide full disk encryption, which relies on traditional encryption and requires keeping the decryption keys secret. This however, may not be true as an active attacker may coerce victims for decryption keys. Plausibly deniable encryption (PDE) can defend against such a coercive attacker by disguising the secret keys with decoy keys. Leveraging concept of PDE, various PDE systems have been built for mobile devices. However, a practical PDE system is still missing which can be compatible with mainstream mobile devices and, meanwhile, remains secure when facing a strong multi- snapshot adversary. This work fills this gap by designing the first mobile PDE system against the multi-snapshot adversaries. 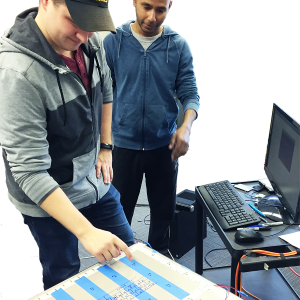 The IEEE World Congress on Computational Intelligence (IEEE WCCI) is the world’s largest technical event in the field of computational intelligence. WCCI 2020 features the flagship conference of the Computational Intelligence Society: The 2020 International Joint Conference on Neural Networks (IJCNN 2020), the 2020 IEEE International Conference on Fuzzy Systems (FUZZ-IEEE 2020), and the 2020 IEEE Congress on Evolutionary Computation (IEEE CEC 2020) under one roof. It encourages cross-fertilisation of ideas among the three big areas and provides a forum for intellectuals from all over the world to discuss and present their research findings on computational intelligence.

A conference paper co-authored by Nathir Rawashdeh (CC/MERET), has been accepted for presentation and publication at the 5th International Conference on Advances in Mechanical Engineering, December 17-19, 2019, in Istanbul, Turkey.

Abstract: The digital image correlation (DIC) method is one of the most widely used non-invasive full-field methods for deformation and strain measurements. It is currently being used in a very wide variety of applications including mechanical engineering, aerospace engineering, structural engineering, manufacturing engineering, material science, non-destructive testing, biomedical and life sciences. There are many factors that affect the DIC measurement accuracy where that includes; the selection of the correlation algorithm and parameters, the camera, the lens, the type and quality of the speckle pattern, the lightening conditions and surrounding environment. Several studies have addressed the different factors influencing the accuracy of DIC measurements and the sources of error. The camera’s focal plane array (FPA) fill factor is one of the parameters for digital cameras, though it is not widely known and usually not reported in specs sheets. The fill factor of an imaging sensor is defined as the ratio of a pixel’s light sensitive area to its total theoretical area. For some types of imaging sensors, the fill factor can theoretically reach 100%. However, for the types of imaging sensors typically used in most digital cameras used in DIC measurements, such as the “interline” charge coupled device CCD and the complementary metal oxide semiconductor (CMOS) imaging sensors, the fill factor is much less than 100%. It is generally believed that the lower fill factor may reduce the accuracy of photogrammetric measurements. But nevertheless, there are no studies addressing the effect of the imaging sensor’s fill factor on DIC measurement accuracy. We report on research aiming to quantify the effect of fill factor on DIC measurements accuracy in terms of displacement error and strain error. We use rigid-body-translation experiments then numerically modify the recorded images to synthesize three different types of images with 1/4 of the original resolution. Each type of the synthesized images has different value of the fill factor; namely 100%, 50% and 25%. By performing DIC analysis with the same parameters on the three different types of synthesized images, the effect of fill factor on measurement accuracy may be realized. Our results show that the FPA’s fill factor can have a significant effect on the accuracy of DIC measurements. This effect is clearly dependent on the type and characteristics of the speckle pattern. The fill factor has a clear effect on measurement error for low contrast speckle patterns and for high contrast speckle patterns (black dots on white background) with small dot size (3 pixels dot diameter). However, when the dot size is large enough (about 7 pixels dot diameter), the fill factor has very minor effect on measurement error. In addition, the results also show that the effect of the fill factor is also dependent on the magnitude of translation between images. For instance, the increase in measurement error resulting from low fill factor can be more significant for subpixel translations than large translations of several pixels.
Request the full paper here.
Continue Reading →

The Social Science History Association is an interdisciplinary organization that publishes a journal, Social Science History, organizes an annual conference, supports graduate student travel to the conference, and awards book prizes. With scholars from history, economics, sociology, demography, anthropology, and other social sciences, the association brings together scholars in thematic networks where they can explore common questions.

Weihua Zhou, assistant professor of health informatics, will present an invited talk and give a poster presentation at the 2019 American Society of Nuclear Cardiology conference (ASNC), September 12-15, in Chicago, IL.

Sonder Onder (SAS), professor of computer science, presented an invited talk at “Yale:80: Pushing the Envelope of Computing for the Future,” held July 1-2, 2019, in Barcelona, Spain. The workshop was organized by Universitat Politècnica de Catalunya in honor of the 80th birthday of Yale Patt, a prominent computer architecture researcher. Onder was one of 23 invitees to give a talk. His lecture was titled, “Program semantics meets architecture: What if we did not have branches?”

Yale Patt is a professor in the Department of Electrical & Computer Engineering at The University of Texas at Austin, where he holds the Ernest Cockrell, Jr. Centennial Chair in Engineering. He also holds the title of University Distinguished Teaching Professor. Patt was elected to the National Academy of Engineering in 2014, among the highest professional distinctions bestowed upon an engineer. View Patt’s faculty webpage at: http://www.ece.utexas.edu/people/faculty/yale-patt.

Keynote Lecture Abstract: ”Form follows function” is a principle associated with 20th-century modernist architecture and industrial design which says that the shape of a building or object should primarily relate to its intended function or purpose”[2]. For best performance in computer architecture, form must follow function as well. What are form and function in computer architecture? Form is easy to understand and interpret in its dictionary meaning; Function is not so clear-cut. In this talk, I will start with a simple problem, an algorithm, and a basic program representation that will be interpreted by the machine, and show that delivering high performance rests on solving only a handful, but fundamentally difficult problems. I will argue that the mere existence of domain specific solutions that general purpose computing cannot match in performance is a testament that the general purpose computing is ”not general enough”. What makes an architecture ”not general enough” is not the architecture itself, but rather the mismatch between the function its form had followed and the actual semantics of programs. To illustrate the point, I will challenge the widely understood interpretation of instruction-level parallelism (ILP) as ”single-thread performance”, and show that this interpretation is too short-sighted. We can efficiently exploit all types of available parallelism, including process-level, thread-level and data level parallelism, all at the instruction-level, and this approach is both feasible and necessary to combat the complexity that is plaguing our profession. I will then discuss why an executable single-assignment program representation [1] may be the ultimate function whose implementations may result in homogeneous general purpose architectures that can potentially match the performance of accelerators for specific tasks, while exceeding the performance of any accelerator traditional architecture combination for general tasks. I will conclude by discussing our results with Demand-driven Execution (DDE), whose form follows this single-assignment program representation.

About SAMOS (from http://samos-conference.com/): SAMOS is a unique conference. It deals with embedded systems (sort of) but that is not what makes it different. It brings together every year researchers from both academia and industry on the quiet and inspiring northern mountainside of the Mediterranean island of Samos, which in itself is different. But more importantly, it really fosters collaboration rather than competition. Formal and intensive technical sessions are only held in the mornings.A lively panel or distinguished keynote speaker ends the formal part of the day, and leads nicely into the afternoons and evenings — reserved for informal discussions, good food, and the inviting Aegean Sea. The conference papers will be published by Springer’s Lecture Notes in Computer Science – LNCS and will be included in the DBLP Database.

The workshop, presented by KEEN, a network of engineering faculty working to instill within student engineers an entrepreneurial mindset, introduced faculty participants to the framework of entrepreneurially minded learning (EML), which is centered on curiosity, connections, and creating value.  Hembroff and other participants identified opportunities for EML integration into existing coursework, developed a personal approach to integrating EML within the course design process, and learned how to implement continual improvement of their own EML practice.