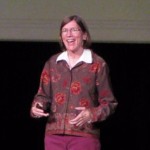 Barbara Oakley, a professor of industrial and systems engineering at Oakland University and author of several books, spoke at Michigan Tech Sept. 3 for the First Year Engineering and Computer Sciences Lecture. She presented a talk on “Learning How to Learn” at the Rozsa Center to over 1200 students.

Oakley also met with faculty in a presentation about her MOOC (Massive Open Online Course). This course is one of the most popular courses in the world, with well over half a million students in its first six months alone. Learning How to Learn is based on the book A Mind for Numbers. Oakley’s latest book is “A Mind for Numbers: How to Excel in Math and Science (Even If You Flunked Algebra).”

Oakley herself has learned from experience to apply the perspectives of many fields to learning and to life. Originally intending to become a linguist, she earned her bachelor’s degree in slavic languages and literature. After working for the Army as a signal officer, she returned to school to study engineering so that she could better understand the communications equipment that the Army used.

She earned a Bachelor of Science in electrical engineering and worked as a translator on Russian trawlers in the Bering Sea. Oakley also spent a season as the radio operator at the South Pole Station in Antarctica, where she met her husband, Philip. They moved to the Detroit area, where she earned a master’s degree in electrical and computer engineering and a doctorate in systems engineering. She has been teaching at Oakland University ever since.

See the Video of Barbara Oakley: Learning How to Learn