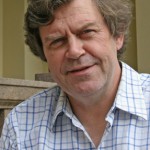 The calibration of longitude in the mid-eighteenth century by the invention of a sea-going chronometer gave mariners confidence that they could reliably calculate their absolute position on the Earth’s surface. Until recently, Earth scientists have been in the comparable position of having no way of calculating the longitudes of continents before the Cretaceous, leaving paleomagnetism, which cannot determine longitude, as the only quantitative means of positioning continents on the globe before that time. However, by choosing a reference continent that has moved the least longitudinally (i.e. Africa), longitudinal uncertainty can be minimized. The analytical trick is to rotate all paleomagnetic poles to Africa and calculate a global apparent polar wander path in African co-ordinates, which serves as the basis for subsequent global reconstructions. This method is dubbed the ‘zero-longitudinal motion’ approximation for Africa, and has allowed us to confidently estimate true polar wander (TPW) since Pangea formation (320 Ma), and to demonstrate that ancient large igneous provinces and kimberlites have been sourced by plumes from the edges of the large low shear-wave velocity provinces (LLSVPs) on the core-mantle boundary beneath Africa and the Pacific. Using this surface-to-CMB correlation and a new iterative approach for defining a palaeomagnetic reference frame corrected for TPW, we have developed a model for absolute plate motion back to earliest Paleozoic time that maintains the remarkable link between surface volcanism and the LLSVPs. For the Paleozoic we have for the first time identified several phases of slow, oscillatory TPW (less than 1 degree/Myr) during which the Earth’s axis of minimum moment of inertia was similar to that of Mesozoic times. We model ten phases of clockwise and counter-clockwise rotations since 540 Ma, which can be interpreted as oscillatory swings approximately around the same axis (11 degrees East at equator). Net TPW angles peaked at 22 degrees in the Mesozoic and 62 degrees in the Paleozoic, and paleomagnetic and TPW-corrected (mantle) reconstructions therefore differ significantly in the early Paleozoic.