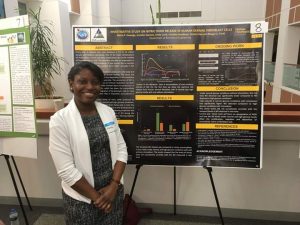 I started my doctoral program in Biomedical Engineering at Michigan Tech in the summer of 2015.  Previously I obtained my BS Degree in Medicine from the University of Algiers in Algeria. I joined Dr. Frost’s lab that specializes in controlled NO releasing polymeric biomaterials for clinical applications. My research interests are focused on understanding the role that Nitric oxide (NO) plays in cardiovascular pathologies such as Ischemic heart disease and Diabetes. Cardiovascular calcification is frequently associated with ischemic heart disease and it increases the risk of heart attacks and stroke in patients. NO has been shown to aggravate and protect against calcification. The effect of NO highly depends on the concentration and duration of treatment delivered. A novel device (the CellNO trap) was previously developed in Dr. Frost’s lab that makes it possible to measure the levels of NO produced and delivered to cells.  With the CellNO trap, we are able to determine with accuracy the point at which NO changes from a protective to aggravating effect in vascular cells in order to slow down the progression of calcification. Another area of my project is improving treatments for diabetic foot ulcers (DFU). Healing is impaired in patients with DFU, it takes on average 120 days for these wounds to close, which increases the risk of infection and amputations. NO is a free radical molecule with a very versatile role in the body and it has been shown to be involved in all the stages of wound healing. We use the CellNO trap to measure the real- time NO produced by cells involved in wound healing under normal and diabetic conditions. The goal is to incorporate the NO levels obtained into controlled NO release wound dressing that can be finely tuned to deliver the dose of NO necessary at each stage of  wound healing. This platform will facilitate the healing of DFU in the shortest time possible. I would like to thank my mentor and   advisor Dr. Megan C. Frost for all the support she has offered to me and I would like to thank the Dean and the Graduate school for awarding me the finishing fellowship for the spring semester. The funds offered will give me the time to finish my experiments and write my dissertation so that I can complete the requirements for my PhD program.