Professor Miguel Levy (Physics) has been named a Fellow of The Optical Society, which brings together scientists, engineers, educators, technicians and business leaders in the fields of optics and photonics. Election to the rank of Fellow is based on outstanding contributions to optics through accomplishments in science and engineering, technical leadership and impact on the optics community. Levy was recognized for outstanding and fundamental contributions in the areas of magneto-optic and opto-electronic films, and extensions of the theory and applications of magneto-optic photonic crystals.

Michigan Tech has nominated four undergraduates for 2012 Barry M. Goldwater Scholarships. Physics major Ben Malec is one of the nominees. Malec tracks particles in a turbulent fluid in which gravitational settling also plays a role. He hopes to apply what he learns to better understand the behavior of clouds.

AsfalisMed has made it to the top five ideas in the Intel Innovators Competition. The team earned almost 10 million Social Capital Points from virtual investors. The Round 2 Battleground begins on January 26, 2012. The five finalists compete for a $50K award from the Panelists and $50K from the Top Fan. For more information or to participate, search for Intel Innovators in Facebook. AsfalisMed is the entrepreneurial concept of Michigan Tech students Travis Beaulieu and Joel Florek.

Cosmic race ends in a tie 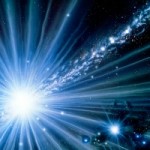 Result puts limit on how ‘lumpy’ space-time can be.
A race between two energetic photons that began more than 7 billion years ago and spanned half the cosmos has ended in a virtual dead heat. The result, if it stands up to scrutiny, would tighten the limits, suggested by some theories, on how ‘lumpy’ space-time can be. The work, to be presented on 11 January at the 219th meeting of the American Astronomical Society in Austin, Texas, by Robert Nemiroff of the Michigan Technological University in Houghton and his colleagues, relies on an analysis of a short-lived, powerful stellar explosion known as a γ-ray burst that was recorded by NASA’s Fermi Gamma-ray Space Telescope in May 2009 and dubbed GRB 090510A. The study focused on two photons, one with an energy of 25 gigaelectronvolts (GeV) and another of about 1.5 GeV, which were separated by just 0.00136 seconds. READ MORE