Nemiroff on the Not-There Universe 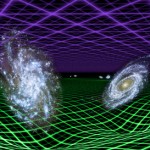 The Discover blog “Out There” features Professor Robert Nemiroff’s (Physics) research on the nature of spacetime. In “Dispatches from AAS: The Not-There Universe,” editor Corey Powell writes about three discoveries that are remarkable for what they did not find and quotes Nemiroff as saying “perhaps the golden age of cosmology is not over just yet. There may be more discoveries out there.”

Special for classic rock fans: Powell draws a parallel with the 1960s Zombies hit “She’s Not There.”

Dispatches from AAS: The Not-There Universe

Albert Einstein’s general theory of relativity implies that space should be smooth at very small distances, just as it is smooth at the distances we experience. Some newer theories, which attempt to go beyond relativity, suggest otherwise: They predict that sub-subatomic space is a froth of unseen particles and energy. Nemiroff figured out a way to see who is right. He tracked gamma rays—radiation that is like light but much more energetic—from an exploding star roughly 7 billion light years from Earth, and looked for signs that they had scattered off any frothy space along the way. He found none. For the umpteenth time, a challenge to Einstein has failed.