It’s a rain race out there. In the meteorological equivalent of breaking the light-speed barrier, new research shows that the smaller droplets in a rainstorm often surpass what appears to be the speed limit for rain.

“What surprised us was not so much seeing the superterminal drops,” says physicist and co-author Raymond Shaw of MTU, “but seeing the deeper, compelling patterns.” He explains that as rain falls harder, the fraction of superterminal, or speeding, small drops increases.

Read more at Science Magazine, by Phil Berardelli. This article was posted on June 12, 2009.

A network of optical disdrometers (including laser precipitation monitors and a 2-dimensional video disdrometer) was utilized to determine whether the recent reports of “super-terminal” raindrops were spurious results of drop breakup occurring on instrumentation. Results unequivocally show that super-terminal raindrops at small (less than 1 mm) sizes are ubiquitous, are measurable over an extended area, and appear in every rain event investigated.

Confirmed: Some raindrops fall faster than they should

Five years ago, scientists reported that raindrops, especially small ones, often fall through the air much faster than they should. Some researchers have suggested that these “super-terminal” raindrops (ones traveling more than 30% faster than their terminal velocity, at which air resistance prevents further acceleration due to gravity) were fragments of larger drops that had splattered off the team’s instruments, with the smaller bits retaining the speed the larger drop had before it struck the instrument. But new research hints that the speedier-than-expected drops are the result of natural processes—and that, moreover, they make up a substantial fraction of rainfall.

Read more at Science Magazine, by Sid Perkins. This article was posted on August 26, 2014. 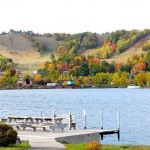 Physics Department Picnic and Social
Where: Houghton City Park (same location as last yr)
Located by the Super 8 Motel
When: Thursday, August 28th, 2014, at 11:30 AM
Who: Everyone – Faculty, Staff, Graduate Students,
Undergraduate Students and Families etc.

Understanding the electronic structure and the transport property of nano scale materials is of fundamental importance, since these materials are the ultimate candidates for the future of nano technology. Several nano materials, such as quantum dots, semiconducting nano-wires, and organic molecules, have been explored both theoretically and experimentally as the components of electronic circuitry over the last two decades. Among several interesting nano materials, metal free magnetic nano materials are found to be very enticing due to the presence of magnetism in the absence of magnetic ions. Traditionally, the magnetism comes from partially occupied d and f states in the materials; however, this understanding is not always true since s and p states are found to contribute to the magnetism in the metal free magnetic materials. The main advantage of these materials is their high Curie temperature; as a result, they can be utilized in room temperature spin-electronics (spintronics). Recently, using a first-principles approach, we have demonstrated that the fluorinated boron nitride nanotube (BNNT), which is a metal-free magnetic entity, can be used as an excellent spin filter. All majority spin carriers are almost completely blocked while passing through the fluorinated BNNT channel, allowing only the minority spin carriers to pass. We have shown that the long range ferromagnetic spin ordering in fluorinated BNNTs occurs at a temperature much above room temperature.

By Kamal B. Dhungana

An image by Professor Yoke Khin Yap (Physics) is highlighted in the National Science Foundation SEE (Science, Engineering and Education) Innovation blog dated Aug. 17 as the Crystal of the Week. The photo features water droplets atop a boron nitride nanotube film, which is superhydrophobic.