Exhibit: The Making of Modern Houghton 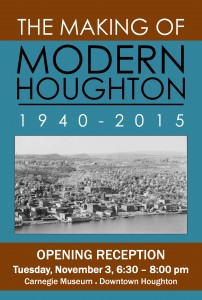 Carol MacLennan and her former students in Ethnographic Methods presented their work from Spring 2014 in an exhibit — The Making of Modern Houghton at the Carnegie Museum in Houghton November 3.  Reyna Bennett, Marc Hoffman, and Brenna Thompson discussed their research and that of four other students (who have since graduated) on Houghton’s post World War II history at a reception opening the exhibit.  The exhibit covers Houghton’s post mining development into an expanding city, changes in the commercial district and transportation,  the development of diversity and expansion at MTU, and city celebrations such as Parade of Nations and Old Settlers Ball.