The Department of Social Sciences (SS) would like to recognize the following outstanding undergraduate and graduate students. These awards were recently presented at the departmental end-of-year celebration on April 15th. Honors were extended for excellence in academics, research and teaching.

Well done to all our incredible students! 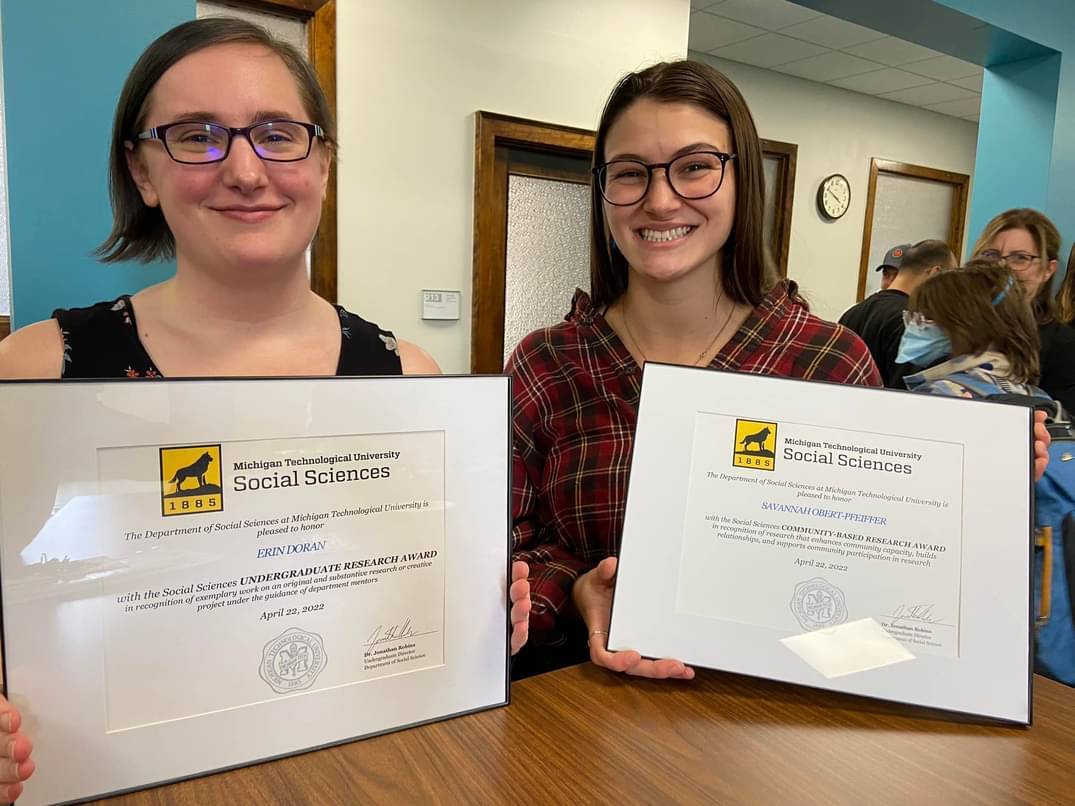 On the Road and In Print

Dr. Steven Walton presented a paper on “Allied Expositionary Forces: War Trophies in America after the Great War” at the Society for Military History conference in Fort Worth, TX on April 29. The work is an extension of the WWI centenary activities developed on campus in 2018 (World War One and the Copper Country) and his work for the edited book, Home Front in the American Heartland: Local Experiences and Legacies of WWI (Cambridge Scholars Publishing, 2020)

Hongmei Lu ’20 (Ph.D., environmental and energy policy) and Shan Zhou (SS) have published a co-authored paper in the Journal of Asian Public Policy.

The paper uses a case study to understand how local policy implementers take advantages of policy goal ambiguity to maximize the policy outcomes of urban stormwater management program in China, given constrained resources and budget.

Learn more about the work via the Michigan Tech Digital Commons.

Adam Wellstead is the lead author of a study published in Current Opinion in Environmental Sustainability.

The paper, titled “Finding the sweet spot in climate policy: balancing stakeholder engagement with bureaucratic autonomy,” discusses the role of bureaucratic autonomy and stakeholder engagement in the climate change policy process and the “sweet spot” between both — which differs from country to country depending on administrative tradition and policy style.

Robbert Biesbroek of Wageningen University in The Netherlands is a co-author of the paper.

Drs. Lafreniere and Trepal will serve as project co-PIs along with Wayne State Department of Anthropology Chair Dr. Krysta Ryzewski. Greg Kowalski, the Executive Director of the Hamtramck Historical Museum, and the Hamtramck Historical Museum’s Board of Directors will also collaborate on the project. The grant will fund Michigan Technological anthropology graduate students to assist with the 18-month project, which is scheduled to begin in June 2022.

The Hamtramck Historic Spatial Archaeology Project received NEH funding from the Preservation Access Research and Development Grant Program to support the early-stage development of a Historic Spatial Data Infrastructure (HSDI). This project will be among the first attempts to link archival, archaeological, and geospatial data across time and space. The HSDI will be designed to remedy disconnections between historical and archaeological data sets. These disconnections between different forms and types of data pose significant shortcomings for examining the histories of less visible, historically underrepresented communities, whose traces tend to survive more prominently in the archaeological record. This is especially the case in Metro Detroit, a region shaped by prominent processes of industrial expansion and urbanization over the past century. For Hamtramck and Detroit’s historically marginalized and underrepresented communities, this lack of data integration reinforces long-standing barriers to access and exclusion from cultural heritage narratives.

Over the course of the project, the Hamtramck Historic Spatial Archaeology Project team, including MTU Industrial Archaeology and Heritage students, will produce a prototype HSDI based on the case study of the Old Hamtramck Center site, where Wayne State University archaeology students have been conducting excavations since 2018. The Hamtramck HSDI will result in the creation of a prototype open-access digital deep map of Hamtramck. The HSDI and the digital deep map will demonstrate how seemingly disparate strands of historical knowledge can be evaluated, integrated, and represented in a digital, open-access format. This open-access digital deep map will improve public access to cultural heritage information, preserve digital data, and establish an advanced mode for organizing and analyzing historical and archaeological data.

“Archaeologists and historians are increasingly using digital methods for collecting and working with information about the past, but we have still barely scratched the surface of what is possible – especially when it comes to working with both archaeological and historical information together,” observed Dr. Trepal. He continued “The Hamtramck Historic Spatial Archaeology Project is a wonderful opportunity to link together several different kinds of historical and archaeological evidence, in a digital, spatial environment, to create something greater than the sum of its parts. It is all about pushing the envelope in how we use digital technologies to tell stories surrounding a place and community from multiple dimensions, for scholarly research and also for collaborating with the public.”

The first phase of the project in 2022 coincides with the 100th anniversary of Hamtramck’s founding as a city in 1922. The city and the museum are planning major commemorative events throughout the year and the project team will participate to help attract new audiences into the Hamtramck Historical Museum, engage them in conversations about Hamtramck’s immigrant and working-class heritage, and promote the role of historical and archaeological data in contributing to its preservation.

To learn more about the Hamtramck Historic Spatial Archaeology Project, contact Dr. Lafreniere at djlafren@mtu.edu and Dr. Trepal at djtrepal@mtul.edu.

Congratulations to our December Graduates

Congratulations to our December graduates who have earned the following degrees:

MASTER OF SCIENCE IN INDUSTRIAL HERITAGE AND ARCHAEOLOGY
Gary Spikberg
Topic: Augmented Reality as a Tool for Industrial Heritage Education and Interpretations

Students in Richelle Winkler’s Introduction to Sociology class are hosting a virtual Health & Society Film Festival, and invite the public to participate.

The students have selected 11 films ranging from documentaries to comedy and drama. Films address mental health, pandemics, social movements in response to AIDS, birth control, substance abuse, pharmaceuticals, stress, racism, eugenics, maternal mortality and death/dying. The films are all widely available and we ask folks to watch them on their own first, then to participate in Zoom discussions about them and what we can learn from them about health and society.

Discussions will be held between Nov. 16 and Dec. 6, depending on the film. See our website for film descriptions, where to watch, discussion dates/times and links to join the discussion.
Information on the film festival is located here.