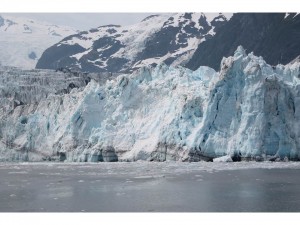 I’m live-blogging this week from the US-IALE conference in Anchorage Alaska….. a lot of great discussions going on here!

Brian Czech from the Center for the Advancement of the Steady State Economy gave our plenary talk this morning about sustainable natural resource management and ecological economics. He cautioned us to be mindful of the words we use, particularly development vs. growth. Growth implies that an increasing amount of natural resources will be used over time, and the economy will expand. Development, on the other hand, allows for maintaining natural resource use at current levels, but changing how we use them (e.g., more efficiently and effectively).

Just an hour later, a presenter discussed how the Bureau of Land Management sets and works towards landscape management goals for the Prudhoe Bay area, including “sustainable economic development of natural resources”, however it became clear that BLM is really referring to “sustainable economic growth”. Brian was on-hand to point out the vast policy implications of this terminology choice; a very instructive lesson!

UP Landscapes exhibit at the Beaumier Center at NMU

A new art exhibit, “U.P. Mosaic: A Working Landscape and its People” will open this month on the Northern Michigan University campus. Although the information is not yet up on the Beaumier Upper Peninsula Heritage Center‘s webpage, you can find details about the events on opening day (October 26th) through the Marquette Monthly magazine. The exhibit will run from October 26 through January 15, 2014, and will be open 10am to 4pm Monday through Saturday.

All of this has happened before

Although summers are quite busy, usually I try to find the time to read several books that have been occupying the corner of my desk during the academic year. I have finally read a book on my “meaning to get to” list for years: “Prehistoric Native Americans and Ecological Change,” (Cambridge University Press), by the professors who taught me landscape ecology, Paul and Hazel Delcourt.

Originally published in 2004, the book combines archaeology and paleoecology to describe how landscapes in North America were changed by human societies long before Europeans arrived. Ecologists especially have always believed that pre-European societies had little lasting impact on ecosystems in North America. This belief underpins many conservation biology targets for habitat and species restoration. However, the Delcourts describe thriving human societies in Ontario, southern Illinois and Eastern Tennessee that used fire and forest harvesting to support their agriculture-based societies, dramatically increasing nut-bearing trees and pioneer species (such as ragweed) at the expense of species adapted to mature forests. These changes, made at increasingly large scales, may have also increased herbivore species such as white-tailed deer that thrive in early-successional and edge woodland habitats.

The book is framed by Panarchy theory, and explains how these changes, when they reached a critical proportion of the surrounding landscape, created greater disturbances (such as floods) that likely led to the area being abandoned by these societies, long before Europeans arrived on the scene. These events are a reminder that humans, like all species, alter their environments. Sometimes these alterations are beneficial in the short term, but often they are detrimental in the long term. Even with small-scale disturbances (such as slash-and-burn agriculture), if the period allowed for ecosystem regeneration is too short, soil fertility can decline and ultimately the practice becomes unsustainable.

Of course, the lessons we gain from the distant past (14,000 to 500 years before present) are limited in their applicability. North America is now home to over 400 million people, almost two orders of magnitude larger than it has ever supported before. It may be that the agricultural and settlement practices of even the most sustainable of these early societies would be completely unsustainable today. But what we can learn is that our impacts will certainly be available for study for a long, long time.

Dr. Virginia Dale from Oak Ridge National Laboratory will be giving a talk, “Steps toward sustainability of bioenergy”, on Friday November 11th at 12:30pm, in G002 in the Noblet Forestry building. Her talk is free and open to the public.