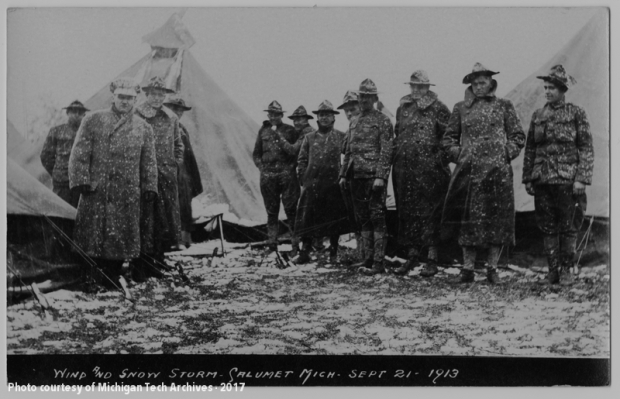 National Guardsmen assigned to strike duty in Calumet found themselves in the midst of a freak snowstorm.

We’re no stranger to snow here in the Copper Country, but getting a taste of winter in September is unusual even for us. The bizarre weather and the tumult of the Western Federation of Miners copper strike combined to make September 1913 noteworthy for Houghton County.

On September 19, what the Calumet News described as “a freakish barometric disturbance” formed over Winnipeg and began to drift eastward. As it reached the Midwest on September 20, the storm apparently stalled, pummeling the Keweenaw Peninsula for nearly forty-eight hours. The weather bureau recorded winds of almost forty miles per hour, a number more typical of November weather than balmy September. Rain and sleet fell in sheets. The precipitation and high winds downed telephone lines and cut off service to some 600 phones, mostly in Calumet and Laurium.

Most notably, however, the storm blanketed the Copper Country with nearly three inches of snow. National Guardsmen called to Calumet to enforce order during the strike peeked out from their tents to find their neighbors’ shelters collapsed and coated in ice. A photographer captured five images of the storm’s aftermath in the camp on September 21, showing men with hands shoved into military-issued coat pockets, surveying the damage, squinting against the howling wind, and perhaps questioning their decision to join the National Guard. The images have since become part of the Brockway Photograph Collection (MS-019) at the Michigan Tech Archives. 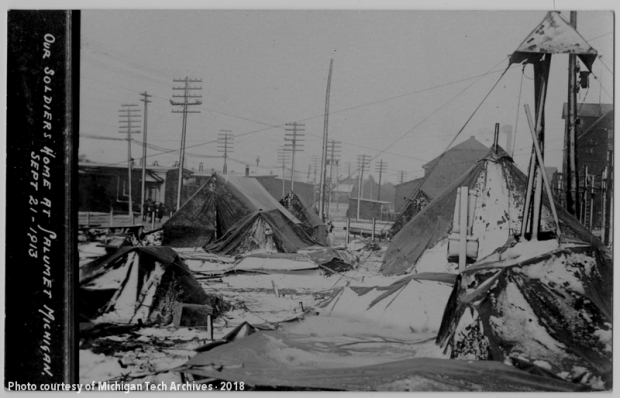 Tents in the National Guard encampment fared poorly in the wintry gale.

It was a scene that could only have happened in 1913. At no other time in the Copper Country history could the weather and the course of labor relations have conspired to put these men and their camp in the midst of a September snowstorm.

Luckily, the forecast for Houghton County doesn’t include any snow for the foreseeable future. We will simply have to wait and watch to find out when those first flakes may fall. Anyone care to take a guess?